Junior Seau inducted into Hall of Fame by daughter: 'You were everything' 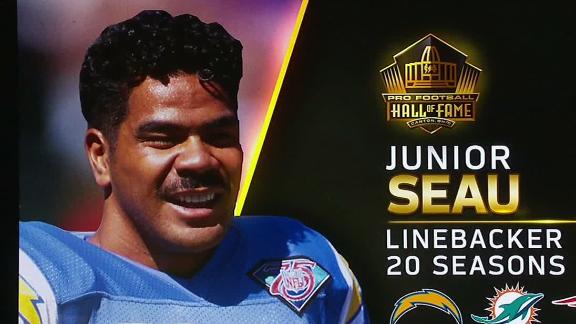 CANTON, Ohio -- Junior Seau won't be forgotten, and his daughter reminded why.

Sydney Seau and her three brothers Saturday unveiled Seau's Hall of Fame bust in Canton, followed by a speech from Sydney on what made her father, a 20-year NFL great, who he is.

She also felt his anguish. Seau committed suicide in May 2012.

"You gave us your heart," said Sydney to her father from the side of the stage at Tom Benson Stadium. "I know at times it seems like everything you accomplish in life wasn't enough. ... You were more than just enough. You were everything. ... My buddy, you are a light."

Sydney's words focused on Seau's legacy, not the story surrounding Seau's death. The Seau family is reportedly pursuing a lawsuit against the NFL over Seau's concussion history that possibly triggered his suicide.

The Hall of Fame adopted a policy in 2010 that prevents giving speeches on behalf of deceased inductees, but they made an exception in this case.

Seau, who helped shape the modern linebacker position and guided the Chargers to the Super Bowl, was "just a passionate human being," an emotional Sydney said.

"He was so gentle and loving and just as passionate about his family as he was the sport," she said.

"What you're doing behind the scenes is just as important as what you do in the limelight," Sydney said. "I can't be more proud of the player he was and the person he became. My father would be completely overwhelmed and honored."

Sydney Seau's speech Saturday may have been the emotional crescendo of the evening, but it was far from the only speech that carried emotional heft.

Jerome Bettis knew his audience well, using his Hall of Fame induction platform to enliven the large Steelers contingent at his induction ceremony.

Bettis, who played 10 of his 13 NFL seasons in Pittsburgh, started a "Here we go, Steelers" chant, asked for the Terrible Towels to wave, and said he felt at home after pulling his own out.

"The Bus will always and forever run in Canton, Ohio, home of the Pro Football Hall of Fame," said Bettis, the NFL's sixth-leading rusher.

Bettis split his speech into two parts, first thanking all his family, friends and coaches before his Steelers days, then diving into his championship years with the team.

To coach Bill Cowher, who was in Ireland for his daughter's wedding, Bettis thanked him for his blue-collar style and asked him to drink a pint for No. 36.

"Three yards and a cloud of dust was far better than a 40-yard bomb down the football field," Bettis said.

Bettis was revealing when acknowledging quarterbackBen Roethlisberger, who made an open-field tackle to prevent a Colts touchdown off Bettis' goal-line fumble in the 2005 AFC Championship Game. The Steelers were up 21-18 in the final minutes and could have lost because ofBettis' miscue.

"Brother, without you saving that tackle, I still might be on the doorsteps, brother," Roethlisberger said. "I owe you for life."

The crowd grew lively before the ceremony when thousands of Steelers fans began swinging Terrible Towels.

The Steelers' intense fandom, coupled with Canton's proximity to Pittsburgh, brought out the black and gold.

"A Steeler home game, who knew?" ESPN's Chris Berman said from the podium as he announced Steelers chairman Dan Rooney, along with the rest of the Hall recipients in attendance.

Former defensive end Charles Haley, the only NFL player with a Super Bowl ring for all five fingers, delivered an emotional induction speech of his own.

"My life spiraled out of control for years," said Haley, a 49ers and Cowboys great, after thanking his kids for their support. "But today, I get to go back to the locker room, to my teammates, and tell them the mistakes that I made. The only way you can grow is you've got to ask for help.

"I take my medicine every day. And I try to inspire others to do the same."

Haley said he always thought "everyone was against me" coming into the league, but that started to change with 49ers owner Eddie DeBartolo Jr., who drafted Haley in the fourth round in 1986.

Haley won three Super Bowls and an NFC Defensive Player of the Year award with the Cowboys after the 49ers traded him in 1992.

"That was probably the biggest mistake I made as an owner," said DeBartolo Jr., who presented Haley, about the trade.

Haley kept it light from the podium, telling a funny story about driving a golf cart on the green because he didn't know the difference between that and the fairway. He thanked several teammates.

"I've played with some of the greatest players in the history of football," Haley said. "It's not about individuals. It's about team."

Like Haley, Brown played for just two NFL teams, but he's best known for playing 15 of his 16 seasons with the Raiders.

During his Hall of Fame induction speech, he listed the 19 quarterbacks that threw a completion to him during his career, from Todd Marinovich to Rich Gannon. And he still had nine straight seasons of 1,000 or more yards as a Raider.

"I can't wait to enjoy this the rest of my life," Brown said.

In a sprawling 31-minute speech that covered ground from much of his life, Brown got a rise out of Raider Nation with a "Raiders, Raiders, Raiders" chant for the Steelers-heavy Canton crowd -- "I know we may be outnumbered."

He referred to former Raiders coach Jon Gruden as "Gru-dog." Brown went from playing on a high school team in Dallas that went 4-25-1 to winning a Heisman Trophy at Notre Dame and, now, this.

"He had more confidence in me than I had in myself," Brown said.

Former Vikings center Tinglehoff, a former 17-year veteran, didn't deliver a speech, but former teammate Fran Tarkenton walked to the podium with him and said Tinglehoff is "a man of little words but a lot of action."

Tinglehoff is 75 and has had some health issues.

Tarkenton got emotional when he told the crowd Tinglehoff waited 37 years -- through 32 years of eligibility, plus the five mandatory years players must wait before consideration -- to enter the Hall.

Wolf, the man who brought Brett Favre to Green Bay, led off the festivities.

Wolf spent 23 seasons with the Raiders, helping the organization to a pair of Super Bowl titles. He took over as general manager in Green Bay in 1991. He hired coach Mike Holmgren to revive the struggling franchise and orchestrated a trade that brought Favre to Green Bay from Atlanta.

"To succeed in this game, you have to love it and respect its history," said Wolf, who ended his speech with a "Go Pack Go!"

The Packers went on to win one Super Bowl and appear in another with Wolf at the helm. Wolf was presented for induction by his son Eliot, who is the director of pro personnel for Green Bay.

The outspoken Haley said he he wants people to remember the passion with which he played the game. Haley seemed to be at his best in big moments, collecting an additional 11 postseason sacks during his 13-year career split between two NFL dynasties in Dallas and San Francisco.

Leave it up to Jim Kelly to put the ball where it needed to be when inducting Polian.

"If you had talent, Bill Polian was going to find you," Kelly said.

That's the rep six NFL executive of the year awards earned Polian, who reflected on his three-plus-decades in the NFL that spanned three general manager stints, a Super Bowl win with the Colts and three straight AFC titles with the Bills from 1990-92.

Polian cited Lou Gehrig's "luckiest man' speech to express his gratitude, listing several players, coaches and scouts with whom he worked. Polian also guided the roster of the expansion Panthers from 1995-97, which included an NFC Championship Game appearance.

"A journey on a boat from Ireland led to Canton," Polian said. "The impossible dreams have all come true."

Toward the end of his speech, Polian mentioned "of course, number 18, Peyton Manning," who was in attendance, and joked he might not be around for Manning's introduction if the 39-year-old keeps playing.

"Wherever I am, I will be thrilled and proud," said Polian to Manning.

Turns out Polian's ability to adapt set him apart. When addressing Tony Dungy and calling him "America's Coach," Polian joked he respected the former Colts coach so much that he "cleaned up his language for him.

"Never has one person owed so much to so many," Polian said.

He made it to Canton in his fourth year of eligibility.

The 6-foot-3 Shields joked he's glad he didn't grow another couple of inches because if he was taller he might have been moved to tackle and might not have ended up in Canton.

Shields was presented for induction by good friend Adrian Lunsford.

Junior Seau honored by his daughter
Sydney Seau, Junior Seau's daughter, provides a heartfelt speech about her father as he is inducted into the Pro Football Hall of Fame.

Bettis on Seau: 'His legacy will live on forever'
Jerome Bettis pays tribute to Junior Seau during his Pro Football Hall of Fame induction speech.