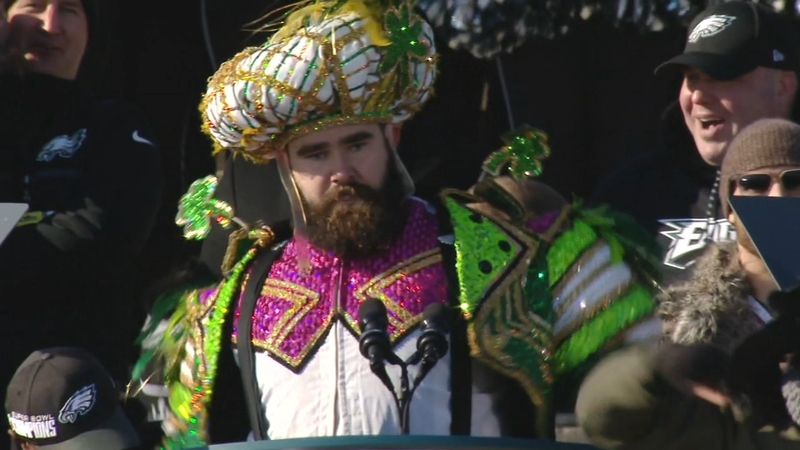 PHILADELPHIA (WPVI) -- Many fans remember an iconic moment from the Eagles' victory parade when Jason Kelce sported a Mummer's costume.

Now a local company is making that wild outfit available to everyone just in time for football season and Halloween.

When it came to celebrating the Eagles Super Bowl victory. There was one parade moment that was so Philly it sang.

"My wife and I were watching the parade and Kelce and during his speech it was awesome," said Robert Berman, CEO of Rasta Imposta.

Rasta Imposta is a homegrown costume company in Runnemede, New Jersey that's been distributing original designs across the globe for 25 years.

Many are nods to local icons like the cheesesteak hat.

"We made it so it's cut off exactly how half of a cheesesteak looks - so good you can eat it!" said Berman.

And now the Philly parade costume.

"We feel that it's going to explode," added Berman.

To get the rights they reached out to James May who created the original design.

"We met with him and his wife and a couple of days later we started getting the design made for a costume that could be worn by the fans," said Berman.

And for a fraction of the price.

"Mummers costumes could be 2,3, 4 thousand each we wanted to create something designed and made for fans to wear to a tailgate, to the first game, Halloween," said Berman.

You can buy the pieces separately or the whole look for $125. Rasta Imposta sells online and now in Chickie's and Pete's locations.