Kenny Atkinson to take over as coach of the Nets 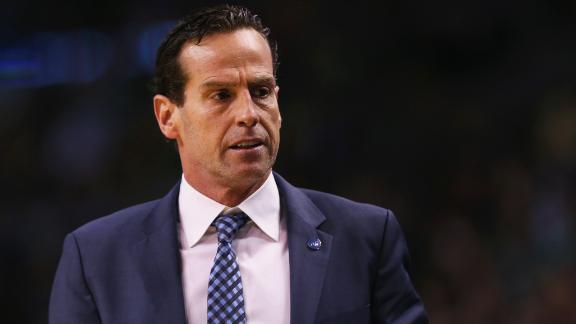 Atkinson will continue with the Hawks until the end of the team's postseason run.

"We are thrilled to announce Kenny Atkinson as our new head coach and to welcome him and his family to Brooklyn," Nets general manager Sean Marks said in a statement. "Kenny's years of NBA coaching experience working under successful head coaches such as Mike Budenholzer and Mike D'Antoni have provided him with the foundation and experience we were looking for in a head coach. We believe that Kenny's core principles, leadership, communication skills and exceptional background in player development make him an ideal fit for the culture we are building in Brooklyn."

The Nets fired second-year coach Hollins in January with the team off to a 10-27 start. Under interim coach Brown, Brooklyn went on to finish 21-61 -- its worst showing since the 2009-10 season and the second-worst mark in the Eastern Conference.

"I'd like to extend a personal welcome to Kenny and wish all of us success as we begin a new era at the Brooklyn Nets," Nets owner Mikhail Prokhorov said. "Aside from his tremendous skills and experience, he has the mindset we need to build a winning team day by day, step by step. Together, we can do great things."

Atkinson coached under Budenholzer in Atlanta. Budenholzer previously was a longtime assistant in San Antonio, where Marks spent time as a player, assistant coach and front-office member.

"I am truly honored and humbled to be named the head coach of the Brooklyn Nets, and I would like to thank Nets' ownership and management for this tremendous opportunity," said Atkinson in the Nets statement. "Together with Sean and his staff, we look forward to building a winning tradition here in Brooklyn. I also want to acknowledge and thank Mike Budenholzer and the entire Atlanta Hawks organization for their cooperation and support throughout this process. While I am eager to begin working with the Nets, I remain committed to my coaching responsibilities with the Hawks for the remainder of the postseason."

The 48-year-old Atkinson starred at Richmond then played professionally in Europe. He also coached the Dominican Republic in last year's FIBA Americas tournament and has been an assistant for the Ukraine.