Kopitar scores in SO to lift Kings past Flyers, 3-2 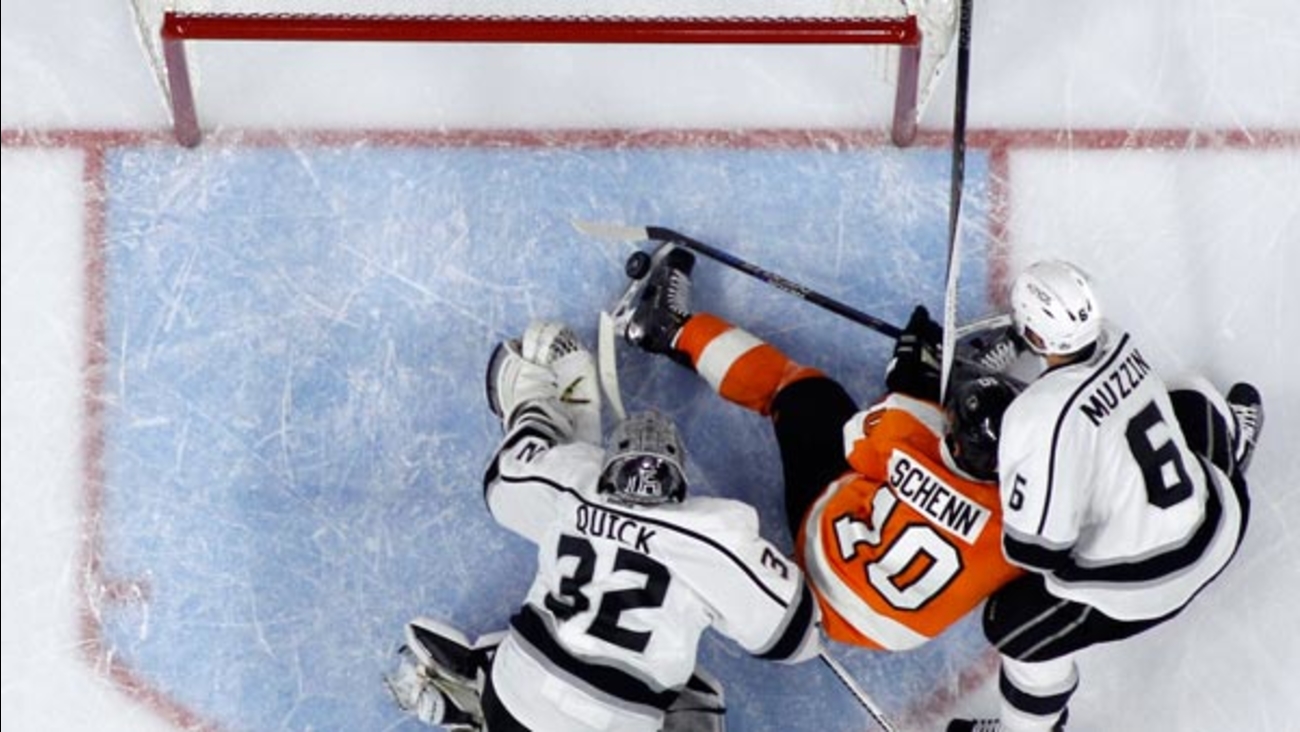 PHILADELPHIA -- Anze Kopitar scored in the shootout to lead the Los Angeles Kings to a 3-2 victory over the Philadelphia Flyers on Tuesday night.

Milan Lucic and Jamie McBain scored in regulation for Los Angeles, which opened a five-game road trip with its 12th win in the last 15 games while improving to 5-1 on the road this season.

Claude Giroux and Shayne Gostisbehere scored in regulation for Philadelphia.

Jonathan Quick had 36 saves through overtime for the Kings, and then stopped Sam Gagner, Giroux and Jakub Voracek in the shootout.

Philadelphia's Steve Mason had 38 saves and a stop on Jeff Carter in the shootout.

Giroux gave the Flyers a 2-1 lead with 8:49 left in the third period. Voracek set up the goal with a pass from behind the net to Giroux in the slot. The Flyers' captain spun and fired a wrist shot that beat Quick to the left side.

Lucic tied the game with 55.7 seconds left in regulation. Jake Muzzin's initial shot from the blue line first deflected off Philadelphia's Sean Couturier and then the Kings' Tyler Toffoli before hitting the post, where Lucic was waiting to knock it in.

In the 3-on-3, five-minute overtime, both teams had opportunities to win it. Mason denied Marian Gaborik's backhander from close range. Philadelphia had two breakaway chances, but neither Giroux nor Michael Del Zotto could finish. Gostisbehere and Pierre-Edouard Bellemare also missed chances from close range.

Gostisbehere, who was called up prior to Philadelphia's 3-2 overtime win at Carolina on Saturday, scored his first career NHL goal 3:41 into the contest on a blast from the point to put the Flyers up 1-0.

Giroux assisted the power-play goal with a pass to Gostisbehere in the slot, and he fired a slap shot past Quick to snap Los Angeles' streak in 15 straight penalty kills. It was just the second power-play tally the Kings had allowed in their last 23 chances.

The Kings got their own power-play goal with 4:54 left in the first period to tie the game at 1. McBain's shot from the right point deflected off Flyers defenseman Luke Schenn and over Mason's stick to knot the game. Tanner Pearson earned his eighth point in the last seven games with an assist on the goal.

Philadelphia appeared to take a 2-1 lead with 10 1/2 minutes left in the second period, but a replay review overturned the officials' ruling on the ice that Brayden Schenn scored. The officials concluded that Schenn scored with a kicking motion.

Notes: The second of two meetings this season between the clubs will take place Jan. 2 in Los Angeles. ... In a pregame ceremony, Philadelphia honored former Flyers LW Simon Gagne, who retired prior to the season. ... Former Flyers coach Craig Berube, who was fired following last season, was in attendance as a scout for Hockey Canada. ... Philadelphia's Ryan White (upper body) sat out his first game after getting injured on Saturday night. He's expected to miss 2 to 4 weeks.