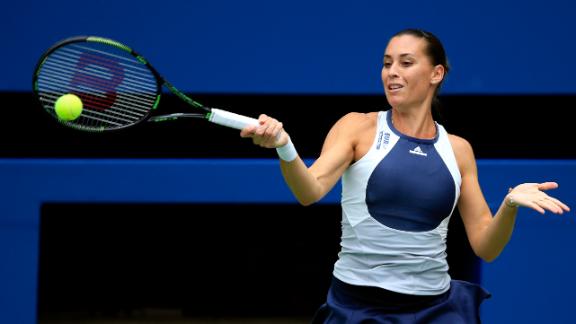 The unseeded Vinci couldn't capitalize on the momentum that came from a stunning semifinal upset of No. 1 seed Serena Williams on Friday, the day she called the best of her life.

Thus the 26th-seeded Pennetta captured her first major championship, at Arthur Ashe Stadium, becoming the oldest first-time Grand Slam champion ever. Instead of the single-season Slam that so many envisioned for Williams, it was another 33-year-old holding the sterling silver trophy afterward.

After a long embrace with Vinci at the net, Pennetta sprinted to her box, thanked her coaches and kissed fiance Fabio Fognini, who flew back from Italy to be at the match.

At the trophy presentation, Pennetta floored the sellout crowd by announcing she plans to retire at the end of the year.

"Before I started this tournament one month ago, I took a big decision in my life. This is the way I would like to say goodbye to tennis," she said.

Pennetta said she will play tournaments in Beijing and Wuhan, China. If she qualifies, she would also play in the WTA year-end event in Singapore.

"But for sure this one was the last New York for me," she said. "For sure."

Vinci's stunning three-set victory over Williams was widely regarded as the greatest upset ever at that late stage of a Grand Slam. At the outset of the tournament, Vinci was a 300-1 shot to win the major.

In retrospect, the 32-year-old's loss in the final was almost predictable. According to FiveThirtyEight.com, of the eight women who scored similar upsets in Grand Slam events, only one went on to win her next match.

"It was tough," Vinci said. "Past 24 hours with a lot of things on my mind. I was a little bit tired, especially in the first set.

"I try to do my best, but Flavia played unbelievable, great match. I just have to say congrats to her."

Pennetta's success was reminiscent of Italian Francesca Schiavone's unexpected title at Roland Garros five years ago. It was the only Grand Slam singles title of her career -- on the cusp of her 30th birthday.

Much has been made of the awkward, emotional nature of the matches played between Serena and Venus Williams. Similarly, this match couldn't have been easy either. Pennetta and Vinci grew up within 30 miles of each other in Italy and began playing each other at the age of 10. They were doubles partners in more than 50 junior events.

This was only the sixth time that two first-time finalists faced off in Grand Slam, and they earned their way there. Vinci, of course, beat Williams, and Pennetta eliminated No. 5 Petra Kvitova in the quarterfinals and No. 2 seed Simona Halep in the semifinals.

Vinci saved six break-point opportunities in the fifth game of the match but was broken on the seventh. She got the break back in the eighth game, and the opening set progressed to a tiebreaker.

The key point came with Pennetta serving at 5-4. Vinci, out of character, sent a forehand screaming long on a second serve. Pennetta converted her first set point with a 95 mph serve out wide that Vinci dumped into the net.

The last 10 women to win the first set of a Grand Slam singles final had gone on to win the match. At the US Open the number was 20.

Pennetta retires after US Open title
Flavia Pennetta announces her retirement after winning the US Open, her first major title.