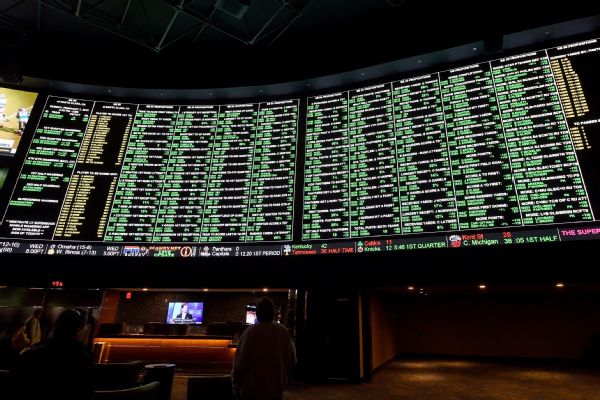 PHILADELPHIA -- The Eagles get to play the disrespect card for another week.

According to Westgate Las Vegas SuperBook, they will be 3.5 home underdogs to the Minnesota Vikings in Sunday's NFC Championship Game at Lincoln Financial Field.

Three-point underdogs to the Atlanta Falcons in the divisional round, the Eagles were the first No. 1 seed in NFL history to not be favored in its first game of the postseason. The organization pounced on this angle, playing up the idea that they were not getting their due. They even hung up copies of analyst predictions to show how many people were siding with the Falcons.

"Disrespect will not be tolerated!" cornerback Jalen Mills screamed before taking the field Saturday. Philly used that edge to help fight past Atlanta 15-10 and into the NFC Championship Game.

"I would imagine we're probably not going to be favored next week, either," Johnson predicted. "At this point in the season, it really don't matter. It's anybody's game."

Looks like Johnson will hold on to the mask for another week.

To that end, Johnson followed later Sundaywith a tweet indicating that he'll continue to embrace the underdog mentality against Minnesota.

"When didCarson [Wentz] go down? Since that point, no one's given us a chance," Eagles coach Doug Pederson said, referring to the quarterback's Dec. 10 ACL tear. "I understand Carson's a great player, but every week our guys are hearing the same thing. Now, all of a sudden, we're not good enough? We're 13-3, best record in football, home-field advantage throughout.

"The guys are gonna motivate themselves based on what they've heard for the last month. It really doesn't matter what you guys talk about because [our] locker room is united. I'll go to bat for every one of those guys. I'll go to war for every one of those guys in that dressing room."
Report a correction or typo
Related topics:
sportsespnminnesota vikingsnflnews chalkpoint spreadoddsgamblingphiladelphia eaglesbettingplayoffs
Copyright © 2021 ESPN Internet Ventures. All rights reserved.
TOP STORIES
Suspect in fatal Pat's attack turns himself in, warrants issued for 2
Suspects dressed as officers break into Roxborough home: Police
Body matching description of Gabby Petito found in Grand Teton: FBI
Eagles DE Brandon Graham injures Achilles, says he's out for season
Philly officials announce road closures in Center City
Flood victim given days to move out of apartment with missing floor
Samuel Adams' new beer is so strong it's illegal in 15 states
Show More
Live! Casino and Hotel hosting job fair
Eagles fall to 49ers 17-11 in home opener
32 injured after bus crashes on way home from retreat
Police name 2 suspects wanted for murder in Pat's Steaks beating
Police investigate shots fired, illegal street stunts near Temple
More TOP STORIES News