Lawmakers push for Curt Flood's enshrinement in Hall of Fame 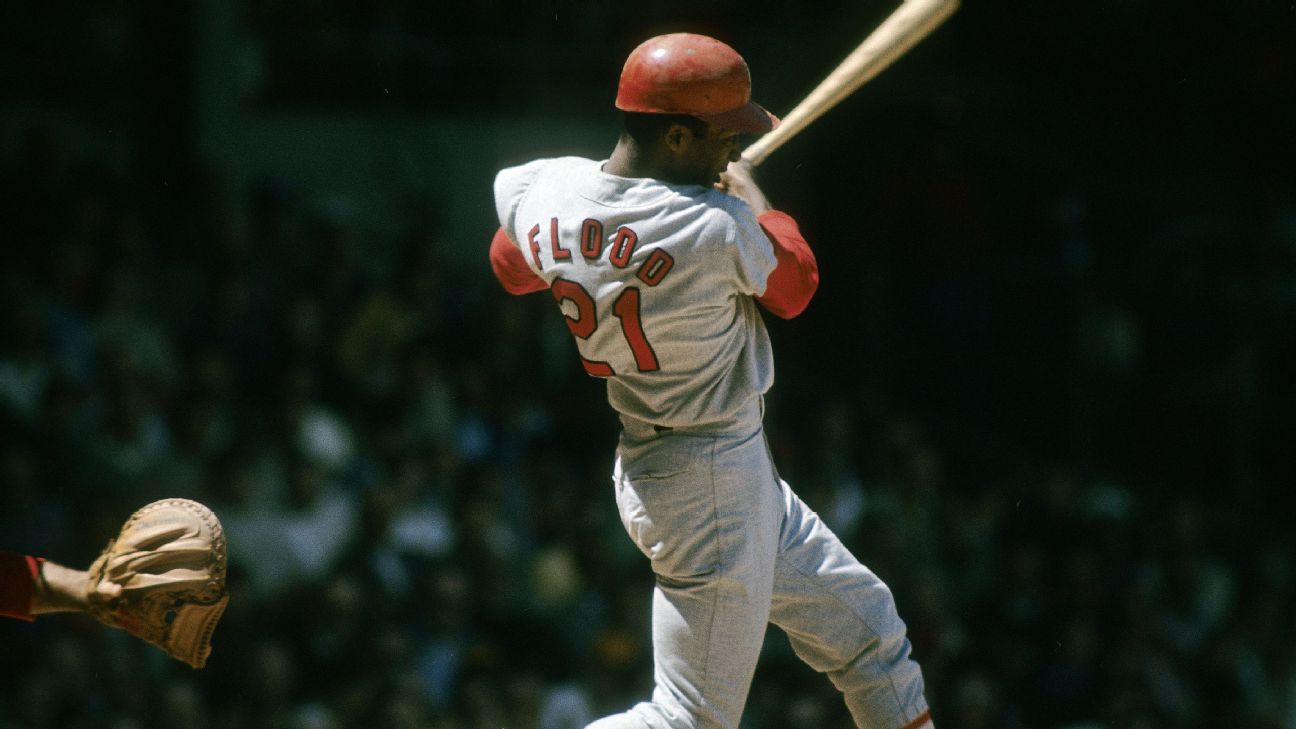 WASHINGTON -- Curt Flood's widow has a simple explanation for why her late husband, who is revered by players for sacrificing his career to advocate for free agency, has not been enshrined in baseball's Hall of Fame.

"I think the holdup is that he got on a lot of people's nerves," Judy Pace Flood said.

Flood has some powerful advocates on his side.

Members of Congress sent a letter to the Hall of Fame on Thursday asking that Flood be elected in December by the next Golden Days committee. The recognition would coincide with the 50-year anniversary of Flood's defiant letter to baseball Commissioner Bowie Kuhn in which he wrote, "I do not feel that I am a piece of property to be bought and sold irrespective of my wishes."

"What Curt Flood did and championed is resonating throughout professional sports for the past 50 years," Rep. David Trone, a Maryland Democrat who is leading the push for Flood's enshrinement, said at a news conference.

Flood was 31 when he sent that letter on Dec. 24, 1969. He had spent most of the past decade as the starting center fielder for the St. Louis Cardinals. A three-time All-Star, Flood won seven consecutive Gold Gloves and helped lead the Cardinals to three National League pennants and two World Series titles.

"What a great ballplayer," said Sen. Roy Blunt, a Missouri Republican. "When the great Stan Musial was finishing up his career in right field, Curt Flood would play all of center and about half of right so that Stan the Man could still be on the team."

After the 1969 season, Flood asked the Cardinals for a pay raise. Instead, they traded him to the Philadelphia Phillies. Under baseball's reserve clause, players were fully under the control of their teams.

Flood refused the trade and, with the backing of players' union executive director Marvin Miller, filed a federal lawsuit in January 1970 challenging the reserve clause. The Supreme Court ruled against him in a 5-3 decision in 1972, but the justices agreed Flood's arguments had merit. They said they could not intervene because it was up to Congress to alter the antitrust exemption created in 1922, when the Supreme Court ruled baseball was not interstate commerce.

The union kept fighting, and the reserve clause was struck down in December 1975 by arbitrator Peter Seitz in a case involving pitchers Andy Messersmith and Dave McNally. The following July, owners and the union agreed to a labor contract that included free agency.

"I will tell people to this day: Curt did not lose that case," Pace Flood said.

Flood's efforts essentially ended his career. He only played in 13 more games in the majors after his letter to Kuhn. With 1,861 hits, a .293 batting average and his defensive prowess, Flood could have retired with Hall of Fame-worthy numbers had he spent several more seasons as a regular player.

Flood battled alcoholism before rebuilding his life with the help of Pace Flood, an actress ("Peyton Place," "Cotton Comes to Harlem") who broke down barriers for black women in Hollywood. The couple dated in the '60s and married in 1986. Flood died of throat cancer in 1997. He was 59.

The significance of his contributions is not lost on today's players. Pitcher Gerrit Cole mentioned Flood when he signed his $324 million contract with the New York Yankees in December.

"It's so important that players know the other sacrifices that players made in order to keep the integrity of the game where it is," Cole said.

Players' unions from the NFL, NHL, NBA and MLS had representatives at Thursday's news conference, and 102 members of Congress signed the letter to the Hall of Fame. Miller was elected to the Hall last year by the modern era committee, an encouraging development for Flood's advocates. Flood's letter to Kuhn is on display in Cooperstown, too.