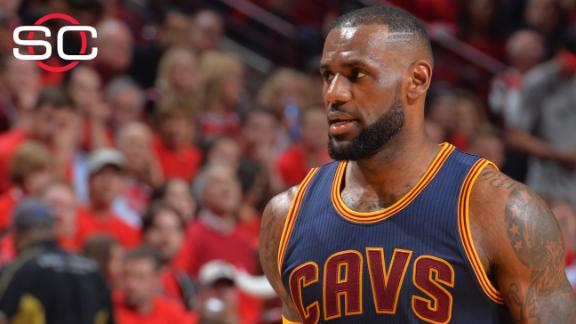 INDEPENDENCE, Ohio -- LeBron James participated in the walkthrough portion of the Cleveland Cavaliers' shootaround Tuesday prior to Game 5 of their Eastern Conference series against the Chicago Bulls, but his sore left ankle prevented him from doing much else.

"It makes no sense [to test it in the morning]," James said to reporters. He wore sandals, leaving the heavy wrap on his ankle in plain sight. "I'll give it a test tonight."

James rolled his ankle while colliding with Derrick Rose in the third quarter of the Cavs' 86-84 Game 4 win in Chicago on Sunday. He persevered through the injury and eventually hit the game-winning shot, but admitted on Monday after watching the replay of the ankle turn over and over again: "I don't know how I finished the game."

James said, though, the ankle would not stop him from playing in Game 5. "It's been better, but it's been worse," James said. "So, I'll be ready to go tonight."

The four-time MVP is one of several Cavaliers players dealing with injuries at this stage of the season. Iman Shumpert also suffered a strained left groin earlier in the Chicago series. An MRI on Monday revealed left knee tendinitis for Cavs point guard Kyrie Irving, who was already dealing with a strained right foot. Like James, Irving was limited at Tuesday's shootaround, but vowed on Monday to keep playing through his injuries.

"There's not much more you can tell him," James said of Irving. "You can give him all the guidance he wants and all the guidance he needs, but he's a big part of our puzzle. When he's on the floor we know he makes plays. Obviously we know he's been hampered a little bit, or a lot, more than he's ever been probably since he's been out with an injury at Duke, but he's going to give us what he has."

Added James: "When you're dealing with injuries, you just find other ways to help the team, and I think we both are going to do that tonight."

LeBron says he'll be ready to play in Game 5
LeBron James comments on the status of his sore ankle and getting ready for Game 5 of the Bulls-Cavaliers playoff series.