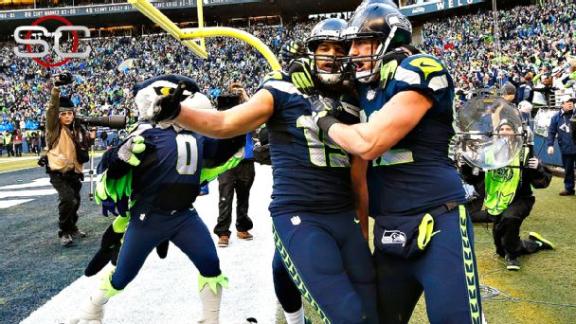 Seattle Seahawks running back Marshawn Lynch could be writing another check to the NFL.

Lynch, who scored on a 24-yard run to help the Seahawks take the lead for the first time late in the fourth quarter on Sunday against the Green Bay Packers, made an obscene gesture after he crossed the goal line.

The running back wasn't flagged for the move, but it could be deemed as unsportsmanlike conduct.

Lynch finished with 157 yards on 25 carries in the Seahawks' 28-22 come-from-behind victory over the Packers in the NFC Championship Game at CenturyLink Field.

Lynch received a fine of $11,050 for making a similar gesture as he dove into the end zone at the end of his 79-yard touchdown run against the Cardinals in late December.

Additionally, Lynch did not make himself available to the media postgame. He was fined $100,000 this season for failing to adhere to the NFL's media policy earlier this season.

Lynch's feet made news before he the game even started, as he planned to wear gold cleats for the game. He was told by the NFL that if he wore them he would be violating the league's uniform code and would not be allowed to play until he was in compliance, according to a source.

The cleats violated the league's code because they're not black, white or team colors. Every team submits to the league by July 1 its color scheme for cleats that will be worn by its players. Gold was not one of them for the Seahawks.

Lynch was wearing bright green in warm-ups and entered the game wearing shoes that matched the team's colors.