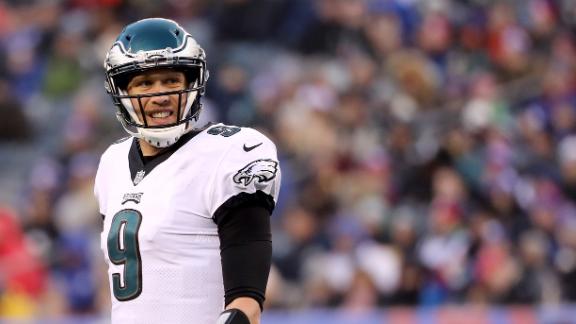 With the NFL regular season almost in the rear view mirror, Africa's players distinguished themselves in week 15 as playoff spots came into sharper focus.

Our weeklong Alvin Kamara-less nightmare ended, while other regular names continued to ensure their inclusion here.

Player of the week

Nigeria's Nelson Agholor continues to make his doubters in Philadelphia drink up the Haterade. In the Eagles' 34-29 victory over the New York Giants, "Swaghalor" caught seven passes on nine targets from replacement QB Nick Foles. The Lagosian ended up with 59 yards on his seven receptions and one timely touchdown.

The eighth touchdown of his season came in the third quarter at Metlife stadium and created some much needed separation for the Eagles from a feisty Giants team. The basketball celebration was worthy of a highlight as well. With two games left in the season, Agholor is still on pace for double digit touchdowns to close out his redemption season.

Acho had his best game of the season on Saturday against the Detroit Lions. In the Bears' 20-10 loss, Acho played his part to keep the Bears in the game as he tallied four tackles with one sack and a forced fumble.

The Nigerian has been steady in providing quarterback pressure for the Bears most of the season but on Saturday he was finally able to get his first solo sack of the season. The Nigerian-American from Texas provides leadership and professionalism to the Bears' defense and he will be relied on even more as the team's rebuild continues.

The Offensive rookie of the year frontrunner made his return to the field after exiting the concussion protocol. The Liberian sustained his concussion during the Saints' opening drive two weeks ago and didn't return to the game as the Saints lost to the Atlanta Falcons.

In the Saints' 31-19 win over the New York Jets this week, the Zoom of the 'Boom and Zoom' duo, rushed for 44 yards on 12 carries. As usual, Kamara made his presence felt with his pass catching ability out of the backfield when he caught six passes on seven targets for 45 yards and a second quarter touchdown.

This was Kamara's seventh game with a touchdown out of his last eight games (the exception being the Falcons game in which he was injured). He now has 12 combined touchdowns on the season and is one of three rookies in the top 10 list for All-Purpose yards this season. (All-Purpose is combined net yards from rushing, receiving, Interception returns, punt returns, kickoff returns and fumble returns).

The Miami Dolphins disruptive defensive tackle had another productive game albeit in a loss. In the Dolphins' 24-16 loss to the Buffalo Bills, Suh racked up seven tackles, including 3.5 tackles for a loss.

Suh and the defensive line kept Buffalo QB Tyrod Taylor on the run (which isn't necessarily a good thing against a QB that enjoys leaving the pocket) and played their part to help keep the game close.

With the disastrous loss on Sunday, the Dolphins playoff hopes are virtually over and the next two games will be important for Coach Adam Gase as he prepares for his third season at the helm. As for Suh, the Cameroonian-American is on 4.5 sacks for the season but is still projected to end up with six sacks to close out the season.

Chidobe Awuzie (Dallas Cowboys) - The Cowboys rookie corner had mixed results in his return to the Bay area to play the Oakland Raiders. Awuzie had five tackles and a pass breakup in the Cowboys' win as he continued his solid play, but he was unable to prevent Raiders receiver Michael Crabtree from scoring two touchdowns.

Patrick Onwuasor (Baltimore Ravens) - "Peanut" Onwuasor remains steady at weak side linebacker for the Ravens. Seven tackles in the win over Cleveland takes him up to 78 tackles for the season (second on the Ravens behind middle linebacker C.J. Mosley).

Tanoh Kpassagnon (Kansas City Chiefs) - The Ivorian-Ugandan rookie had his most productive game of the season with two tackles in the Chiefs' win over the Los Angeles Chargers. Playing special teams for most of the season, Kpassagnon is finally seeing more work on the defensive line.

Players to watch in Week 16

Playing at Chicago on Christmas Eve, the Cleveland Browns will have their best opportunity to get that elusive first win of the season. Njoku found himself unused in the passing game during the week 15 loss to the Ravens. That will have to change if the Browns hope to win at Chicago on Sunday.

With two quality pass catchers in the newly-returned Josh Gordon and Njoku, it'll be up to quarterback Deshone Kizer to use his receiving options properly. Njoku, as he's shown all season, will be available as a safety net for Kizer if he decides to play safe and avoid untimely interceptions.

If the Browns are to get the win on Sunday, the offense will need to step up and our man will be hungry for some passes his way after going without any targets last week.

Coming off an excellent game in the Detroit win over Tampa Bay in week 14, Ansah wasn't a major factor for the Lions in the week 15 win over Chicago. This week, the Lions go to Cincinnati to take on the reeling Bengals.

Even though he has already bettered his injury-plagued 2016 performance, Ansah is projected to end up with eight sacks on the season which would put his 2017 season up there as his second most productive season so far.

Going up against Bengals tackles Cedric Ogbuehi and Jake Fisher, Ansah will get opportunities to add to his six sacks and one forced fumble while helping the Lions home in on a wildcard spot.