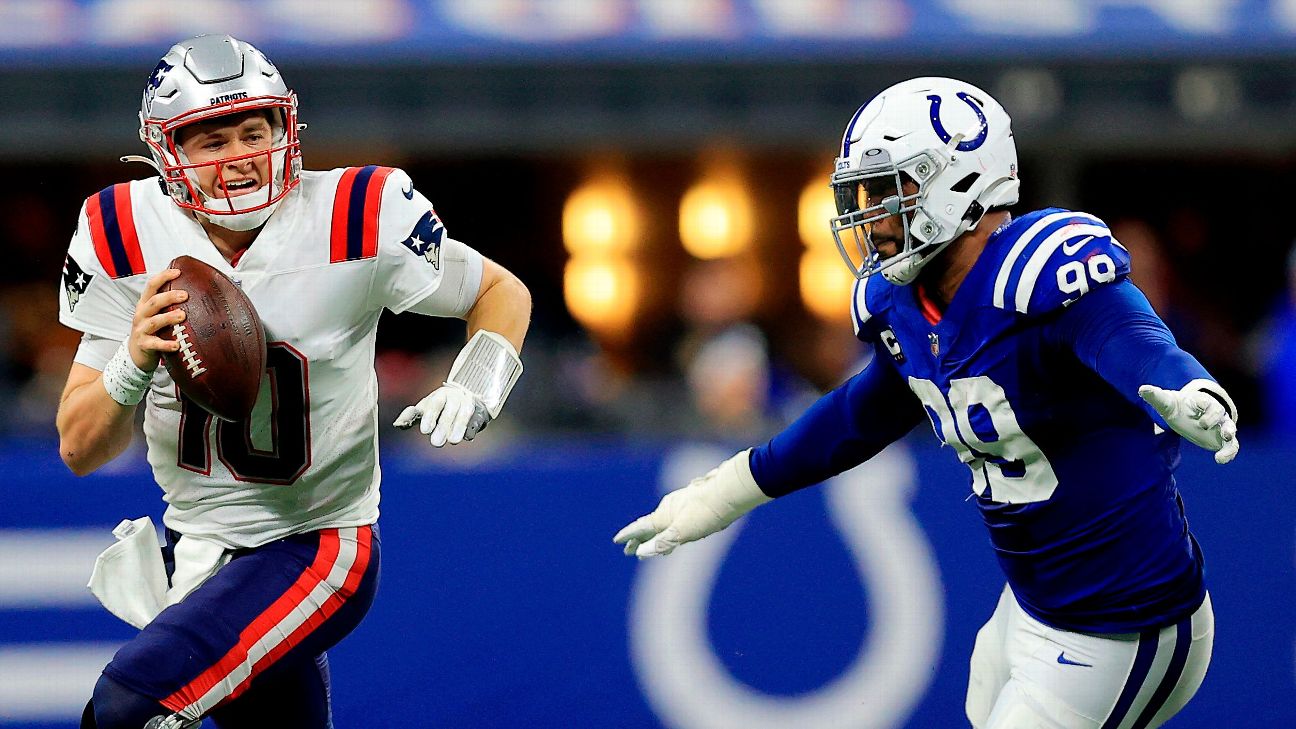 The end of the New England Patriots' seven-game winning streak tells us at least one thing about the wild AFC playoff race: We'll depart Week 15 with a different AFC leader than we began it with.
The Patriots' 27-17 loss at the Indianapolis Colts means that either the Kansas City Chiefs or Tennessee Titans will finish this week in the conference's top spot. The Chiefs are the current leaders, but the Titans can overtake them by winning Sunday at the Pittsburgh Steelers.


The Colts, meanwhile, got a huge boost to their playoff chances, and they now appear quite likely to grab at least a wild-card spot. They're also not yet eliminated from the AFC South race after having won seven of their past nine games.

What follows is a preview of our weekly snapshot of the NFL's playoff picture, incorporating ESPN's Football Power Index (FPI) and a bit of our own instincts to give you a sense of short- and long-term stakes. We've threaded playoff and/or division clinching scenarios for a handful of teams, and we'll update how it all worked out on Sunday, Monday and Tuesday.

The Chiefs remained atop the AFC on Saturday night, but they will fall to No. 2 if the Titans beat the Steelers on Sunday. But for at least one evening, the Chiefs get to enjoy the fruits of their seventh consecutive victory. If nothing else, their win over the Chargers on Thursday night eliminated the possibility of the Chargers holding a head-to-head tiebreaker in the AFC West race. That's a good thing, because it's not like the Chiefs have an easy schedule the rest of the way. They will be playing three AFC wild-card contenders, none of whom is likely to be playing out the string: Pittsburgh, Cincinnati and Denver. Regardless, this is going to be fun.

The Titans moved up one spot Saturday night because of New England's loss, and they could supplant the Chiefs atop the AFC on Sunday if they defeat the Steelers, thanks to the head-to-head tiebreaker. The Colts' win means the Titans can't clinch the AFC South or a playoff spot this this weekend, however. The best news for the Titans is that they have the NFL's easiest strength of schedule the rest of the way, according to the FPI. Their remaining games are against the Steelers, 49ers, Dolphins and Texans.

Saturday's loss snapped the Patriots' seven-game winning streak, dropped them from the top of the AFC and scuttled their scenarios for clinching a playoff spot or the AFC East this week. Now, they'll watch warily as the Bills host the Panthers on Sunday. If Buffalo bests Carolina, as the Bills are favored to do, it'll set up a fun matchup in Week 16. When the Patriots host the Bills, the winner will lead the AFC East. (Neither team would clinch in that scenario.) Had the Pats prevailed in Indianapolis, the FPI would have given them a 59.1% chance to win the top spot in the AFC; that likelihood now stands at 21.6%.

The Ravens have had two consecutive AFC North losses and have fallen from the AFC's top seed to its fourth over the past two weeks. Baltimore's remaining schedule -- against the Packers, Bengals, Rams and Steelers -- is among the league's toughest. Their lead in the AFC North is down to one game, and while the FPI is still bullish on their playoff chances, it sure doesn't feel like the Ravens are a playoff team at the moment.

The Colts pulled off a huge win Saturday night, both qualitatively and quantitatively. Obviously, it means something to end an eight-game losing streak versus the Patriots. Had it extended to nine, the Colts' playoff chances this season would have been down to 42%, according to the FPI. Instead, the win put it at 80% and even allowed the Colts to jump the Chargers in the AFC standings. Indianapolis won't be able to clinch this weekend, but after taking care of the Patriots, it appears it will be just a matter of time.

The Chargers lost the biggest game they've played in years on Thursday night, but they're back where they started the night: in a good position for a wild-card playoff berth. It would be just their second trip to the postseason in the past eight years. They had a legitimate chance to overtake the Chiefs in the AFC West, and it remains a statistical possibility, but it'll require help from a team that has developed a bunch of experience in closing out postseason position during the past few years.

In a matter of weeks, the Bills have gone from the top of the AFC East to barely clinging to a playoff spot. They're certainly not getting the outcomes you would expect for a team with designs on a deep playoff run, but only one of Buffalo's losses has been by more than one score. The Bills have only one game remaining against a team with a winning record -- the Patriots in two weeks -- and the FPI is still giving Buffalo a really good chance to hang onto one of the wild-card spots.

In the AFC hunt

The Browns managed a season split with the Ravens, eliminating a head-to-head tiebreaker with them if it were to come to that for an AFC North title. Yes, the Browns are in both the divisional and wild-card mix. They get the Raiders at home.

The Bengals' playoff chances have taken a big hit with consecutive losses to the Chargers and 49ers. They'll face another contending team (Denver) on Sunday.

The Broncos have now won four of their past six games and have a chance to jump another playoff contender when they take on the Bengals on Sunday afternoon.

The Steelers' remaining schedule is pretty brutal, with games against the Titans, Chiefs, Browns and Ravens awaiting. The only thing left now, it appears, is their inevitable elimination from playoff contention.

The Cardinals' loss to the Rams on Monday elevated the Packers to the top of the NFC, courtesy of the head-to-head tiebreaker. And the good news can continue this week. The Packers will clinch the NFC North if they beat the Ravens or if the Vikings lose to the Bears. And if the Vikings beat the Bears, the Packers can still clinch a playoff spot if the Saints and 49ers lose. The Packers have a few areas to shore up, most notably their special teams, but in a flawed league, they have as good of a chance as any team to make a deep playoff run.

The Cardinals' loss Monday night allowed the Buccaneers to move up a spot, and Week 15 brings some clinching scenarios for Tampa Bay. The Buccaneers could secure both a playoff berth and the NFC South with a win at home against the Saints. They also can clinch a playoff berth with losses by the Vikings and 49ers. It's worth noting, of course, that the Saints have won all three regular-season matchups between these two teams since Tom Brady signed with the Buccaneers last season. (The Bucs did beat the Saints in the divisional playoffs last season, though.)

Monday night's result was a disappointment but not a disaster for the Cardinals. Yes, they could have clinched a playoff spot with a win over the Rams, and that would have given Arizona a chance to secure the NFC West title as soon as this week. But all that stands between the Cardinals and a playoff spot now is a game at the hapless Lions. The loss to Los Angeles certainly threatened theCardinals' hopes for having home-field advantage in the playoffs, but it's worth noting that they are undefeated on the road this season. Even if they lose to the Lions, the Cardinals can clinch that postseason spot with losses by the Vikings and Saints, losses by the Vikings and 49ers or a Packers victory combined with losses by the Falcons and Saints.

The Cowboys have a three-game lead in the division, and their pending division title appears inevitable. To clinch a playoff berth, the Cowboys need a win over the Giants and a loss by either the Buccaneers or 49ers, or losses by the Vikings, Falcons, Saints and a clinching of the strength-of-victory tiebreaker over the Eagles.

The Rams are nowwithin one game of the NFC West lead. The Cardinals are still the heavy favorite, as the Rams have a 10.3% chance to capture the division, per the FPI, but the win increased Los Angeles' chances of making the playoffs to nearly 99%. The Rams' remaining schedule is tough and includes three opponents who are pushing for playoff spots (Vikings, Ravens and 49ers), but Monday night's effort showed they are up to the challenge.

The 49ers' overtime victory in Cincinnati in Week 14 allowed them to put a game's worth of distance between them and the five NFC teams with 6-7 records, and the FPI has their playoff odds at 77.3%. They could put away one of those teams this week if they defeat the Falcons, but it won't be easy sledding. The Niners still have games remaining at the Titans and Rams, with a presumably gimme matchup against the Texans in between.

Washington missed a chance to make the NFC East a bit more interesting in Week 14, but let's face it: The real deal for Washington is the wild card, and Sunday's loss didn't knock it out of the top seven. Now, in an NFC field that includes five 6-7 teams, the FPI is giving Washington a 22.6% chance to grab one of the wild-card spots. It'll play one of its competitors for those berths (Eagles) twice in the next three weeks.

Next up: at Eagles

In the NFC hunt

Two of Minnesota's four remaining games are against the Bears, including Monday night, so anything's possible.

The Eagles return from their bye week very much still in the playoff race, in large part because they have two games remaining against Washington.

All credit to the Falcons for staying in the race with an undermanned team in the first year of coach Arthur Smith's tenure. But games remaining against the 49ers, Bills and Saints might be too big of an obstacle.

The Saints have only one game remaining against a team with a winning record -- Sunday at the Buccaneers -- but the only team they've defeated since the start of November is the woeful Jets. 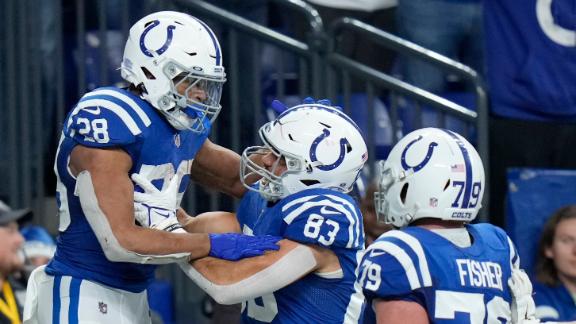 Taylor breaks away for 67-yard TD to put Colts in control late
Jonathan Taylor scores a 67-yard yard touchdown to put the Colts up by 10 just before the two-minute warning. 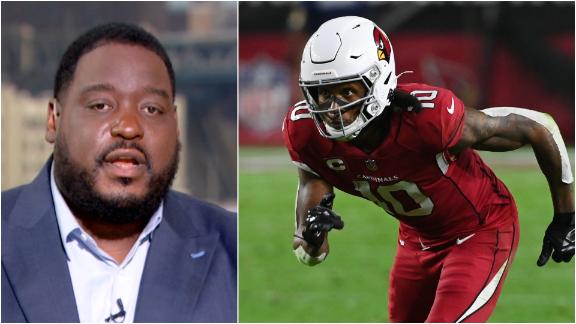