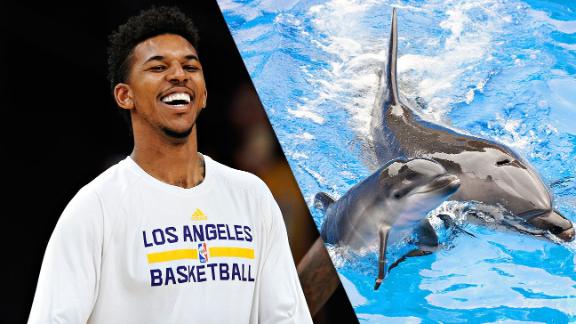 ESPN
By Baxter Holmes
LOS ANGELES -- Nick Young strolled in late to the Lakers' locker room Tuesday at Staples Center, a little more than an hour before tipoff of their 106-96 loss to the Denver Nuggets.

The Lakers' reserve guard wore a huge smile, as usual, and a black sweater with the word "ROMANTIC" stretched across the front, a timely message with Valentine's Day looming and with Young recently saying he just needs some "love" this month to get his slumping game back on track.

Young then proceeded to stand in front of his locker and, with complete seriousness, recount an instance in which, he said, a dolphin tried to kill him.

The subject was broached following a tweet Monday by his girlfriend, rapper Iggy Azalea, who proclaimed, "Nick is scared of dolphins."

Young said his near-death experience occurred in Cabo San Lucas, Mexico, although he didn't specify when.

"He was playing with everybody else, doing what dolphins do -- the 'ack ack' and all that," Young said. "It was my time to ride the dolphin. For some reason, he took me all the way to the bottom. He was trying to drown me. But I saw it happening so I jumped out of the water and took off the little life vest and threw off my little water shoes and stayed outside."

Young said the dolphin took others around in circles but didn't do the same when it was his turn to interact with it.

As Young spoke, Lakers coach Byron Scott called out to Young from across the locker room.

"What time is it?" Scott asked.

"What time is it?" Scott asked again.

Young then turned to the group of assembled reporters.

"I don't want to do nothing no more," he said, attempting to cut his media session short.

He then talked for another minute and a half.

The Lakers' coach also was asked how many times Young has been late this season.

"Uh, that I know about?" Scott asked after a long pause. "I know he's tried to sneak in a couple of times, too. That didn't work. He's been fined a few times. I don't discriminate. If you're late, you're fined. It doesn't matter who you are. My rules are pretty simple."

Scott later was asked where he thought Young's mindset was after several poor games.

The locker room event comes two weeks after Young was benched by Scott in the second half of a loss to Houston after struggling in the first half.

Following the 99-87 defeat, Young left without speaking to reporters after going scoreless for the first time for the Lakers in eight minutes of playing time -- his fewest in two seasons with Los Angeles.

Scott said after that loss he wasn't happy with Young's effort.

Nick Young Recounts Near-Death Dolphin Encounter
Nick Young reflects on the time he was attacked by a dolphin while on vacation in Cabo San Lucas, Mexico.