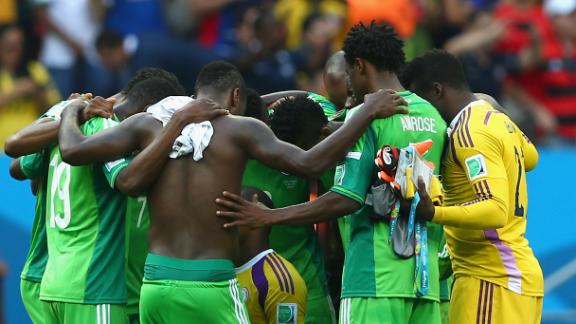 John Obi Mikel has claimed Olivier Giroud deliberately elbowed on him and criticised referee Mark Geiger for failing to show the France striker a red card.

Nigeria midfielder Mikel was caught by Giroud in the first half of his country's 2-0 defeat by France in the 2014 World Cup round of 16 on Monday. Although referee Geiger appeared to see the incident, he refused to take any action.

"Yes I got an elbow and the referee saw it and he only gave him a warning, not even a yellow card, nothing," Mikel said. "It was bad. We know the game -- if you see it, act on it.

"The ref saw it. He did catch me, I don't know if it was too hard but the intention was definitely there.

"I don't think he is a dirty player. Everyone wants to win for his country. He hasn't done those sort of things before so maybe it was just one of those things in the heat of the moment."

Nigeria were also angered by a series of challenges on midfielder Ogenyi Onazi, with one tackle from Blaise Matuidi resulting in the Nigerian being carried off after 59 minutes.

"I thought the referee didn't help us," Mikel said. "There were some heavy challenges and I think Ogenyi Onazi has broken his ankle. Challenges like this are bad but it was a 50-50, he just miscalculated, he is not a dirty player."

Nigeria head coach Stephen Keshi, who resigned after his team's World Cup exit, accused Geiger of showing bias towards France. He was particularly incensed by what he said was a failure by the American referee to protect Onazi.

"I am not happy with the officiating because Onazi, on two occasions, he had a very bad tackle and nothing was done by the referee," Keshi said. "I think the referee was just... for me, I think he was biased. This is the first time I will speak about the referee in my life as a coach but it wasn't good.

"If you look at the goal we scored, I don't think there was any infringement. The referee is a human being, bound to make some mistakes, but a lot of mistakes is questionable. I am not happy about it but he's the man who decides whatever goes on the pitch."

Nigeria captain Joseph Yobo, the former Everton defender, also retired from international football, after scoring a late own goal after Paul Pogba's header in the 2-0 defeat by France.

Nigeria gave a good fight
Although Nigeria lost 2-0 to France, ESPN FC's Claudio Reyna gives Nigeria credit as they had France on their heels for the majority of the game.

African teams knocked out of World Cup
The panel weigh in on Nigeria and Algeria's heroic performances in the Round of 16 at the World Cup.

Keshi: We can compete with anyone
Nigeria head coach Stephen Keshi says he does not know if he'll return as coach following their 2-0 loss to France.