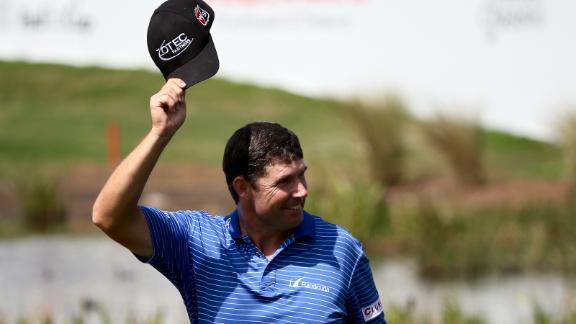 PALM BEACH GARDENS, Fla. -- Whether he was piling up majors or playing so poorly that he lost his PGA Tour card, Padraig Harrington never wavered from one goal in golf. Just get him anywhere near the lead with nine holes to play, and he would happily take his chances.

His caddie, Ronan Flood, reminded him of that Monday morning in the Honda Classic when Harrington was four shots behind at the turn.

"He said, 'Look, would you have taken this on Thursday?' And I said, 'Yes, that's what you want,' " Harrington said. "You want to be in contention with nine holes to go, because anything can happen coming down the stretch. And it did."

Not even Harrington could have written the script to his playoff victory at rain-soaked PGA National.

He ran off four straight birdies on the back nine to take the lead. He gave it back with a 5-iron into the water for double bogey on the par-3 17th. He made a 15-foot birdie putt to force a playoff. And given a shot at redemption, he hit 5-iron to 3 feet on the 17th to win on the second playoff hole when 21-year-old rookie Daniel Berger hit into the water and made double bogey.

Harrington lost his card last year and needed a sponsor's exemption to get in the Honda Classic. Now he's eligible for the Masters, The Players Championship and at least two World Golf Championships. He had fallen to No. 297 in the world. The 20th win of his career moved him to No. 82.

None of that mattered to him as he sat next to the trophy, Irish eyes smiling bright as ever.

"It's not about what it means to my career or what it means going forward," he said. "You don't win that often. When you win, make sure you enjoy it."

Harrington's birdie on the 18th was the most meaningful putt he has holed since one from the same distance for par on the 18th at Oakland Hills. It gave him an even-par 70 and the second chance he needed in a playoff over Berger, the hometown rookie who finished birdie-birdie for a 6-under 64.

They finished at 6-under 274, the survivors of a day in which five players had a share of the lead at some point, and four of them found water at the worst time.

"It's one of those golf courses where you get yourself in contention, it is a little bit uncomfortable," Harrington said. "But that's the way it is."

That's how it was for Ian Poulter.

"It's just bitterly disappointing to put myself in the position I have, to play as well as I've played ... and a couple of loose shots has cost me this tournament," Poulter said. "It's a shame to hand tournaments away. I've handed one away this week."

That's how it was for Patrick Reed.

He matched birdies with Harrington on the 14th hole and they were tied at 7 under when Reed hit his tee shot into the water and made double bogey. He bogeyed the next two holes, shot 73 and finished three shots behind.

"I had three holes that kind of bit me," he said.

And ultimately, that's how it was for Berger. He had a 15-foot birdie putt to win on the 18th in a playoff and narrowly missed. Then, he watched Harrington hit 5-iron to within 3 feet on the 17th on the next playoff hole.

"He's a great player, and that shot on 17 was kind of a dagger in the heart," Berger said.

Paul Casey, who lost in a playoff at Riviera last week, was tied for the lead until a bogey on the 14th hole. He never caught up, missing a 20-foot birdie putt on the 18th that would have got him into another playoff. He closed with a 68.

Casey tied for third with Russell Knox (68) and moved to No. 45, getting him into the World Golf Championship at Doral.

Phil Mickelson was four shots behind when the final round resumed Monday morning. He missed a 10-foot par putt at No. 9, didn't make a birdie and shot 73 to tie for 17th.

Harrington was five shots behind when he pulled his tee shot at No. 11, so far left it was on a muddied patch of grass that had been trampled by the gallery. He hit 4-iron at the right flag, over the water, to 15 feet for a birdie and a three-shot swing when Poulter hit into the water for double bogey.

That was the start of four straight birdies. That one shot might explain one of the more complex minds in golf. In the lead with a good lie, he sees trouble. From behind and in trouble, he only sees opportunity.

"I'm not going to win the tournament unless I take it on," he said.

With a one-shot lead on the 17th hole in regulation, he tried not to make a mistake and hit in the water. In a playoff on the 17th, he fired at the flag.

"Believe it or not," he said with a smile, "when I get in contention I can still hit the shots."

Berger Comes Up Short In Honda Playoff
PGA Tour rookie Daniel Berger talks to ESPN.com's Michael Collins about the surreal experience of losing the Honda Classic in a playoff.

Poulter: I Should Have Finished This Off
Ian Poulter, after making two double-bogeys and a triple-bogey in the final round, talked about coming up short at the Honda Classic.
Related topics:
sportsespnphil mickelsonrussell knoxpaul caseypatrick reedpadraig harringtonhonda classicgolfian poulterdaniel berger
Copyright © 2020 ESPN Internet Ventures. All rights reserved.
More Videos
From CNN Newsource affiliates
TOP STORIES