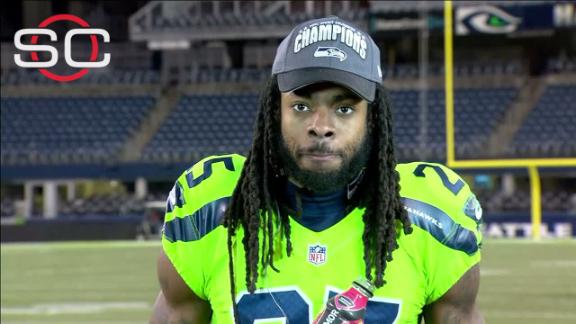 Pete Carroll said he and Richard Sherman met for an hour Friday morning to discuss the cornerback's sideline outburst during the Seattle Seahawks' 24-3 win over the Los Angeles Rams.

Sherman engaged in a shouting match with Carroll and offensive coordinator Darrell Bevell after they called a pass play from the Rams' 1-yard line. He had to be calmed down by teammates.

"I just spent an hour with him, and we've been through it," Carroll said on 710 ESPN Seattle's Brock and Salk show. "I love Richard. I just flat-out love the dude, and I've been with him through so much and watched him grow and do so many unbelievable things. We made it through it. He knows that wasn't right. He's just so fiery, and we've seen him before. He'll speak for himself on that. But I feel very good about where he is right now. We're going to be all right.

"It was too bad. It was a distraction to the game. And that's not the way it's supposed to go."

Carroll was asked later in the day if he viewed Sherman's actions as insubordination.

After Thursday's game, Sherman referenced the Seahawks' Super Bowl XLIX loss to the New England Patriotsin 2015 when Russell Wilson was intercepted on a pass from the 1-yard line.

"I'm upset about us throwing from the 1," Sherman said. "I'd rather do what most teams would do, making a conscientious decision to run the ball.

"I was letting [Carroll] know. We've already seen how that goes."

Carroll said the Super Bowl loss is still on the mind of many coaches and players.

"I've made the choice to leave some things on the shelf that I'm going to run into every once in a while. And it's going to remind me of what I believe in and what I stand for and what's important to me, and I know that Sherm feels the same way. And a number of our guys do. But no, it's not fresh. It's not something we talked about. But that just stirred up something, and it caught Sherm wrong and he went off."

Carroll says meeting with Sherman went very well
Seahawks coach Pete Carroll speaks to the media regarding the meeting he had Richard Sherman a day after Sherman's outburst on the sidelines, criticizing the decision to call a pass play on the 1-yard line.

Sherman, Seahawks happy to get back on winning track
Richard Sherman joins SVP to explain why it was important for the Seahawks to pick up a victory and the team's lack of consistency this season.