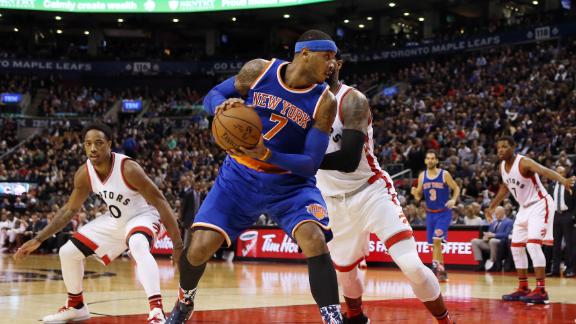 A referee admitted to missing a crucial call late in the fourth quarter of the New York Knicks' 111-109 win over theToronto Raptors. The call mighthave had a direct impact on the outcome of the game.

Crew chief Ed Malloy said the officials should have whistled Carmelo Anthony out of bounds with about 20 seconds left and the Knicks leading 106-105.

"When we came in, we reviewed the play," Malloy said. "We did see Anthony step out of bounds and should've awarded the ball to Toronto."

Anthony had the ball in his hands near the sideline and was surrounded by three Raptors. Instead of being whistled for stepping out of bounds, he was able to pass the ball to Lance Thomas, who was subsequently fouled by Toronto.

Thomas made both free throws to give the Knicks a three-point lead with 17 seconds to play.

While Raptors coach Dwane Casey said he saw the Knicks star step out of bounds with his own eyes, Toronto forward DeMar DeRozan, who scored a season-high 29 points in the loss, said the Raptors still should have pulled off a victory.

Information from ESPN staff writer Ian Begley and The Associated Press was used in this report.