Rex Ryan on Patriots: 'If Belichick's playing QB, we're coming after him' 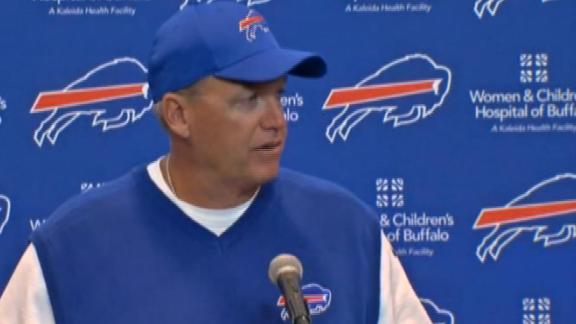 ORCHARD PARK, N.Y. -- It's not yet known who will start at quarterback for the New England Patriots when they host the Buffalo Bills next Sunday at Gillette Stadium, but Rex Ryan isn't ruling out any possibilities.

A confident Ryan delivered the message after the Bills' 33-18 win over the Arizona Cardinals improved Buffalo's record to 1-2.

The Patriots have not yet announced who will start at quarterback after injuries to Jimmy Garoppolo (shoulder) and Jacoby Brissett (thumb). New England, which defeated the Houston Texans 27-0 on Thursday to improve to 3-0, does not have any other quarterbacks on its roster as it continues to ride out Tom Brady's four-game suspension.

In complimenting the success of Bills quarterback Tyrod Taylor as a runner in Sunday's win over Arizona, Ryan compared him to one of the Patriots' emergency options at quarterback, receiver Julian Edelman.

"I know how difficult it is to defend against a running quarterback," Ryan said. "That's what we have to be ready [for] in case Edelman quarterbacks, right? I have a funny feeling he isn't going to be Brady back there."