Richard Sherman sorry for lashing out at reporter, but stands by outburst directed at offense 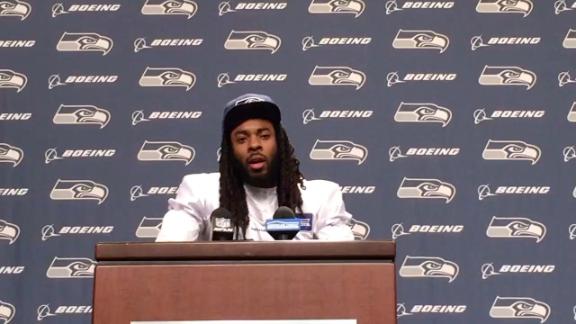 RENTON, Wash. -- Seattle Seahawks cornerback Richard Sherman said Tuesday that he had no regrets after an outburst directed at coaches during last Thursday night's game against the Los Angeles Rams.

But he grew annoyed with questions about the incident and told a local reporter that he'd ruin his career. Sherman later apologized.

During the news conference, Jim Moore of 710 ESPN Seattle asked Sherman if he thought he had a better handle on calling plays than offensive coordinator Darrell Bevell; Sherman's sideline tirade during Thursday night's game centered on Bevell's decision to pass instead of run from the Rams' 1-yard line.

Afterward, as he was walking back to the locker room, Sherman said to Moore, "You don't want to go there. You do not. I'll ruin your career."

Moore asked him how he'd do that.

"I'll make sure you don't get your media pass anymore," Sherman said.

Later, he took to Twitter to apologize for his comments.

"I thought it was nice that he did that, although I couldn't read it myself because he's already had me blocked on Twitter," Moore told ESPN 710's Freddie & Fitz, laughing.

While Moore said he doesn't need a further apology, he said he still felt the interaction rubbed him the wrong way.

"The part that bothered me the most is feeling that he's so high and mighty and powerful that he can do whatever he wants, and that includes telling the offensive coordinator what plays to run and it also includes telling me or a reporter that he can have a credential removed," Moore said. "And so it's just kind of a feeling as holier than thou that it came across as."

Sherman might not have felt holier than thou on Thursday night, but he did yell at Bevell and head coach Pete Carroll after the Seahawks decided to pass the ball from the Rams' 1-yard line. Sherman had to be calmed down by teammates.

Carroll and Sherman met for an hour to clear the air last Friday.

Carroll indicated on Friday that he had considered disciplinary action before meeting with Sherman.

"I was going to make my decision on how to move forward based on what happened and how we communicated," Carroll said. "And I feel very good about it."

Sherman said he might react similarly if the same situation were to play out in the future.

During the news conference, Sherman was asked how he'd react to an offensive player going after defensive coordinator Kris Richard on the sideline.

"If we had done something like a zero blitz in the Super Bowl and got bombed for a touchdown to lose the game, then I'm sure [it would] be understandable there, the reason," he said.

Sherman said he and Bevell are in a good place and talked about the situation last week. He described the meeting with Carroll as productive.

When asked if he thinks it's ever the place of a defensive player to question a play call, Bevell said, "No, I don't.

"He's still going to have his opinion. Everybody's going to have their own opinion. You could sit there and try to convince him and show this, show that, but it's not going to serve a good purpose. So we got to a good place."

Carroll and Bevell have admitted that the loss in Super Bowl XLIX is still a factor with the current group of Seahawks.

"I think that'll linger for a lot of people for a long time," Sherman said.