Rory McIlroy: Not my best moment 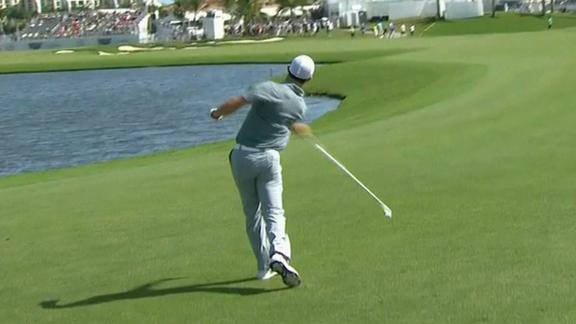 DORAL, Fla. -- A frustrated Rory McIlroy heaved a golf club into the water in anger Friday, playing the rest of the second round of the WGC-Cadillac Championship without his 3-iron, then spending several interviews afterward explaining actions that will be replayed extensively.

McIlroy didn't apologize, but admitted it wasn't "one of my proudest moments" after a 2-under-par 70 at Trump National Doral's Blue course left him at 1-under overall, eight strokes back of tournament leader J.B. Holmes.

"Felt good at the time," said McIlroy, who had just pull-hooked his approach shot to the par-5 eighth hole into the water after hitting a 302-yard drive to put himself in position.

"I don't feel good about it now. It's frustrating when you feel your game is close and you keep hitting shots like that in the water, things I rarely do."

McIlroy, 25 and the No. 1-ranked player in the world, was in excellent form before returning to the United States last week for the Honda Classic, where he missed the cut. He had finished second at the European Tour event in Abu Dhabi, United Arab Emirates, then won the Dubai Desert Classic -- his fourth victory in 12 starts going back to the Open Championship in July.

But he's been shaky in his first two PGA Tour starts, although Friday's round was his first in four under par. He made six birdies but four bogeys, including the one at the eighth hole, where he had 226 yards for his second shot -- and then launched his 3-iron some 40 yards into the water.

For all the drama, he is tied for 11th through 36 holes of the first World Golf Championship event of the year.

"I was the first one to make a comment, yes," said Henrik Stenson, who played with McIlroy, and is known to have a bit of a temper at times. "Takes one to know one, you know?"

Added McIlroy: "He said, 'Well, if you can't get on "SportsCenter" with your play, at least you can do it with something else.' He was quite funny. He's been prone to doing a thing or two like that in the past, as well, so he can relate."

McIlroy said he's never thrown a club like that, "never went at it that hard."

"I just let frustration get the better of me," he said. "It was heat of the moment, and if it had been any other club, I probably wouldn't have, but I didn't need a 3-iron for the rest of the round, so I thought why not."

Asked if he really thought about it, Mclroy said: "Yeah, there was a split second like should I or shouldn't I. But looking back, it wasn't one of my proudest moments. I walked away with a bogey and did OK from then."

McIlroy played the remaining 10 holes in 2 under.

Although the PGA Tour never announces discipline, McIlroy undoubtedly will be fined for his misadventure. He was unable to replace the club during the round.

"I usually don't play with a 3-iron," he said. "That's the thing. I usually go 4-iron, 5-wood and carry four wedges. I can either put an extra wedge in the bag (for the weekend) or I think there is a 3-iron on the way."

McIlroy Slings Club Into Water
Rory McIlroy mishit a ball at the WGC-Cadillac Championship and took his frustration out on his club, throwing it into a pond.

Why McIlroy Tossed His 3-Iron Into A Pond
World No. 1 Rory McIlroy explains why his 3-iron is sitting at the bottom of a pond on the 8th hole at the WGC-Cadillac Championship.