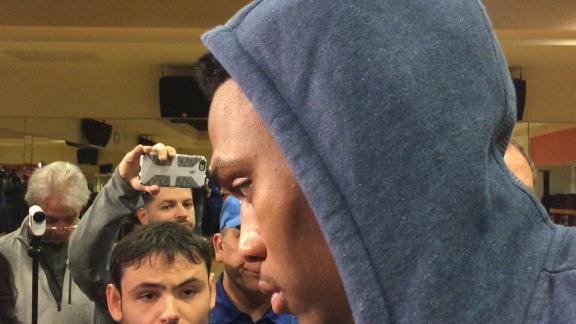 SAN FRANCISCO -- Following the Oklahoma City Thunder's shootaround Monday morning, Russell Westbrook was asked how guarding Stephen Curry is different from guarding other point guards he matches up with.

"He's a shooter," Westbrook said before Monday night's Western Conference finals opener against the Golden State Warriors. "He's not nothing I haven't seen. Him, [Damian] Lillard, guys like that, can shoot the basketball from four or five feet behind the 3, you've got to do a little different job. But just be physical."

Curry has won consecutive MVP awards and was named the first unanimous MVP in NBA history this season. He broke his own 3-point record again this season by making 402 total shots from 3.

Westbrook was also asked what he saw from the MVP's historic season.

"Making shots," Westbrook said. "He does a good job of making shots, creating shots for himself. He's a tough shot-maker."

Westbrook, who had the primary assignment of guarding Curry, finished fourth in the MVP voting and registered 18 triple-doubles in the regular season, the most since Magic Johnson in 1981-82.

It was the Oklahoma City point guard who came out on top Monday, as the Thunder notched a 108-102 win to go up 1-0 in the best-of-seven series.

Westbrook fueled Oklahoma City's victory by scoring 25 of his game-high 27 points in the second half and adding 12 assists, six rebounds and seven steals. Curry had his highlight reel moments -- including a buzzer-beating 3-pointer to close out the first half -- and finished with 26 points, 10 rebounds, seven assists and three steals, but he also had a game-high seven turnovers.