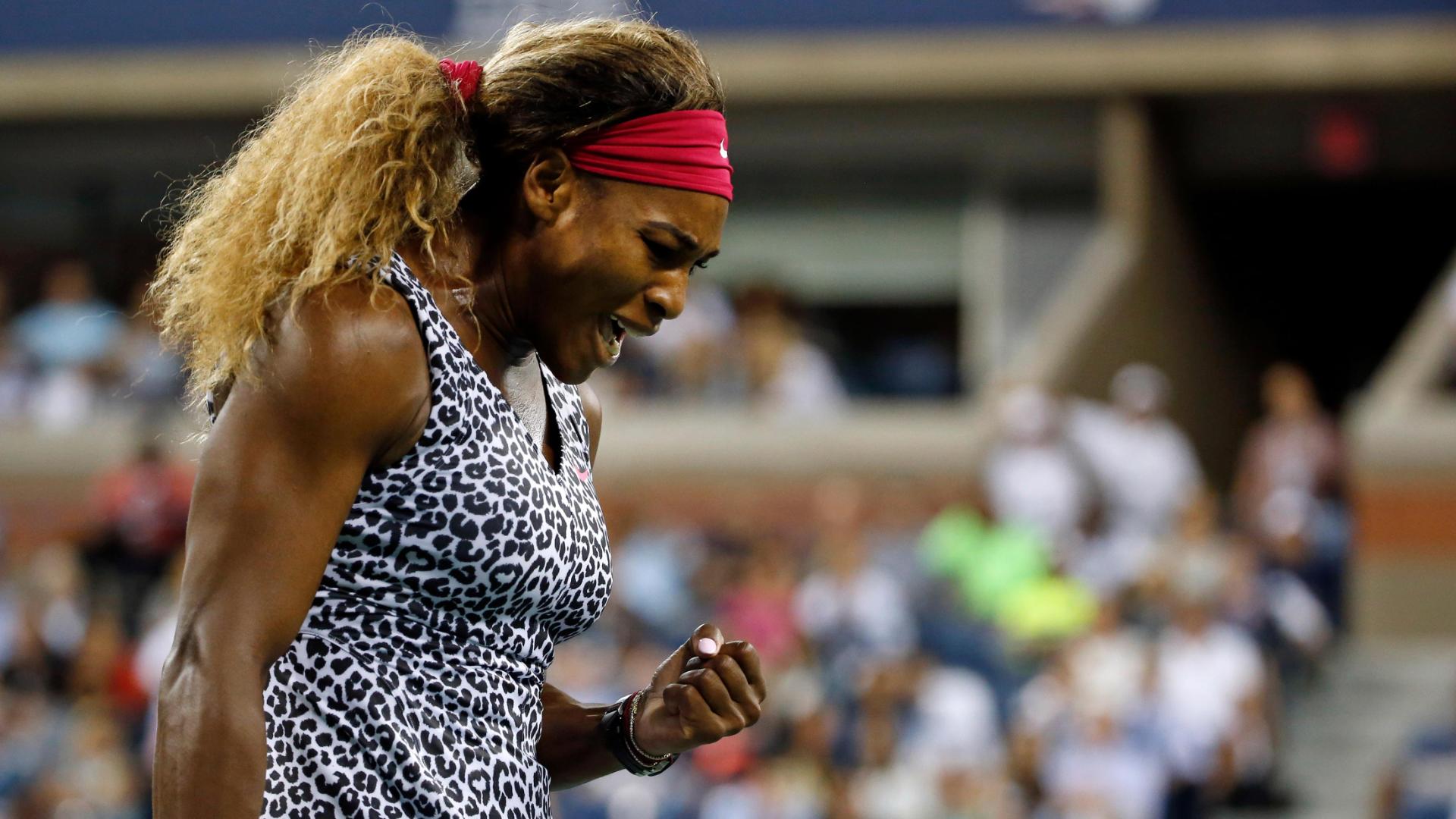 NEW YORK -- After a rough-for-her Grand Slam season, Serena Williams came into the US Open with a new approach.

Unable to make it past the fourth round at any of the first three major tournaments in 2014, Williams began her bid for a third consecutive US Open title with a 6-3, 6-1 victory over American teen Taylor Townsend on Tuesday night.

Afterward, Williams was asked whether she changed anything about her preparation for this tournament, which she has won five times overall.

"I've decided I'm not going to overthink it. I think I've overthought every Grand Slam so far this year. It didn't really work out great for me," Williams said. "So worst-case scenario, I'm just going to stay positive and do the best I can. That's all I can do."

The No. 1-ranked and No. 1-seeded Williams' best was pretty good in the all-American matchup against Townsend, an 18-year-old who is ranked 103rd and was given a wild card into the draw. Williams made only eight unforced errors and needed only 55 minutes to wrap up the victory.

She'll face another American, Vania King, in the second round at Flushing Meadows.

Townsend acknowledged afterward that she was a tad overwhelmed by the occasion. Not only was this her US Open debut, but she was facing a 17-time major champion under the lights in Arthur Ashe Stadium, the largest arena in Grand Slam tennis.

"It was just a lot of different emotions and feelings that were coming. It was hard to deal with," Townsend said.

Townsend referred to her 32-year-old opponent as one of her "tennis idols."

"She's an African-American woman from Compton, California, who has won 17 or 16 Grand Slam titles. Like, who would have thought? Anything is possible. She's paved the way for me and not only African-American girls but girls in general, people in general," Townsend said. "Just has changed the game of tennis. I think I've just learned, like, from her story that anything is possible."

Earlier, American teen CiCi Bellis became the youngest player to win a US Open match since 1996 -- almost three years before she was born -- when she stunned Australian Open runner-up Dominika Cibulkova.

"We have such an amazing future," Williams said about U.S. women's tennis. "We have so much to look forward to."

The 15-year-old Bellis rallied from down a break in the third set for a 6-1, 4-6, 6-4 first-round victory over the 12th-seeded Cibulkova. With an overflow crowd at a cozy side court roaring, she broke Cibulkova's serve to clinch the match.

"I never thought I'd come out like this," she said in an on-court interview.

"Believing was the No. 1 thing that I had to do today," said Bellis, whose nickname CiCi is derived from the initials of her first and middle names, Catherine Cartan. "That's what my coach told me before the match also: Just go out there and believe that you can win."

But on Tuesday, there she was in front of a supportive, overflowing crowd on Court 6 at Flushing Meadows, taking it to Cibulkova, the runner-up at the Australian Open in January.

"I went into the match thinking it was going to be such a great experience," said Bellis, whose rapid-fire sentences tend to finish with a gurgle of laughter, "but I never thought I would come out on top winning."

Neither did her parents. Her mother, Lori, didn't attend the match because she gets too nervous watching in person, her father Gordon Bellis said. So Lori stayed at their hotel, getting updates via text from Gordon.

"She asked how bad it was going in the first set. And so I told her [CiCi] actually won the first set. She couldn't believe that," Gordon said. "We were just thankful that she didn't get double-bageled. That was the first objective."

After trailing 3-1 in the third set -- "kind of a bummer," Bellis would say later -- she came back to even things, then broke the 25-year-old Cibulkova in the final game. When it ended, Bellis crouched at the baseline and pumped her fists, then ran over to the stands for congratulatory hugs.

"I didn't expect her to play so aggressive today. I thought she's kind of a player who's just putting the ball back and running around," Cibulkova said. "That didn't happen today. She was really aggressive on the court and that maybe surprised me in the first set."

Not since Anna Kournikova was 15 in 1996 had someone so young won a match at the US Open. And not since Mary Joe Fernandez was that age in 1986 had an American done it.

"Now it's time for her to refocus, not get too excited about this first round. Just get back to business," said Fernandez, an ESPN analyst.

Bellis' title at the USTA Girls' 18s National Championship earned her a wild card into her first tour-level main draw. The Californian was the youngest champion of that event since Lindsay Davenport also won it at 15 in 1991.

By still being an amateur, Bellis is ineligible to collect the at least $60,420 her victory is worth in US Open prize money.

Wimbledon champ Petra Kvitova fared far better than the last time she came to New York after winning at the All England Club. In 2011, she lost in the first round; on Tuesday, she beat Kristina Mladenovic 6-1, 6-0.

The player Kvitova defeated in the Wimbledon final, Eugenie Bouchard, was back to her winning ways in her return to the Grand Slam stage.

The seventh-seeded Bouchard routed Olga Govortsova 6-2, 6-1. The last time she played at a major tournament, the 20-year-old made history: the first Canadian to reach a Grand Slam final.

In the Wimbledon title match, though, she was swept away by Kvitova 6-3, 6-0, and things didn't go much better in her three hard-court tuneups for the US Open. Bouchard won just one of her four matches, including an upset loss in her opener in her home tournament in Montreal.

But against the 117th-ranked Govortsova, she had little trouble. Govortsova, who has been ranked as high as 35th, had won just two main draw WTA matches this year.

Victoria Azarenka, however, had to rally from a set down to beat 90th-ranked Misaki Doi 6-7 (3), 6-4, 6-1 on Tuesday. The US Open runner-up to Williams the last two years, Azarenka is seeded 16th after a season disrupted by injuries.

She missed the French Open and most of the spring because of a left foot injury. Azarenka then pulled out of the hard-court tuneup in Cincinnati earlier this month, where she was defending champion, to rest a right knee injury.

"Coming back from not playing in general is always tough because you need to get that momentum," Azarenka said. "I've been working hard on my body; I feel like I'm improving in every aspect. Sometimes it's challenging to get the rhythm because your physical ability raises up and your tennis has to catch up. So during the tournament it's sometimes a battle to do that."

Ana Ivanovic was feeling good about her game coming into the US Open, and it showed Tuesday. The eighth-seeded Serb beat American Alison Riske 6-3, 6-0. Ivanovic has won 48 matches this year, more than anyone else on tour.

The 2008 French Open champion has struggled to get back to that level but finally seems to be inching closer. She returned to the top 10 this month for the first time in more than five years.

The 24-year-old Riske made a breakthrough at last year's US Open, reaching the fourth round after an upset of Kvitova. She reached a career-high ranking of No. 40 this summer.

Svetlana Kuznetsova lost her first-round US Open match for the first time since 2005, the year she was the tournament's defending champion. Kuznetsova, seeded 20th this time, was beaten 3-6, 6-2, 7-6 (3) by 82nd-ranked Marina Erakovic of New Zealand.

Information from ESPN.com's Darren Rovell and The Associated Press was used in this report. 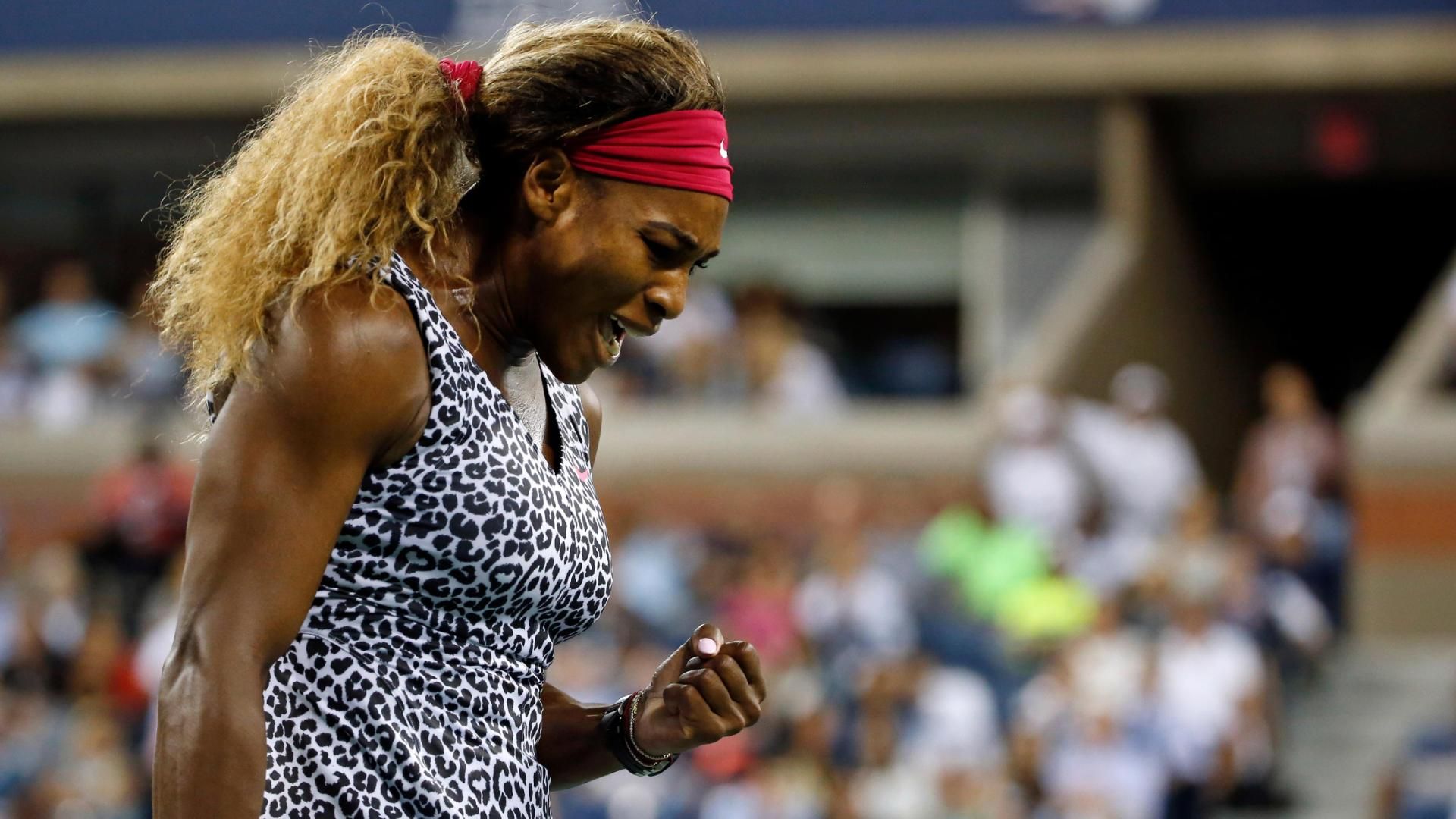 Serena Rolls
Serena Williams talks about her first-round win over Taylor Townsend at the US Open.

Bellis Upsets Cibulkova
15-Year old Cici Bellis beat Dominika Cibulkova 6-1, 4-6, 6-4 to advance to the second round at the US Open.

espnW's Star Of The Day: US Open Day 2
Jane McManus explains why Cici Bellis is your espnW star of the day.

Bouchard Cruises Into Second Round
Eugenie Bouchard beat Olga Govortsova 6-2, 6-1 in the first round at the US Open.

Bouchard Into Second Round
Eugenie Bouchard talks about her first-round win over Olga Govortsova and the expectations that come after such a successful season.