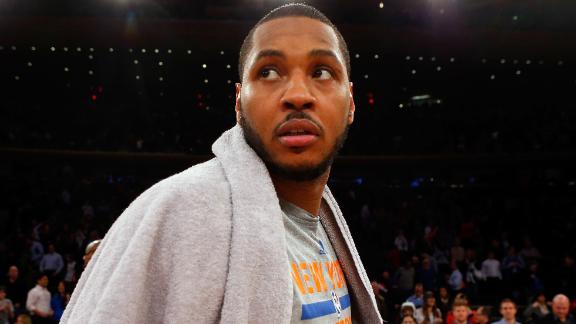 A number of rival teams increasingly believe that New York Knicks star Carmelo Anthony plans to hold off on announcing any decision about his future until LeBron James reveals where he'll be playing next season, according to sources close to the process.

Sources told ESPN.com that Anthony, whose decision was widely expected before a resolution to James' situation when free agency began, has kept the Knicks, Los Angeles Lakers and other suitors waiting at least in part to see where James goes and whether there would be any option to join his close friend.

Sources say that the Knicks thought they'd know by Monday if Anthony was prepared to commit to new team president Phil Jackson for the long term or sign with the Lakers instead. The Knicks can offer Anthony a five-year maximum deal valued at $129 million, with the Lakers' max offer topping out at $96 million over four years.

The Lakers' pitch to Anthony included a conversation with Hall of Famer Magic Johnson, according to ESPN. Johnson called from his European vacation because, as one source put it, "He will always be a Laker. If he was in town, he'd have been in the meeting."

Los Angeles is determined to wait on James and Anthony before moving on in its pursuit of other free agents. James and Anthony are the Lakers' main targets, but with each passing day, the franchise gets antsy about potentially missing on other free-agent targets such as Pau Gasol and Trevor Ariza.

Anthony has gone as silent as James with free agency now more than a week old, sparking the belief that he's waiting to see if there is a viable opportunity for the two stars to team up.

"He wants to see what LeBron does," one source with knowledge of Anthony's thinking told ESPN. "But he can't wait forever."

The Knicks have tried to maintain their long-held confidence that Anthony will stay in New York, sources said, but the delay has definitely frayed some nerves, with no indication as of Wednesday morning when either Anthony or James plan to make their decisions known.

Anthony held meetings last week with Chicago, Houston, Dallas and the Lakers before granting last word to the Knicks on his interview tour. But there's been a strong belief over the past few days that the 30-year-old is likely to choose between New York and Los Angeles, both cities in which his family is very comfortable.

Anthony's hope of going where James goes, meanwhile, would appear to depend on Chris Bosh's pending decision.

If Bosh was to decide to leave the Heat for Houston, Miami could try to sign Anthony to replace him, though the salary-cap gymnastics involved to make room for Anthony in addition to the free agents they've already committed to -- Josh McRoberts and Danny Granger -- would not be easy for the Heat.

Since opting out of the final two years of his deal (worth $42 million) with the Heat, Bosh has also been waiting to see what James decides before making his choice, having stated numerous times this season that he wants to stay with the Heat alongside one of the game's best players.

A conversation with James about his future in Miami this past weekend created enough doubt for Bosh to begin considering his other options, including Houston's offer, with James believed to be strongly considering a return to his home-state Cleveland Cavaliers, according to Broussard.

ESPN reported during the NBA Finals that the Heat have internally discussed the possibility of trying to acquire Anthony to form a "Big Four" in Miami, but they've since conceded that the pay cuts such a move would require make it impossible. Even if Bosh leaves the Heat, Anthony would still have to take a significant pay cut to join forces with James.

Sources say other teams, such as the Lakers, Cleveland and Phoenix, have explored the feasibility of creating sufficient salary-cap space to try to sign James and Anthony together, but none have yet been successful.

The Bulls are believed to be the only other team at this stage that could tempt Anthony beyond the Knicks or Lakers, but Chicago would need to strike a sign-and-trade deal with New York to be able to present him with an annual salary comparable to the Knicks' and Lakers' offers.