Steph Curry not worried about MVP, as long as a Warrior wins 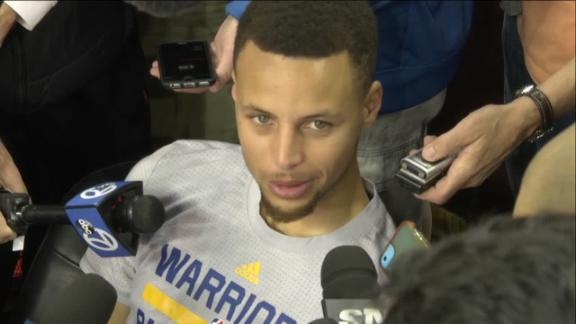 CLEVELAND -- If Golden State Warriors star Stephen Curry doesn't win his first Finals MVP award this season, that's fine with him -- as long as it's someone from his team.

"That's obviously a highly touted award," Curry said, "deservedly so, when a guy steps up in the biggest moments. But as long as it's somebody from our team, means we won.

The Warriors are up 2-0 in the Finals over the Cleveland Cavaliers, with Game 3 Wednesday at 9 p.m. ET. Golden State has won the first two games by margins of 15 points and 33 points.

Despite the dominant wins, Curry has come short of his season averages in this series, averaging 14.5 points and five assists. He is also averaging seven rebounds.

Curry's All-Star teammateDraymond Greenis the current favorite to win the Finals MVP, averaging 22 points, six assists and nine rebounds this series. He told The Vertical, "If anything, these two games show we're so damn deep. Our team is the MVP, if it's possible."

Last year's Finals MVP was given to Andre Iguodala. Despite averaging 26 points in the 2015 Finals, Curry received no votes for the award. LeBron James, despite playing on the losing team, received three votes for Finals MVP.