Team from Pennsylvania beats Texas, reaches US final at LLWS 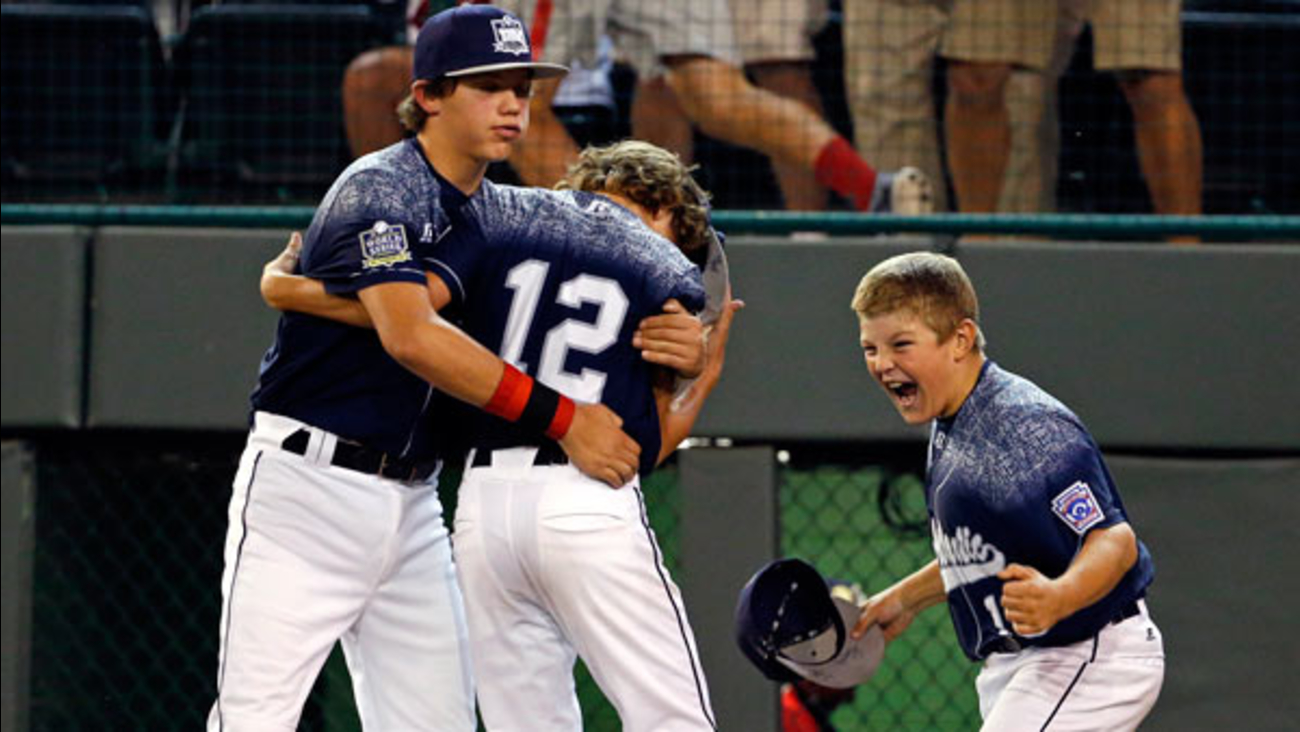 Lewisberry, Pa.'s Jaden Henline (12) celebrates with teammates Cole Wagner, left, and Dylan Rodenhaber after getting the last out of a 3-0 win over Pearland, Texas. (AP Photo/Gene J. Puskar)

SOUTH WILLIAMSPORT, Pa. -- The closest thing to a home team at the Little League World Series is headed for the final of the U.S. bracket. And Lewisberry can expect a full house when it goes for the title.

Cramer threw 87 pitchers, allowed three hits and got only two outs other than by strikeout - a fly ball and a comeback grounder. Jaden Henline moved over from shortstop and got three more strikeouts in the sixth, escaping a bases-loaded threat.

Cole Wagner hit a solo homer, and Henline had an RBI single among his three hits.

Pearland will play Bonita, California, on Thursday for a spot in the U.S. title game against Lewisberry. The winner of that game Saturday will face the International bracket winner for the World Series title a day later.

Thousands of fans made the two-hour drive from Lewisberry for the game. The crowd estimated at 35,000 packed Lamade Stadium, leaving no room to cardboard slide down the steep, grassy slope beyond the outfield wall.

The dominant performance followed the most exciting games of the tournament, featuring two big comebacks and one pulsating win that sent the undefeated team from Tokyo to the title game of the International bracket.

"A tough game," manager Junji Hidaka said, in a tone of voice that didn't need translating. "The players were great."

For Barquisimeto, it was as tough as could be. Twice the Venezuelans had a chance to finish them off and couldn't do it. And they had to go deep into their pitching to get through the loss, leaving them in a tough spot for their win-or-else game.

Barquisimeto will play Mexicali Baja California, Mexico, on Thursday. The winner gets a rematch with Tokyo on Saturday - the Japanese team also beat Mexico 3-1 in the tournament - for the International title.

"I'll talk to the coaches and see who pitches tomorrow's game," manager Domingo A. Carrasquel said. "We have enough pitching for the remaining series."

Pitcher Yeiner Fernandez was dominant, allowing only four hits through five innings. He took a 2-1 lead into the sixth and gave up a pair of infield singles with one out. He swapped spots with shortstop Johan Garcia, who got a strikeout and went to an 0-2 count on Shingo Tomita.

One strike away from finishing it off.

Tomita took a couple of pitches in the dirt, fouled one off, then singled to center to tie it. Another runner tried to score on the play but was tagged out. The Tokyo players felt fortunate to get that chance to pull even.

"Their (starting) pitcher was the best I've ever seen," Tomita said.

Two innings later, Barquisimeto hit back-to-back homers for a 4-2 lead. Jeferson Quero hit an opposite-field shot, stomped on the plate with both feet, made the sign of the cross and pointed to the sky to celebrate his tiebreaking hit. Fernandez followed with a homer, and Barquisimeto was feeling good.

The good feeling lasted only one out.

Tokoyo piled up a pair of doubles, a single, an intentional walk and a hit-by-pitch that forced in the tying run with one out. Yugo Aoki then singled sharply to right field to end it and bring the players out of the dugout for a happy huddle near first base.