The best basketball player on each Top 25 football team 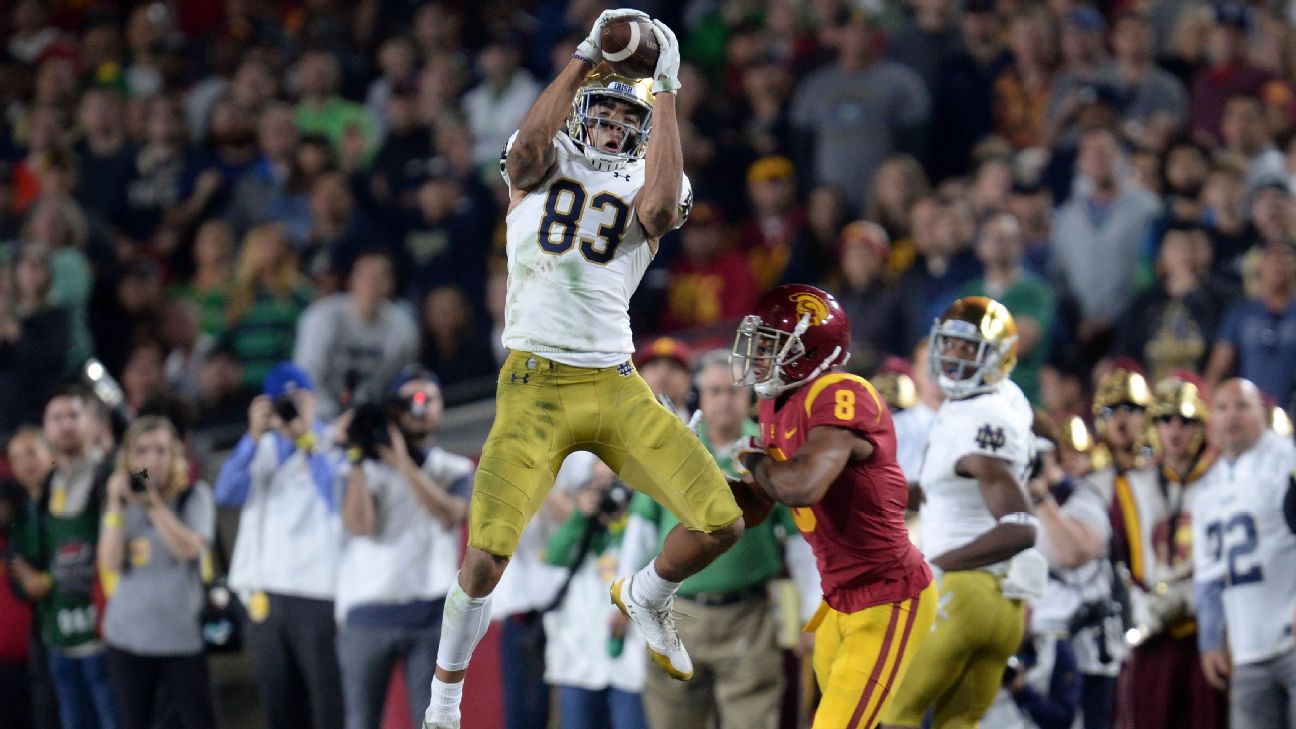 Who is the best basketball player on each Top 25 football team? This one is sure to cause some debate in the locker rooms. But as we get ready to crown a national champion in basketball, it's time to appreciate the athletes who can do it all.

Here are the two-sport stars, the freak athletes and one hyper-competitive coach who are the best basketball players on their football teams.

With all due respect to a team filled with stellar athletes, including a group that played intramural ball this offseason and earned Trevor Lawrence headlines for a little scrap, there's only one answer for this, and it's the man at the top: Dabo Swinney. Swinney has a court at his house, he is known to run with recruits, and as Deshaun Watson once said, he doesn't let them win. Swinney sank a few shots during intramurals this year, too. He was part of a two-on-two game with other coaches a few years ago that was widely reported by the son of former Arizona coach Rich Rodriguez, with one coach suggesting that Swinney was a chucker. "No, when you make the shots," Swinney retorted at the time, "you're called a shooter." -- David M. Hale

Don't let rising junior receiver Henry Ruggs III's slight, 6-foot frame fool you. He's more than just a speedster; he has the hops to go with it. His 360-degree dunk is a sight to see. It's no wonder that before he became a top-shelf football recruit and one of the Crimson Tide's top playmakers, he was known for what he did in basketball. -- Alex Scarborough

Through his first two years of high school in Midwest City, Oklahoma, Jalen Redmond didn't even play football so that he could focus on hoops. In one game, he had six dunks, prompting Arizona State football coaches to offer him a scholarship on the spot. Although a recurrence of blood clots ended Redmond's freshman season, the defensive end is loaded with potential.-- Jake Trotter

LeCounte, a former five-star prospect who led the Bulldogs in tackles last season, wasn't just a serviceable basketball player back home in Riceboro, Georgia. He was a standout who averaged double-digit points in his career. He was named Player of the Year in his region as a junior and helped Liberty County High to a state championship, in which he scored a team-high 20 points. -- Scarborough

The Buckeyes' leading tackler punishes rims like he punishes oncoming ball carriers. He was an honorable mention all-state player in high school and has put together a pretty solid start to a mix tape in some of the dunk contestshe has dominated against his football teammates. -- Dan Murphy

The night before Notre Dame's Canadian import signed his letter of intent with the Irish, he scored 51 points for his high school basketball team in British Columbia. The 6-foot-4 shooting guard averaged more than 40 points per game his senior season.-- Murphy

Coming out of high school, Epps received scholarship offers to play basketball, including from rival Texas A&M. One of Epps' hoops highlights came in the third round of the Class 6A playoffs, in which he nailed a buzzer-beating 3-pointer to propel Dekaney High (Houston, Texas) to the next round.-- Trotter

The 6-foot-5, 343-pound Slaton could dunk a basketball by the time he reached seventh grade, and he played both football and basketball throughout his high school career. He was good enough on the hardwood to earn some Division II and junior college offers, but as one of the top-rated offensive linemen in the class of 2017, it would've been hard for him to turn down football. Slaton moved over to defense, where he is in the mix for more playing time in 2019. -- Andrea Adelson

The Kansas City, Missouri, native was committed to playing mid-major hoops at Missouri State before Michigan found his football highlight tape. He flew under the football radar because he spent his summer on the AAU circuit, where he showed that he could create his own and get to the rim as a 6-foot guard. -- Murphy

At one point in his high school career, this Oregon walk-on wasn't even thinking about playing college football. He gave up the sport after his freshman year to focus on basketball -- in which he was a double-digit scorer -- only to return to the sport for his senior season after transferring high schools. He has added bulk since high school, but now -- at 6-foot-3, 240 pounds -- it's clear that his choice to switch his focus back to football made sense.-- Kyle Bonagura

Look up the highlightsof Martin's high school hardwood exploits, and it's clear that he's the guy to beat on the A&M roster. As an all-state selection in both football and hoops at Cajon High in San Bernardino, California, the 6-foot-5 Martin showed out. His dunks show him to be an effortless leaper, and he appears to have good shooting range as well.-- Sam Khan Jr.

There are a handful of guys on the Tigers' roster who can contend for this title, but we'll give the nod to Marshall. He was a dual-sport star at Parkway High in Bossier City, Louisiana, earning all-district and all-city honors in hoops. At 6-foot-4, 210 pounds with good leaping ability, Marshall seems like a good bet on the hardwood.-- Khan

Before Martin ended up in Pullman as a standout receiver for the Cougars, he was at one time committed to play basketball at the University of New Orleans. As he developed, though, it became that clear football was the sport he projected better at in college (and, likely, beyond). Still, Martin averaged 20.1 points per game as a senior and was the co-MVP of his district in Louisiana.-- Bonagura

A four-star recruit out of Alabama, Williams starred on the football and basketball teams in high school. As a junior, he won a state championship in both sports. At 6 feet, 222 pounds, he played forward on his high school team. He is one of the bigger receivers on the UCF roster and has 504 yards receiving and three touchdown receptions headed into his junior season. -- Adelson

We're told that this award could stir some serious locker room debate among a number of Orange players who think they're the kings of the court, but it's hard not to hand the honor to receiver Trishton Jackson. The former Michigan State player got his first taste of action in a Syracuse uniform during the bowl win over West Virginia, but he also gave some serious thought to playing for the hoops team this season, too. A point guard in high school, he played AAU ball in Michigan alongside the likes of Miles Bridges.-- Hale

Quarterback Tommy Stevens got a nod as one of the best basketball players on the team, but Parsons' combination of size, athleticism and speed would make him a difficult matchup. He's 6-foot-3, 240 pounds, and there aren't many people who are going to want to take a charge with Parsons running at them full-speed. Parsons played in high school, but his final season was cut short due to an injury. -- Tom VanHaaren

One of the standouts of Washington's incoming recruiting class, Nacua had an accomplished career as a high school athlete. The Gatorade State Player of the Year in football led Orem (Utah) to a state title, and he was one of the best basketball players in the state, earning second-team all-state honors from coaches as a junior. As a sophomore, he averaged 13.8 points per game, according to MaxPreps.-- Bonagura

After four years of varsity basketball at San Clemente High in Southern California, Fotheringham left as the school's all-time winningest player. As a senior, he averaged 12 points and 10.6 rebounds per game on a team that won the South Coast League title and advanced to the second round of the CIF playoffs.-- Bonagura

Skowronek is from Fort Wayne, Indiana, he's 6-foot-4, 210 pounds, and he's a wide receiver. All of that adds up to having some basketball skills. He has the size, athleticism and skills and was mentioned by people around Northwestern as the best basketball player on the team. He was part of a state championship basketball team in high school at Homestead and earned two varsity letters in basketball. -- VanHaaren

The Cardinal had one of the best basketball-playing football players in the country on their roster last season in receiver JJ Arcega-Whiteside, but there isn't anyone left with his résumé (he was a McDonald's All-American nominee in high school). At Corona Del Mar High (Newport Beach, California), Le led the team to three league titles and was a second-team all-conference pick in 2016.-- Bonagura

At 6-foot-5, 230 pounds, Ferguson would have good size on the court. He was named third-team all-conference as a senior in high school and helped his team to the state semifinals the same year. Wisconsin has a few options and some good basketball players on the team, but given Ferguson's size and athleticism, he would be the pick for the Badgers.. -- VanHaaren

This was a big debate at Iowa, but Merriweather gets the nod. Defensive end A.J. Epenesa has size and athleticism and scored more than 1,000 points in high school. Offensive tackle Alaric Jackson apparently has some legitimate game as a power forward, but Merriweather's name came up the most. Merriweather had scholarship offers to play basketball out of high school and could have gone that route, but he decided to play football at Iowa instead. At 6-foot-2, 200 pounds, he isn't the biggest guy on the court, but according to those around him, he is the best player on the roster right now. -- VanHaaren

It's not a stretch to see Williams as a basketball star. Just look at how he uses his 6-foot-3 frame at receiver -- the way he positions himself for the ball, the way he leaps over defenders. He was doing the same thing on the hardwood at Paul Bryant High School in Cottondale, Alabama, where he was second team all-state in 2017. An all-around athlete, he was also a state medalist in the long jump and high jump. -- Scarborough

The 6-foot-8, 245-pound frame is a good start, but Allen's high school basketball coach says the former standout was more than just a big body. He averaged 15 points per game and picked up a few mid-major scholarship offers to play basketball after making the all-state team his junior year. -- Murphy