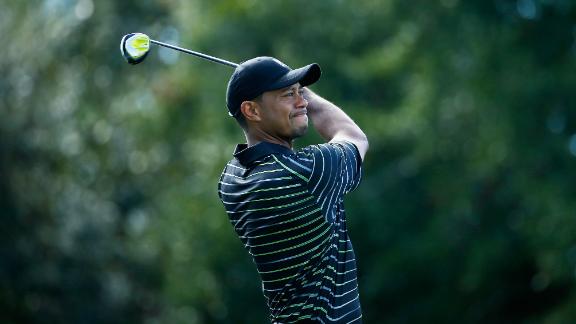 WINDERMERE, Fla. -- The expectations should not have been as great as the anticipation of Tiger Woods' first official round of golf in four months, but it was nonetheless shocking to see some of his struggles Thursday at the Hero World Challenge.

Woods undoubtedly has gone full years without chunking a chip shot, but did so four times during the first round and also left a shot in a bunker.

Those five miscues epitomized a tough day for Woods at Isleworth, where he shot 5-over-par 77 and is last in the 18-man field. He trails tournament leader Jordan Spieth by 11 strokes and is four strokes back of Billy Horschel and Patrick Reed, the only other players in the field over par.

Perhaps that could be expected, given the rust in his game. Woods, however, made no excuses, pointing out that he has a short-game facility in his back yard at his home in Jupiter, Florida.

Woods designed the facility himself. It covers 3.5 acres, allows for shots of up to 150 yards to four different green complexes. There is also a "wedge" range for shots up to 85 yards.

"I just haven't faced grain this thick," he said. "My short game area is very tight. It got a little stickier in the longer grass around the greens and I just hit horrible chips."

Woods is playing competitively for the first time since August, when he missed the cut at the PGA Championship. For the second time in 2014, he shut it down to deal with back issues and did not get back to hitting balls until October.

Woods made a double-bogey, four bogeys and just a single birdie. His round got off to a poor start when he knocked his opening tee shot into a homeowner's back yard. But he made 3 on the second ball to salvage a bogey. He also bogeyed the second hole.

Although he hit just one fairway on the front side and only three greens, Woods was 3 over when he got to the par-4 eighth, where he nearly knocked a tee shot out of bounds, faced a second shot up against a fence, hit a tree, hit his third over the green, then flubbed a chip leading to a double bogey. He shot 41 on the front side.

Woods' first and only birdie came at the 12th. After hitting two solid shots to just off the green on the par-5 13th, Woods chunked two chips, leading to a bogey 6.

He chunked another chip at the 17th, but he managed to hit every fairway on the back nine and seven of nine greens.

For the day, Woods hit eight fairways and 10 greens in regulation.

"I played a practice round with him on Monday, and he flushed it,'' said Jason Day, who also played the first round with Woods. "His short game was on point. To see that many poor chips from Tiger Woods is surprising.''

Woods found some positives, talking about how his "power and speed is back'' and that he was pain-free, a rarity for most of the past year.

"I haven't said that in a long time,'' Woods said. "That's very exciting to be able to step up there and hit the drives I hit, especially on the back nine. I'm launching it and feel nothing.''

Spieth won by six shots in Australia last week for his second career title. The 21-year-old flew home to Dallas, then came out to Florida the next day. He was feeling sluggish on Wednesday, but there was no sign of jet lag on Thursday. And there is nothing wrong with his game.

He ran off five straight birdies starting at No. 6, and saved his round with a 12-foot par putt on the 18th.

"I'm excited about how last week went and I'm kind of riding the momentum," Spieth said. "I'm going to give it my all these last few days."

Nothing Went Right For Tiger
Mark Schwarz and Bob Harig react to Tiger Woods' first round at the Hero World Challenge.