Tiger Woods drops to No. 56 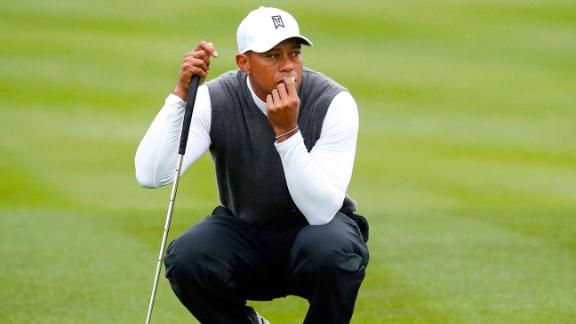 With his drop to 56th in the latest edition of the Official World Golf Rankings released Monday, Tiger Woods could miss out on qualifying for the first World Golf Championship event of 2015.

Woods shot 82 on Friday at the Waste Management Phoenix Open to miss the cut by 12 shots in his 2015 PGA Tour debut. That score tied for the highest number posted by any player in a PGA Tour event this calendar year.

Woods has not been lower than 58th in the world since winning the first of his 79 titles on the PGA Tour at the Las Vegas Invitational in October 1996.

If Woods failed to qualify for the WGC-Cadillac Championship at Doral in March, it would be only the second time in his career he'd be ineligible for a World Golf Championship event. The only other WGC for which Woods didn't qualify was the HSBC Champions in 2011.

There have been numerous opinions on Woods' significant drop, including from Paul Azinger, who is an ESPN golf analyst, a major winner and the last winning U.S. Ryder Cup captain.

"He uses the excuse of rust, and I don't know that I can buy that because Tiger knows there's no shortcut to success," Azinger said on "SportsCenter" on Saturday. "You can't hope for it. You can't wish for it. You have to prepare. And there's no preparation that's gone into this.

"I think when Tiger says rust, to me, it's a signal that he doesn't know what the problem is. I feel he's as confused as he's ever been in his career. He's changed coaches along the way. Byron Nelson used to say there's two kinds of players, those that need to know a little and those who need to know it all. Which one do you think is easier?

"Tiger's in a mode where he feels he has to know it all. Technically and physically, I think he felt like he peaked and he needed more information to get better. ... In the quest to get better, Tiger's actually gotten worse. Now he's confused, and I think that at this point in his career, it's not really what he's accomplished that matters, but what he can overcome. And he's got a lot to overcome both physically and mentally."

Woods is expected to play this week at Torrey Pines in the Farmers Insurance Open. He won that event seven times -- as well as winning the 2008 U.S. Open on Torrey Pines' South Course. He then likely will take two weeks off before playing the Honda Classic, unless he decides to add an event to improve his world ranking.

Woods, who was No. 1 in the world just eight months ago, must be inside the top 50 in the world rankings after either the Northern Trust Open or the Honda Classic to be eligible for the field at Doral. He missed most of 2014 recovering from back surgery and played poorly in the few times he did play.

Never Bet Against Tiger
Michael Collins and Pedro Gomez break down what to expect from Tiger Woods at Torrey Pines.