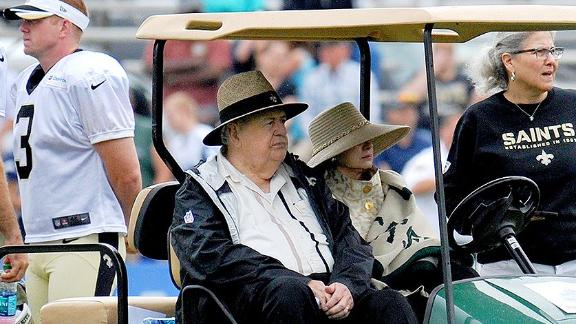 METAIRIE, La. - New Orleans Saints owner Tom Benson has pledged $11 million to the Pro Football Hall of Fame. It is the largest contribution by any individual in the Hall's 51-year history, the Hall of Fame said in a statement.

Ten million dollars will go toward renovating Fawcett Stadium, which will be renamed "Tom Benson Hall of Fame Stadium," the first step in a "master plan" for major upgrades and expansion of the Hall of Fame Village.

Benson also pledged an additional $1 million to the Hall of Fame's Legends Landing Program, a new, mixed-use residence that includes room for retired players and Hall of Famers.

"This is a donation that I feel very strongly about," Benson said in a statement. "I have taken great pride in the recovery and renaissance of my home city, New Orleans, not only prior to but, more importantly, post-Katrina. We have done great things in our city, and today we can proudly present New Orleans as a city that is a role model to other communities. We are proud of that. So when approached to make a donation to the Pro Football of Fame in Canton, Ohio, I did not think long at all about why we should help."

Benson is sending a letter to the rest of the NFL owners on Monday to challenge them to match his $1 million donation to the Legends Landing Program.

In the letter, Benson said the game is facing unprecedented challenges and scrutiny, and these are "unusual times that call for positive and unified leadership." He stressed that the opportunity to keep growing the game and supporting the great men who have played it is more important now than ever.

"I think it is important that we, as owners, as teams, as administrators, players and coaches all recognize the origins of our game and embrace the future. I believe the Hall of Fame Village will be the preeminent focal point of that," Benson said in the statement released by the Hall of Fame. "It encompasses everything our league stands for, and it will do it in one place -- Canton, Ohio -- the home to the Hall and the birthplace of our great game."

Benson, 87, is one of the NFL's longest-tenured owners. He has owned the Saints since 1985. He spent many of his years on the league's finance committee and served as chairman three times.

"Tom Benson's leadership has been instrumental in the NFL's success and growth for nearly 30 years, as owner of the Saints, including more than 20 years as chairman of the league's Finance Committee," NFL commissioner Roger Goodell said in a statement. "His generous gift to the Hall of Fame will forever link Tom's legacy to the game he loves and the legends who helped build it."

Benson also purchased the NBA's Pelicans (then the Hornets) in 2012. He has been widely credited for keeping both franchises in New Orleans when their futures were in doubt. He and his wife, Gayle, have been increasingly generous in their philanthropic endeavors. Earlier this year, they donated $5 million to support the Team Gleason House for Innovative Living, started by former Saints player Steve Gleason, who has ALS and has dedicated his life to aiding others with similar incurable neuromuscular disorders.

Benson was approached by Hall of Fame president David Baker earlier in the fall about making the $10 million donation to kick-start the Hall of Fame Village Master Plan, which also includes a sports and entertainment complex, a high-end hotel and conference center, a center of athletic performance and safety, a youth football center, playing fields, an institute for integrity and officiating, a coaches university, an academy of corporate excellence, thematic restaurants, retail outlets and attractions to enhance the fan experience.

Benson had previously been the first NFL owner to buy an Arena Football League team, back when Baker served as the AFL commissioner.

"Tom Benson's legacy to this game is indelible," Baker said. "His deep passion and unwavering promotion of the game's values are perfectly aligned with the Hall of Fame and its mission."