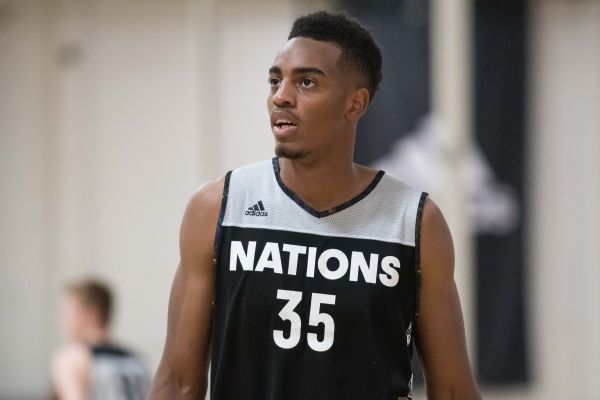 "It's a great organization, would love to play with coach [Dana] Altman as my head coach," Brown told ESPN. "The style of play fits me very well for my versatility. I'm comfortable with the players that will be there."

Brown took official visits to all five of his finalists in September and October, but Oregon has been among the favorites for the talented perimeter prospect for a long time.

Assistant coach Tony Stubblefield was the lead recruiter on Brown.

"Coach Stubbs did an amazing job of recruiting me," Brown said.

Brown, a 6-foot-7 forward from Centennial High School (Nevada), is ranked No. 18 in the ESPN 100. He became an elite-level recruit early in his high school career. Brown had a standout performance at the LeBron James Skills Academy the July after his freshman season, and he was immediately considered one of the best prospects in the 2017 class.

Brown's stock dropped a bit as a sophomore and junior, but a strong showing at the USA Basketball tryouts in June and an impressive spring and summer with the Las Vegas Prospects on the Nike EYBL circuit brought him back into five-star status. Brown averaged 16 points, 8.3 rebounds and 3 assists with the Prospects.

There should be a big role waiting for Brown as a freshman at Oregon. Starting center Chris Boucher and former Villanovatransfer Dylan Ennis will be out of eligibility after the upcoming season, while Dillon Brooks and Tyler Dorsey could decide to leave early for the NBA draft after both players tested the waters this past spring.

Brown is a versatile perimeter player who can handle the ball, initiate offense for others and has the size to defend wings and forwards. He has also improved his outside shooting over the course of his high school career. Expect him to combine with Casey Benson and freshman Payton Pritchard in an interchangeable perimeter trio when he gets on campus.