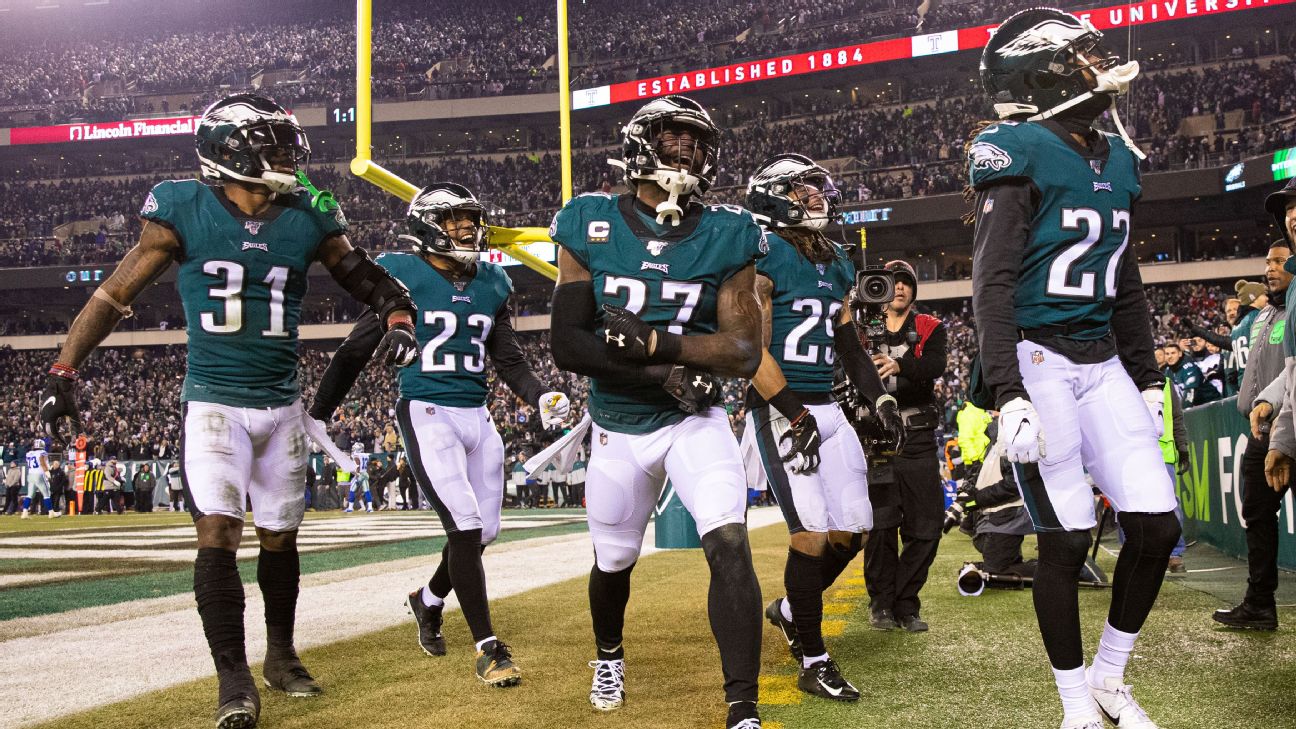 The Dallas Cowboys are kindling for any kind of overreactions column, and so we begin this week with their inexplicable loss to what's left of the Philadelphia Eagles. In a game that could have clinched the NFC East after a frustrating season of stops and starts, the Cowboys failed to score a single touchdown. The Eagles begged them time and again to take the game and the division, and Dallas just kept turning it down.

Astoundingly, the Cowboys are not dead yet. The Eagles still need to beat the Giants -- a terrible team, yes, but a team the Eagles needed overtime to beat at home two weeks ago with their backup quarterback starting -- or have the Cowboys lose to Washington to claim the division title.

But what we do know, after Sunday, is that the NFC East winner this season will be either a 9-7 Eagles team or an 8-8 Cowboys team. And by virtue of being a division winner, that team will host a playoff game against a team that has won at least 11 games and possibly 12.

In a sporting day and age when so many people clamor so desperately for fairness, this is seen by many as some sort of outrage. How can an obviously inferior team be granted a home playoff game against an obviously superior one simply because it was the best of one particular bad four-team bunch? Some will call for the whole system to be overhauled, and it won't be -- because NFL owners still believe the division title should mean something and carry a reward.

So, because there's not a ton to say that hasn't been said about this Cowboys season or this Eagles season, I thought we'd start this week's Overreaction Monday column -- for more, check out NFL Live at 2:30 p.m. ET Monday on ESPN and in the ESPN App -- with this little ditty:

The verdict: OVERREACTION. You can ding those stodgy NFL owners for a lot of things, but they're right on this one. Each year in training camp, as teams lay out their goals for the season, one is to win their division. This is because they know it carries the reward of a home playoff game, yes, but it carries that reward because of the way the season sets up.

You play each of the other three teams in your division twice each season, and the other 10 games on your schedule rotate based in part on the previous year's standings and in part on a simple rotation. But as long as the schedule is set up that way -- as long as 37.5% of your games are against division foes -- there has to be some significance to winning the division.

You build your team, in part, with an eye toward defeating the other teams in your division, because you know that's the surest path to a postseason tournament that is something of a crapshoot anyway. And maybe I'm just saying this as a grumpy old guy who has been preaching it to his sons for the past decade and a half, but ... enough already with "It's not fair!" Life isn't fair. Our job isn't to adjust the world around us to make it fair, because that's futile anyway. Our job is to solve the puzzle we're given -- to assess our circumstances and the best way to succeed within them.

Whichever team wins the NFC East will have done what it set out to do when it made its plan for how to make the playoffs this season, and it will deserve the same rights and rewards that the other division winners get. And if the Seahawks or Saints or Packers or 49ers or Vikings don't like it, then they should do better against the other teams in their division next year.

The Titans were smart to sit Derrick Henry on Sunday

Once the Texans won Saturday, the Titans knew they could no longer win the AFC South, and their only path to the playoffs was via the No. 6 seed in the AFC, for which they must beat out the Steelers (and Raiders, who still have a slight chance).

They knew they needed the Steelers to lose one of their last two games to have a chance, and that, because the tiebreaker the Steelers held over them coming into the weekend was their record against AFC opponents, a victory over the NFC Saints wouldn't help. So they decided to rest Henry and his sore hamstring in the hopes that he'd be at full strength to help them beat the Texans next week in a more important game.

The verdict: NOT AN OVERREACTION. The Titans lost, sure, but they had plenty of chances to win this game even without their most vital offensive cog. More importantly, the Steelers lost to the Jets, meaning the scenario the Titans envisioned has come to pass. If they win in Houston next week, they qualify for the postseason as the No. 6 seed in the AFC, no matter what Pittsburgh does.

They also can make it as an 8-8 wild-card team if they lose but the Steelers and Raiders lose, too. If a week off helps Henry's hamstring and he dominates the Texans in a victory that puts Tennessee into the playoffs, this will look like a genius move.

The Bills are the playoff team no one wants to face

Buffalo took the Patriots down to the end Saturday in a game that could have kept them alive in the hunt for the AFC East title.

Losing ensured that they'd be the No. 5 seed instead, but the fact that the Patriots' victories over the Bills this season were by six points and seven points can't make the Pats comfortable with the idea of facing them again -- even in Foxborough, where Saturday's nail-biter was played.Buffalo is 6-2 on the road this season, so being a wild-card team doesn't necessarily kill their chances.

The verdict: OVERREACTION. Look, they've shown they can hang with good teams. Their defense is nasty. Their quarterback has no fear, will try any throw, can run like crazy and is a nightmare to tackle. John Brown can burn any defense. The Bills absolutely can win a playoff game against one or two of the AFC's elite, and it won't be any kind of stunning upset if they do.

But if you're an AFC playoff team, the idea of trying to stop Lamar Jackson or Patrick Mahomes has to be scarier at this point. And as disjointed as New England's offense has looked, who's going to feel as if they have Tom Brady beaten until the final score shows it? Buffalo is a team on the rise, and a worthy playoff team. But there are scarier ones in the AFC field, for sure.

Joe Burrow will be a Cincinnati Bengal

Even though they played the final couple of minutes of regulation like a team that doesn't want the No. 1 overall pick in the 2020 NFL draft, the Bengals did lose in overtime to the Dolphins to ensure that they will be on the clock first in late April.

Burrow, the Heisman Trophy-winning LSU quarterback who took over college football this season, is thought to be the front-runner to be the first player taken in the draft.

The verdict: NOT AN OVERREACTION. Andy Dalton has one more year left on his contract, but it's not guaranteed, and he was already benched once this year for fourth-round pick Ryan Finley.

And it's hard to believe Finley is the answer, since they benched him for Dalton late in the season in order to try to avoid going 0-16 (and haven't gone back to him since getting the win that ensured they wouldn't).

The Bengals hired Zac Taylor as their coach last offseason in part because they saw him as a guy who could help develop a young quarterback. They have the first pick. They'd be foolish not to use it on a quarterback, and at this point there's no reason to think Burrow isn't the guy. He might as well be house-hunting in Northern Kentucky.

Daniel Jones is the long-term answer for the Giants

Sunday's game in Washington was a battle of 3-11 teams playing absolutely no defense, but the two starting quarterbacks were Jones for the Giants and Dwayne Haskins for Washington -- two rookie first-round picks.

Giants general manager Dave Gettleman took a lot of grief for picking Jones at No. 6 overall with Haskins on the board and another pick to come at No. 17, but he took him because he believed Jones would be the long-term franchise quarterback the team needs to succeed Eli Manning.

Jones on Sunday looked the part, completing 28-of-42 passes for 352 yards and five touchdowns in an overtime victory.It's the fourth time this season he has thrown four or more touchdown passes in a game.

The verdict: OVERREACTION. Kind of like the Bills' one above, right? Too soon to say this for sure. Jones has all the ability he needs to make it as a long-term starter in the league, and his good games have been somewhat off-the-charts good. But Sunday was the first time Jones has started an NFL game and not committed a turnover in it. He has thrown 11 interceptions and fumbled 16 times (lost 10) in 11 games.

The lack of turnovers Sunday was far more encouraging, if you're thinking about Jones' long-term prospects, than the gaudy passing numbers were. We know he can throw and run. We need to know if he can get his turnover problem fixed, or else the best-case scenario is a Jameis Winston situation. And by the way, he missed the previous two games because of injury -- something Manning never did once in 16 years.

The standards for franchise quarterback in New York are high. Jones, at times, looks the part. But he has more to prove. 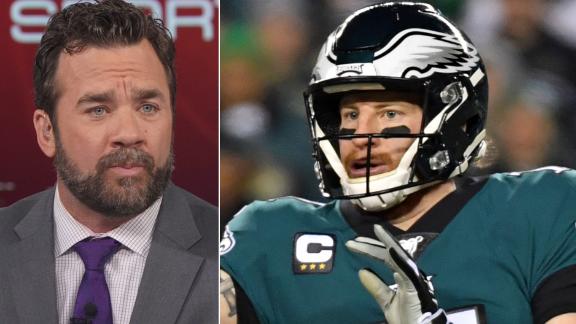 Saturday: Eagles finding their flow when it matters
Jeff Saturday says this Eagles team doesn't have a quitting mentality and details how they're finding ways to win when it matters most. 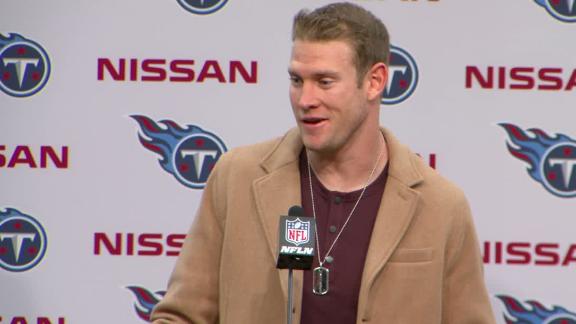 Tannehill: We want Derrick Henry to get back
Ryan Tannehill discusses the importance of Derrick Henry and how it will be nice for him to play next week after sitting out in Week 16. 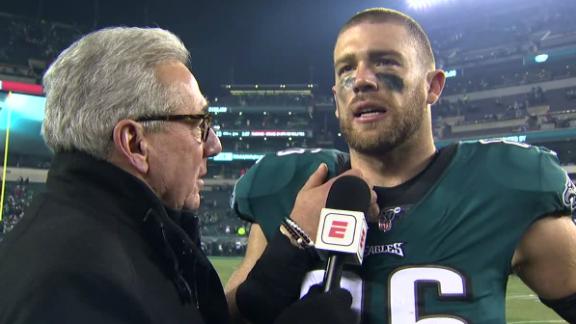