Which player had the best sneakers of Week 19 in the NBA? 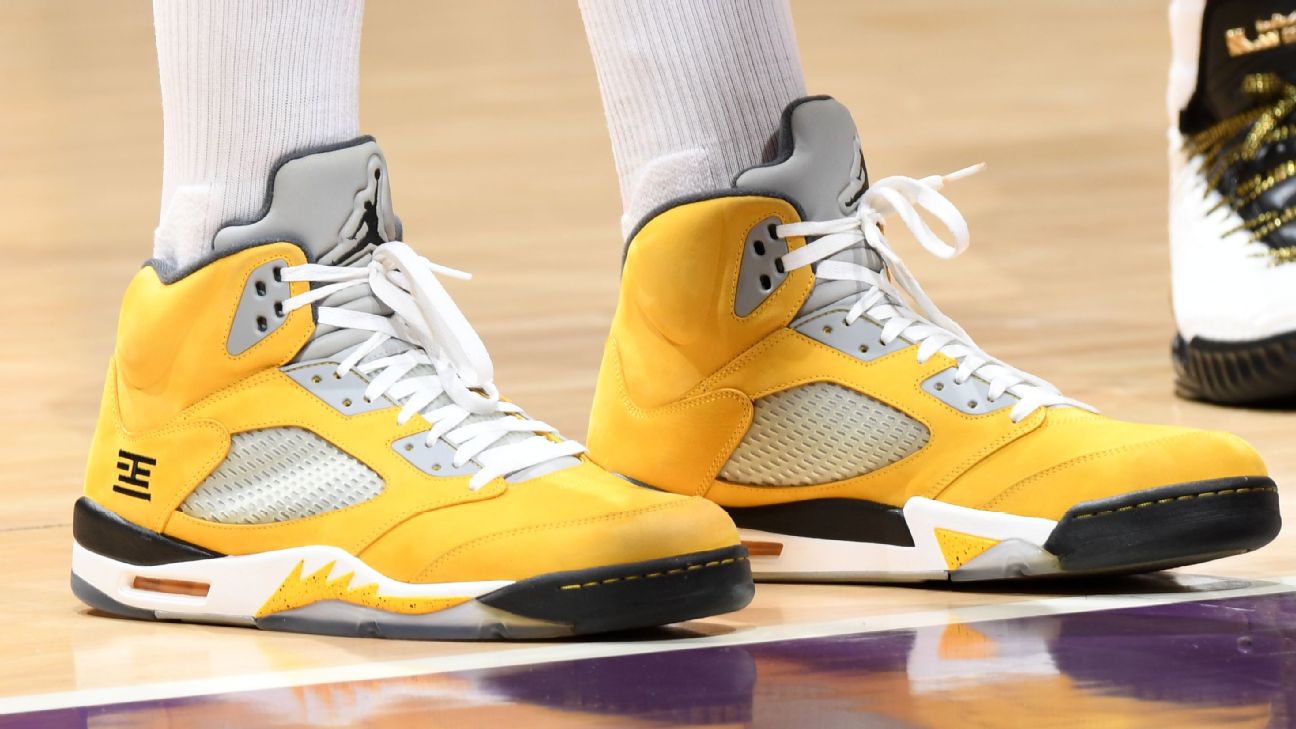 PJ Tucker is constantly on the hunt.

Since his college days at Texas, Tucker has been relentlessly searching for sneakers. As he told The Undefeated over All-Star Weekend, he got his start on eBay and never looked back.

"I actually went to the bank and got a debit card so I could get an eBay account and buy shoes," Tucker said. "My first debit card ... was because of eBay, so I could buy shoes."

Though he laughs now, the passion still hasn't faded. While most assume the reigning sneaker champ has every last model he has ever wanted, they would be almost right. He recently and finally tracked down a near-mythical pair of the "Tokyo" Air Jordan 5 that have long evaded him, and Tucker excitedly wore them in the very first Houston Rockets game after the All-Star break.

Made in 2011 in limited quantities for the launch of Jordan Brand's T23 boutique in Tokyo, the yellow nubuck shoes were originally thought to only have released in up to a size 13. The unique negative space "23" logo along the heel, designed by Nike's Mark Smith, only added to the appeal.

"I've been looking for those for years!" texted Tucker. "They said no [size] 14s were made, but they made a couple samples and these were Ray Allen's."

With a web of contacts across the globe that he constantly is texting -- Tucker estimates he spends at least three hours of his free time per day searching for sneakers -- the "Tokyo" exclusives finally turned up, along with an even more rare alternate sample.

"I got the yellow toe [version] too," he added.

Since debuting his second Jordan signature sneaker in early January, Oklahoma City Thunder All-Star Russell Westbrook has been hijacking the main stage that is the arena entryway to unveil his latest themed editions on a nightly basis. He has coordinated a construction worker outfit with a neon and orange colorway, hauled in Super Soaker-inspired packaging for a linking colorway and even had a special "Bear Jordan" edition drafting off of a teddy bear and a Valentine's chocolate box.

His latest stunt featured unkempt flowing orange hair along the box lid and a design inspired by the shorts of none other than Chuckie Finster, the lovable cartoon character from the 1990s show "Rugrats." Westbrook later took the floor in a colorway bringing the theme full circle, with hits of orange, blue and purple throughout, and Chuckie's shorts pattern along the collar.

Fellow Jordan signature athlete Chris Paul also has been ramping up his themed colorways this season, unveiling a new pair of his eleventh model inspired by Fred Flintstone. Worn during Houston's impressive short-handed victory over the Golden State Warriors, Paul poured in 23 points with 17 assists in the black-and-orange tunic-inspired printed pair. Fred's trademark light blue tie came to life along the shoe's forefoot strap, and according to CP3, "The Flintstones" edition is just a taste of what's to come.

"I got some fun ones coming out around the playoffs and through the summer," Paul said. "A few shoes paying homage to some of my favorite TV shows and stuff like that. I probably can't tell you everything, but we got some fun stuff coming."

Elsewhere in the league, players got into the school spirit. Golden State All-Star Kevin Durant donned a burnt-orange pair of his KD 11s made for his beloved Texas Longhorns, while Philadelphia 76ers small forward Jimmy Butler honored Tomball High School atop the heel of his latest team Jordan sneakers. Miami Heat forward Derrick Jones Jr. broke out a rare LeBron 6 originally made for New York's Christ The King in 2008; while the Pennsylvania native didn't attend the Queens-based private school, the decade-old pair remains one of the more exclusive and rare LeBron school editions of the era.