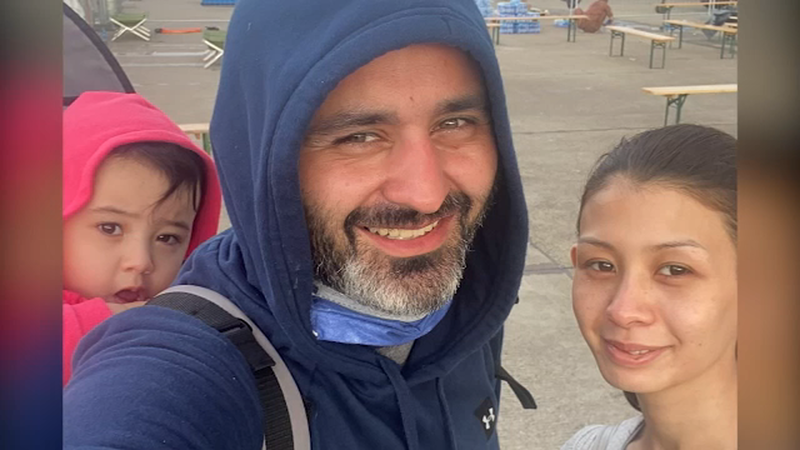 WALLINGFORD, Pennsylvania (WPVI) -- As hundreds of Afghan evacuees touch down in Philadelphia, Amir Sidiqi counts himself as one of the lucky ones.

Sidiqi is an American citizen and a graduate of Strath Haven High School in Delaware County, Pennsylvania. He was living in Afghanistan for the last 11 years as a contractor for the U.S. Army. Then, Kabul fell to the Taliban and he was trapped.

"There were no flights available. The roads weren't an option. You could just feel like you were getting caged in basically," Sidiqi said. "Everything had completely changed. The whole city. All the lights were out, nobody was out on the street. It was a haunted house."

AFGHANISTAN: An English teacher, a US citizen trapped in Afghanistan and a social media post. The incredible journey of how a Strath Haven High teacher helped evacuate his former student…all by accident. Full story at 5 on @6abc pic.twitter.com/SoebY1wW0d

Sidiqi, his wife and his 2-year-old daughter began their harrowing journey to the airport. He said they got stuck at the gate and were refused entry.

"I was screaming at the top of my lungs because I was holding my child and we were out in the dirt next to the flight line," he said. "Thousands of people were behind us."

They were forced to return home, defeated.

"There were a pile of dead bodies over here and another person getting compression with blood coming out," said Sidiqi.

"He said 'if anybody ever says anything to you or makes you feel bad because of where you come from, you just let me know and I'll take care of it,'" Sidiqi recalled Haney's words from back then.

The two have remained in contact over the years.

"I reached out to him and asked if there was anything I could do on my end," said Haney. "Amir responded with something a little haunting and said, 'If you're a man of God, pray.'"

Haney posted on social media, asking for more prayers to get Sidiqi and his family out of Afghanistan.

A childhood friend of Haney saw the post and, as luck would have it, he was a Department of Defense official based in Kabul. That friend was able to get Sidiqi's family safely into the airport.

"I just feel like the universe lined itself perfectly to get my buddy out of there and his daughter," said Haney. "So for me, it's still overwhelming."

Sidiqi said the real story is about the servicemen and women who helped him and countless others to safety.

"The selflessness, the painstaking hours," said Sidiqi. "The sheer will and the power of the American spirit that was there, that is what should be the focus of this."

Haney and Sidiqi said they later found out that the Air Force pilot who flew out Sidiqi and his family from Afghanistan was also a Strath Haven High School graduate.