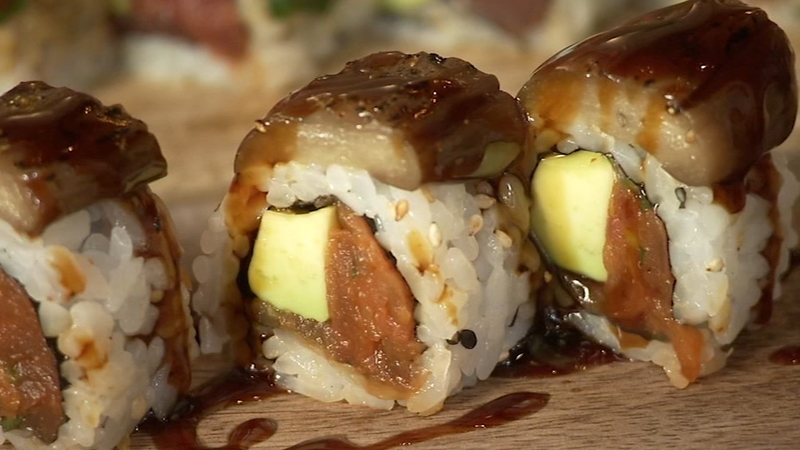 PHILADELPHIA (WPVI) -- Sushi, a Japanese dish, can be found almost everywhere these days...with Philadelphia being no exception.

Here are some awesome sushi spots in the City of Brotherly Love, that I'm sure you're going to love!

Tuna Bar is a Japanese raw bar that opened its doors four years ago in Old City.

Owner Ken Sze transformed an old parking lot into a sleek, modern, yet approachable dining space with some of the best Japanese cuisine around. I was given a sample of every kind of nigiri, and taught how to eat it properly, too. He even makes a nigiri with seared wagyu beef!

I tried some of his special creations, like the Liberty Roll with spicy crab, seared tuna, puffed rice and lemon, and the Broad Street Roll with spicy salmon, avocado, some crunch and all the sauces I love. The shrimp and pork fried rice is a must try as a side dish, or as a meal on its own.

I washed it all down with the Winston's Heat cocktail, with the heat being some wasabi!

Tomo Sushi and Ramen is a BYOB restaurant that opened in Old City four years ago.

Chefs, friends, and business partners, Andy and Steven, knew that they wanted to open something that wasn't offered everywhere...a sushi and ramen restaurant that can appeal to the vegan and vegetarian crowd! And they did just that with this place.

I sampled the Red Dragon vegan roll with eggplant and tomato masquerading as eel and tuna. They also do their own spin on some classics, like the Salmon Don. A bowl with salmon done "5 ways" on top of sushi rice.

Their signature Tomo Roll with spicy tuna, avocado, cilantro, and more tuna on top is one of their most popular. And the Hako roll with eel, avocado, unagi sauce, seared salmon, and strawberry, was almost too beautiful to eat...I said almost.