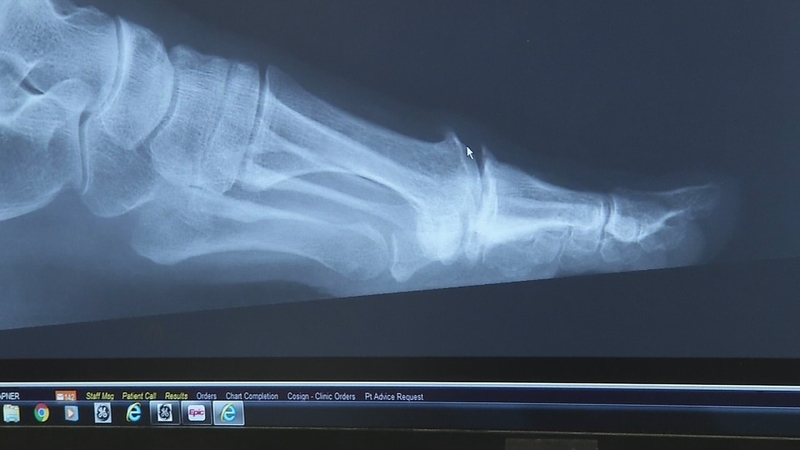 She's been a volunteer dog-walker for Street Tails Animal Rescue, a Northern Liberties-based group. But arthritis at the base of her right big toe was eating into the activities she loved.

"It felt like a stabbing knife in my toe, when I bent that toe," said Murphy.

Running, spinning, and other exercise tested her pain endurance.

There was no cushion in the joint, so bone rubbed on bone whenever she moved, and that friction triggered the growth of painful bone spurs on each side of the joint.

When Murphy first went to Dr. Wapner, he recommended fusion - cutting away part of the damaged joint and wiring the bones together.

"That works very well as far as pain relief, but you do lose motion," he notes.

And for women, high heels are out!

Unable to devote much recovery time, because of her small children, Murphy put off the matter for five years, until the pain was unbearable. By then, Dr. Wapner had a new option - the first FDA-approved synthetic cartilage, called Cartiva. It's made of the same material as contact lenses. While artificial joints work well for knees and hips, they can't withstand the pressures and twisting in a foot.

"They would tend to break down, and would break down quickly," said Dr. Wapner.

After 5 years, only about 20 percent are still intact. So, Cartiva is not a full joint replacement, but a plug, which goes into the bone where Murphy's own cartilage was worn away.

"That acts like a spacer between the bones," says Dr. Wapner.

Cartiva was first approved in Europe in 2002. A study done in Europe and presented at a March 2017 medical meeting shows 90 percent of patients are pain-free 5 years after a Cartiva implant. Some have had theirs longer. If it fails, Dr. Wapner says it's easy to do the conventional fusion.

Murphy was back in her regular shoes about 8 weeks after the surgery - roughly the same time as if she had a fusion.

She's thrilled to be back walking the dogs, and doing her favorite workouts, bending and flexing her foot like before.

"I'm taking spin classes, two to three, or four times a week. I can do reverse lunges, push-ups on my feet instead of my knees," she says, smiling.

She'll be cleared to run and wear high heels soon.

Cartiva could play a big role in joint repair in the coming years. Right now, it is only approved in the U.S. for the big toe. But U.S. trials are wrapping up using it to repair arthritic joints at the base of the thumb; approval for that could come by the end of 2017.

Doctors in Canada and the U.K. have been using it for thumbs for several years.

And it is being used to repair damaged knee cartilage in the U.K..

One follow-up study of 18 European patients showed that five to eight years after surgery all but three patients had significant improvement in knee function and pain. Even patients who eventually needed knee replacements did well for the first four to five years.