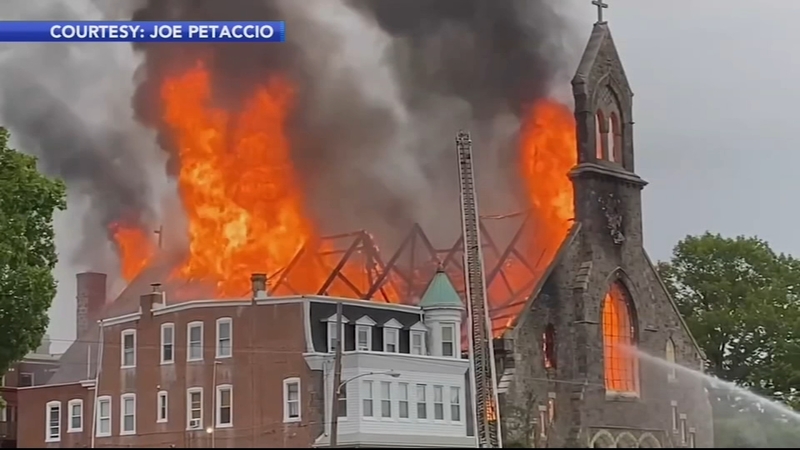 The Bureau of Alcohol, Tobacco, Firearms and Explosives and the Citizens Crime Commission announced a $20,000 reward Thursday for information leading to the arrest and conviction of the person or persons responsible.

"The case is still an ongoing criminal investigation, but our ATF fire investigators - who are certified in fire science - have made the determination it was arson," said ATF Special Agent Charles Doerrer. "We think there will be a lot of people who will come forward because this is sentimental to people in this neighborhood."

A historic church in Philadelphia's Tacony section went up in flames on Sunday afternoon.

Former parishoners, including Francine Strick of Tacony, came by the church after hearing word that authorities believe the fire was intentional.

"There were lots of memories and a lot of love that went into that church. For someone to turn around and set fire to it, I can't imagine," said Strick.

Flames tore through the vacant property that was built in 1884. The blaze reached two alarms before it was brought under control.

St. Leo's merged with Our Lady of Consolation in 2013. The church closed in 2019 as a place of worship and was later added to the city's historic register. The church was sold a month ago to an owner who specializes in restoring churches and planned to rent it.

Authorities say the new owner is fully cooperating with the investigation.

Dozens of neighbors looked on as a contractor took a wrecking ball to the remains of the building on Monday, many of them saying goodbye to a church that has hosted generations of their families.

After a devastating fire burned a historic church in Tacony, officials had to knock down the remains of the building for safety reasons.

Anyone with information on the person or persons responsible for the fire should contact ATF at 1-888-ATF-TIPS (888-283-8477), email ATFTips@atf.gov, or contact ATF through its website at www.atf.gov/contact/atftips. Tips can also be made to the Philadelphia Fire Marshal's office via mobile device by following: bit.ly/PHLarsontips
Report a correction or typo
Related topics:
tacony (philadelphia)crimechurch firefirereward
Copyright © 2022 WPVI-TV. All Rights Reserved.
TOP STORIES
'I fought': Trevor Reed describes his survival in a Russian prison
6 dead, multiple injured in Philadelphia weekend shootings
Arby's is selling a fast-food staple it's never offered before
Teen, officer and driver injured after police chase ends in crashes
2 men stabbed at Philly train stations, including 30th Street Station
Starbucks is leaving Russia for good
More than 75,000 pounds of baby formula lands in US amid shortage
Show More
Mask mandate returns to School District of Philadelphia
Pfizer: COVID vaccine for kids 6 months to 5 years old 80% effective
Russian sentenced to life in Ukraine's 1st war crimes trial
Biden: Monkeypox threat doesn't rise to level of COVID-19
Texas woman sought in fatal shooting of pro cyclist: US Marshals
More TOP STORIES News