Crews forced to knock down historic St. Leo's church in Tacony after fire 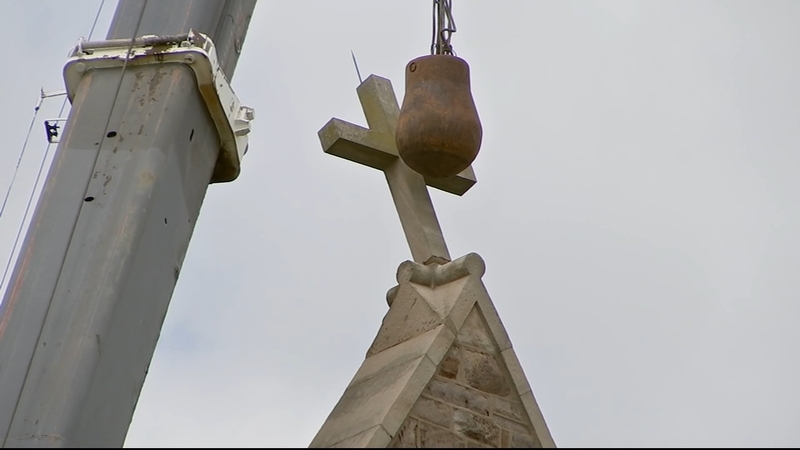 Crews forced to knock down historic Tacony church after fire

PHILADELPHIA (WPVI) -- After a devastating fire burned a historic church in Tacony, officials had to knock down the remains of the building for safety reasons.

Dozens of neighbors looked on as a contractor took a wrecking ball to St. Leo The Great Roman Catholic Church on Keystone Street and Unruh Avenue on Monday, many of them saying goodbye to a church that has hosted generations of their families.

Raw video from the Action Cam shows crews demolishing the remains of a church that was destroyed by fire over the weekend in the Tacony section of Philadelphia.

"Pretty heartbroken to see this. This is like part of my life, part of my history and it's gone," said Michael Riley, who has lived in the neighborhood for decades and graduated from St. Leo's.

"I turned around, I could see the sadness in people's eyes and people filling up with sadness," said Councilman Bobby Henon.

The fire tore through the historic church starting 5:30 p.m. Sunday.

One hundred firefighters battled the flames for hours as much of the church burned to the ground. No one was hurt, but L&I did deem the building unsafe following the flames.

"I was heartsick seeing it on the news, but seeing it in person was sad, and remembering everything that was so beautiful in there," said Barbara Helverson Kemery.

As she watched crews knock down her church, memories flooded back.

"My sister being married here walking down the aisle, my mom was buried from this church, making my communion going years back," she said.

The church first opened in 1884 and was active until 2013 when the archdiocese consolidated parishes. For the next six years, community members could still worship inside, but the doors closed in 2019. One month ago, a developer bought the building.

Neighbors say there is a time capsule from 1984 inside next to the cornerstone. The fire marshal says once it is safe to get in, crews will recover that for the neighborhood so they will always have a piece of their church.
Report a correction or typo
Related topics:
tacony (philadelphia)church firefire
Copyright © 2022 WPVI-TV. All Rights Reserved.
TOP STORIES
DA: Person shot, killed by officer after struggle in Malvern, Pa.
CDC advisory panel greenlights booster shots for children ages 5 to 11
FTC warning: Baby formula scammers are preying on parents
Delaware AG now investigating condemned Wilmington apartment complex
What is monkeypox? What to know after US confirms 1st 2022 case
Rihanna and A$AP Rocky welcome their first child
Eagles have a loaded roster, but will QB hold them back?
Show More
Delco bus driver accused of taking upskirt photos of students
Rise in brazen thefts force convenience stores to close
Blasian Solidarity unites Philly's Black, Asian communities for good
5 people shot in North Philadelphia near Temple University
Ford recalls SUVs due to engine fire risk
More TOP STORIES News