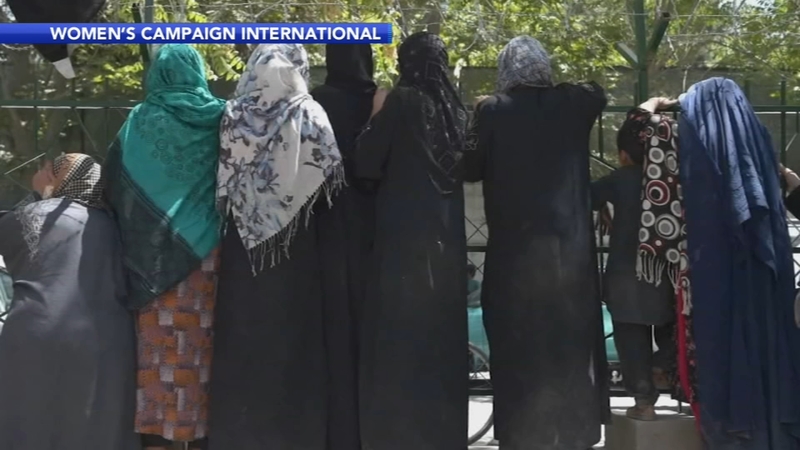 PHILADELPHIA (WPVI) -- The images are heartbreaking: people clinging to the wings of airplanes as they try desperately to escape Kabul after the Taliban took over Afghanistan's capital.

"It's really heartbreaking. It's difficult to even put into words," said Sofi Tamimi, program manager of Women's Campaign International, a nonprofit based in Philadelphia to help women around the world.

As a person whose family fled Pakistan, she has a sense of the desperation they feel. Through her work with Women's Campaign International (WCI), she knows how dangerous the situation in Afghanistan is, particularly for women. Some of those women work with WCI. The organization has had programs in Afghanistan since 2006.

"Things like financial literacy, empowerment in general, leadership skills -- all those things they need to be successful," said Tamimi.

One of the people who had been helping with the programs now finds herself trapped in the country amid the danger.

"She went to Kabul to plan and prepare for a women's empowerment and leadership series," said Lilly Price who is the operations manager for Women's Campaign International.

Some of the women who'd been doing work with WCI tried to dig in their heels to stay in the weeks leading up to the Taliban takeover.

"The women said, 'We don't know what's going to happen, but we have to be here,'" recalled Price.

Now, for many of them, staying is not an option. Some of the women are said to be on the Taliban's list, facing death threats that make it too dangerous for 6abc to even show their pictures or say their names.

"As a known feminist and women's empowerment organizer, (she's) known to be a target," said Price of one worker.

Price is now spending her days in Pennsylvania trying to book a flight out of Kabul for the Afghan national worker who is trapped. She details the ordeal of securing the woman a COVID-19 test in order to book her flight. After the test came back negative, another obstacle arose.

She hopes that filing special documents with the US Embassy in Kabul will be the ticket to helping the worker escape. But she knows there are so many more who are still left to try desperately.

"I think it's life and death for a lot of people," she said.