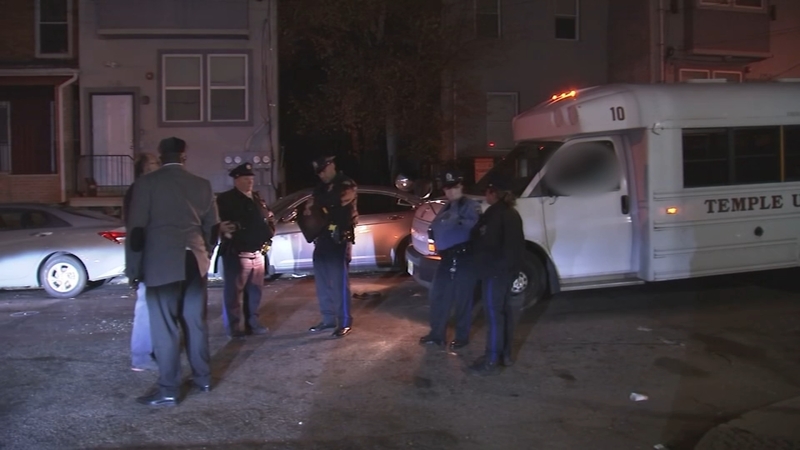 Temple U shuttle bus crashes after man fires gunshots nearby

PHILADELPHIA (WPVI) -- Tensions are high in and around Temple University after a string of armed robberies, carjackings, and shootings have rocked the college campus.

"There's a pretty much general consensus on campus. It's scary knowing you pay to go to school here, and this is what you have to worry about," said Ethan Trzaska, a sophomore from Quakertown.

Junior student Anthony Woody from Oxford said, "I live off-campus, but I tend to avoid going to restaurants and places to eat at nighttime because of the danger."

On Friday, a Temple University shuttle bus, which transports students from campus to their homes, was driving south on 12th Street near Dauphin and Nevada streets when the driver heard a series of gunshots.

"The driver of the school bus said he had never heard gunshots before, and it startled him," said Philadelphia Police Inspector DF Pace. He stopped his bus, and at that point, a dark-colored vehicle came from Nevada onto 12th and struck the Temple University shuttle bus causing minor damage to the front."

Police say the driver of the car got out and fired at least three more shots in the area where the shuttle bus was located.

This crash is just the latest incident after a student was robbed at gunpoint on Wednesday -- and student Samuel Collington was murdered on November 28 while returning home to his off-campus apartment.

"There's more tension than there was last year. I think there are a lot more people on edge," said Ian Hadin, a junior from Bridgewater. "I mean, I'm on edge all the time seeing everybody."

Freshman Samantha Kruopas from New Hope said, "We thought we could go anywhere we want, and we weren't really cautious, but ever since the recent stuff, we've definitely been taking Ubers and making sure there's are a lot of people with us."

Temple University officials say they are deploying more patrols and working with Philadelphia Police Department to watch over key areas.

Police are still looking to find the shooter involved in the shuttle bus crash.