'Bachelorette' Tayshia picks her final 4; confrontations during 'The Men Tell All' 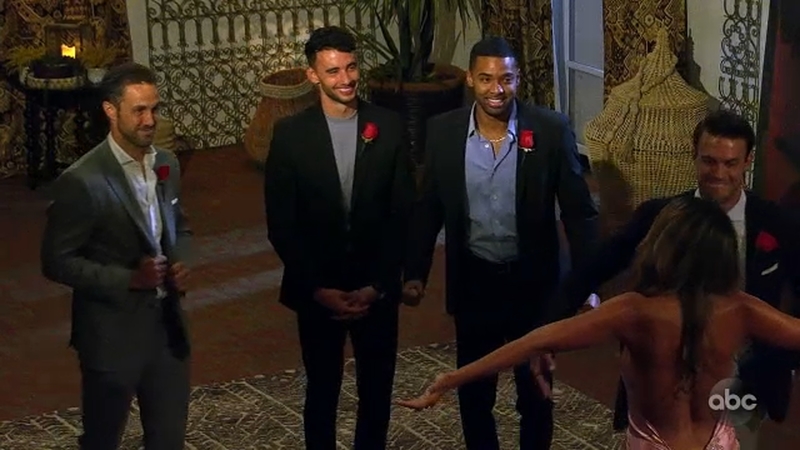 NEW YORK -- Tayshia had to pick her final four, but first, she had to deal with Bennett coming back and figuring out whose hometowns she wanted to visit. She woke up the next day after his big return feeling overwhelmed. Chris Harrison made his big return after taking his son to college. She told Chris, "I needed you! Where have you been?" 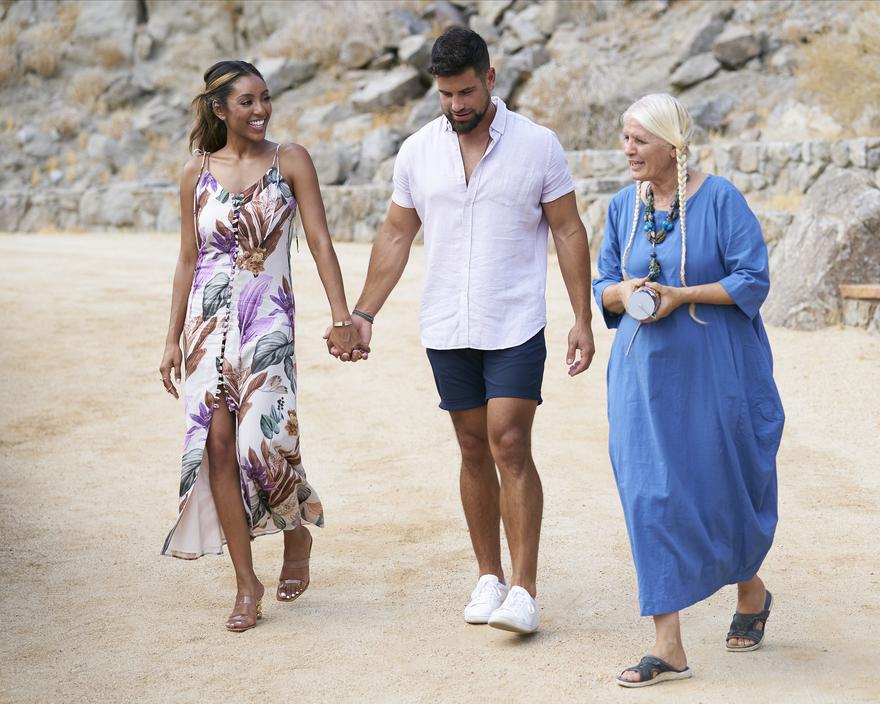 Blake's One-on-One Date
To recap, she didn't hand out a group date rose yet, and Blake has his critical one-on-one date. They met up with a crystal master to seek answers about their relationship. He's a wildlife manager so maybe this could be a cool experience for him. They talked about the importance of communication before they went and examined their chakras. Anyone else think that there's no way Blake is going to get a rose? Blake said that he felt like they were making progress, but Tayshia said, "I don't know..." She didn't even want to do the dinner portion of the date; she knew in her heart that he wasn't the guy for her. Tayshia told him, "I think it's time to go our separate ways."

WATCH: Blake's interview about 'TMTA' and his time on 'The Bachelorette'
EMBED More News Videos

Jennifer Matarese interviews Blake Moynes over Zoom about his experience dating Tayshia on "The Bachelorette."

Tayshia Breaks Up with Riley
She went back to the group of men she had remained and told them how she sent Blake home and couldn't stop crying about it. It was crazy. Zac was like, really, it's ok. Ben just sat there smiling! It's like she just watched "Steel Magnolias" and got stuck in a cry. It happens. Then she asked Riley to go talk suddenly. They went outside and told him she couldn't put him in the position of meeting his family if her heart isn't matching his. "What am I missing?" he asked her. Tayshia said, "I can't help where my heart is right now." She said she kept him around because they were having breakthroughs in their conversations, but they just didn't get there in time. He told her he got it, the end result would be the same no matter how much he argued it. He graciously left and Tayshia cried some more.

Canceled Cocktail Party
Before the cocktail party could officially begin, Bennett walked in. The guys were shocked, especially Noah! But, shocker, Chris Harrison came out and told the men she has already made her mind up and she is canceling the party.

3) Ivan
4) Brendan
That meant that Bennett was gone again and poor Noah. Maybe they were each other's downfall. Noah teared up and cried as he left. He really had strong feelings for her.

The Men Tell All - Bennett vs. Noah
Before we could get to the hometown dates, it was time for "The Men Tell All." There was no audience and the guys all sat with Chris Harrison and talked about how wild it was to have two "Bachelorettes." They dug back into the Noah and Bennett drama. Kenny interjected with some curse words and got involved in the dispute where it wasn't even necessary. Bennett and Noah agreed that they wouldn't be friends after the show.

Yosef Won't Apologize
Remember the whole Yosef situation? Feels like it was a million years ago! He was actually there. I'm shocked he showed his face. Kenny, Blake, and Riley said that they were the most naked guys on the date and they had no problem with the date. Jason got in a bit of a screaming match with him. Chris asked him if he regretted what he said and he said he didn't. The guys said it was awful and Riley even told him that he's a terrible person.

I wish they would have let me be in attendance to let these men know in person how much their words + support have meant to me. Thank you gentlemen. From the bottom of my heart. ❤️

Chris Harrison told him it was not a good look and told him that he should apologize and he said, "No. I'm going to stay true to myself."

You can lead a horse to water...but you can’t make it apologize #TheBachelorette

Tayshia Gives Men Closure
Tayshia came out to see the guys again. You could tell it was hard for some of the guys to be in the room with her, there's still some strong feelings. (PS - check out those shoulder pads on her outfit! Thoughts?) She told Noah she had a great time with him. With Bennett, she talked about his big return and re-exit. He asked her why she had him at the rose ceremony just to let him go again. Tayshia said that him saying he loved her was a huge shock and she needed to think things over. She said their relationship wasn't as strong as some of her other ones at that point.

Blake asked Tayshia if they had more time would things have been different. She said that time wasn't the only factor, other things played into her decision. She blamed the first conversation where he said he was still getting over Clare, but it seemed like a bit of a cop-out. Riley had a hard time watching the replay of Tayshia and his relationship and their breakup. He said he felt he did himself a disservice by telling her how he felt, like, did he scare her off. She reassured him that it had nothing to do with that. After listening to Riley talk, didn't you almost want her to jump up and be like, "I changed my mind! You're the one!" But, clearly, some other decisions have been made, but who will she pick?

Hometown Dates Preview
Tuesday night, it's time for the hometown dates. There's the usual skepticism and criticisms by the families but maybe it's due to the rushed process, but the men seem to have some doubts as well. The previews showed a lot of drama and crying leading up to the big finale.