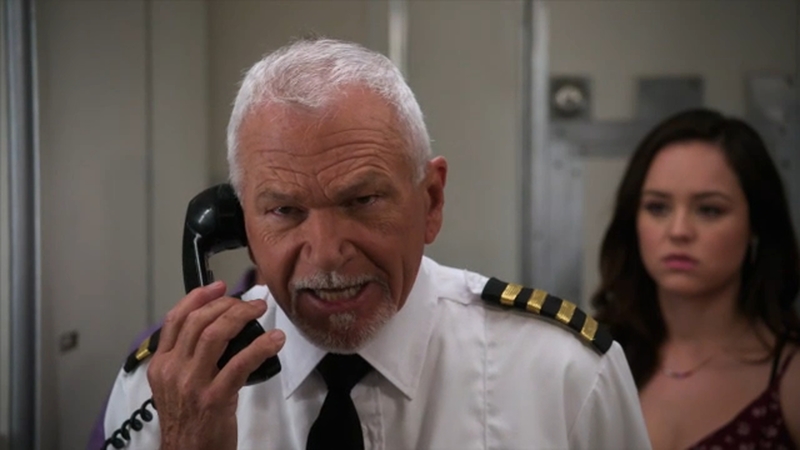 'The Goldbergs' pay homage to 'Airplane!'

NEW YORK -- Good luck, we're all counting on you. "The Goldbergs" is kicking off its 8th season premiere with an homage to the movie "Airplane!"

Beverly surprises the family with an end-of-summer vacation to Miami, and it is one thing after another that mirrors the film.

But, when the real reason for the trip comes out, Erica and the rest of her siblings aren't happy.

"We are so excited to be back working together, laughing together, and hopefully making some funny episodes for people to distract themselves with at home this year," said Hayley Orrantia, who stars as "Erica Goldberg."

You may recognize "Roger" the pilot in this episode. Guest star David Leisure was an actor from the original "Airplane!" movie where he played a member of the Hare Krishna.

"They're going to see the movie 'Airplane!' All of the jokes are going to be there. It's quite the homage to the movie which of course has been around for 40 years," Leisure said.

Filming didn't come easily with the pandemic delaying the start of production by a few weeks. But, Orrantia says they are on schedule and there are a lot of protocols to keep everyone safe in place.

"We're a little strict on our show, I think maybe as compared to some other productions, and we're happy to do it because that way we can keep everybody at work, and getting to see each other is the best part of our week," Orrantia said.

"Everybody was so congenial and they took such good care of me because of the COVID protocols," Leisure said.

This season, we'll see some different dynamics of Erica and Geoff as they face some trials and come back together. But that was all we could get out of Orrantia!
For more on what's to come this season "tune in!"

The premiere episode will be immediately followed by a second half-hour of The Goldbergs, with an episode called "The Prettiest Boy in School."

Surely, you don't want to miss it. (Don't call me Shirley!) "The Goldbergs" premiere starts at 8 p.m. EDT Wednesday on ABC.

Surely we're serious! Wednesday at 8|7c on ABC, #TheGoldbergs one hour season premiere is one you won't want to miss. pic.twitter.com/1pm454R29K