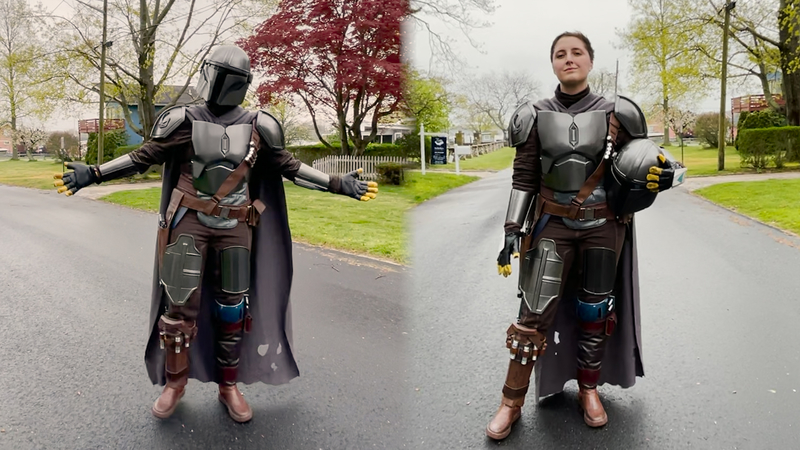 SOUTHOLD, New York -- In a galaxy far, far, away, or maybe on the east end of Long Island, you might see "The Mandalorian" walking around your neighborhood.

Not to worry, he is not looking for a bounty to catch, but rather, she is Long Island-based artist Alexa Suess.

"I love transforming into something else even just for a day or a night," said Suess. "I always love the challenge of doing something like this where there are so many pieces and details to unravel."

Her screen-accurate "Mandalorian" costume took her four months to create, and she still insists it is not finished.

When she is not wearing the armor, you can find her at her jewelry shop, Common Ground.

During the peak of the pandemic, she found herself with more free time at home, so she decided to take one of her favorite shows, "The Mandalorian," and create Mando's costume.

"I really started to appreciate and love all of the costuming in that series," said Suess. "I decided, well, why couldn't I try to make that?"

For Suess, creating costumes has been a hobby since she was a kid -- creating and learning how to sew clothes from her mom.

"We created these really intricate, beautiful Halloween costumes together every year," said Suess. "I think that's where it started."

The whole process of putting on the costume takes a little over 20 minutes, and every detail is accounted for.

Suess hopes to not only display her proudest work at New York's Comic-Con but use her costume to visit children in hospitals and other volunteer events.

"It's just so much fun to get into that character and watch other people smile," said Suess. "That's what it's all about."

Suess is excited to continue crafting more costumes from her favorite shows and cinematic universes, with Boba Fett coming up next!