Family of 12-year-old boy shot, killed by Philadelphia police speaks out during vigil

The grandparents of Thomas "TJ" Siderio say their grandson would have turned 13 on Monday.
WPVI
By Bob Brooks 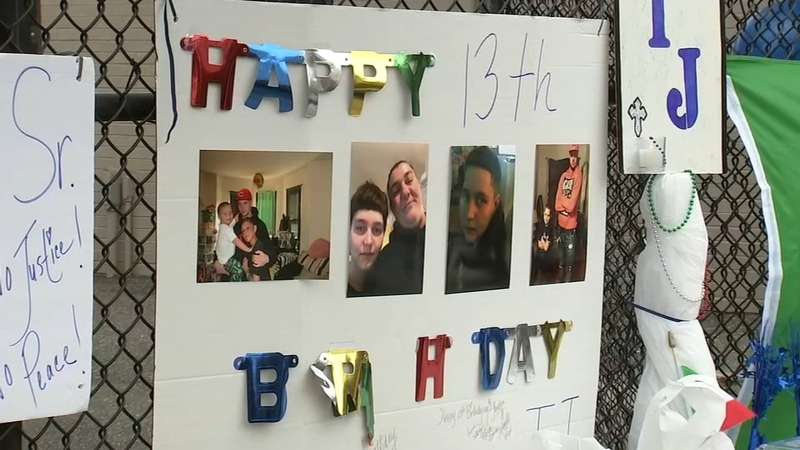 Family of boy shot, killed by Philadelphia police speaks out

PHILADELPHIA (WPVI) -- The family of a 12-year-old boy who was shot and killed by Philadelphia police spoke out for the first time since the March 1 shooting.

The grandparents of Thomas "TJ" Siderio say their grandson would have turned 13 on Monday. They say the boy was murdered by the Philadelphia police.

"I was up the street at the diner with my brother. I ran out and started crying like you won't believe," recalled Siderio's grandfather, Thomas Lawler.

"I want my grandson to rest in peace and I just want to go on," said his grandmother Mary Helen Siderio Henning.

The two grandparents gathered near where the shooting happened to hold a vigil Monday evening.

The Philadelphia police officer who shot and killed 12-year-old Thomas Siderio Jr. last week, after several officers were shot at during an investigation, will be fired.

According to police officials, four plainclothes officers in an unmarked car were conducting surveillance while responding to social media posts involving a gun.

The officers allege they saw two young males, including one identified as Siderio, on the street corner with one of them holding a gun. Next, those officers report they moved their car near the two males and turned on their emergency red and blue lights.

A short time later, the officers say they heard gunfire and a bullet came through their back window. As a result, two officers exited the vehicle and fired two shots toward Siderio who authorities said was still holding a gun.

It's reported Siderio then ran away and one of the officers chased him, firing two additional times. Siderio was struck once in the back and was killed.

But on Monday his family insists TJ did not have a gun.

"My grandson did not have a gun. Ok? I want this to end," said his grandmother.

In the days following the deadly shooting, Police Commissioner Danielle Outlaw announced that the officer who shot the boy would be fired after 30 days.

The officers involved in the shooting have not been identified.

Meanwhile, family members say TJ was killed while he was trying to get away.

"You could have tackled him. You didn't have to shoot him," said his grandfather.