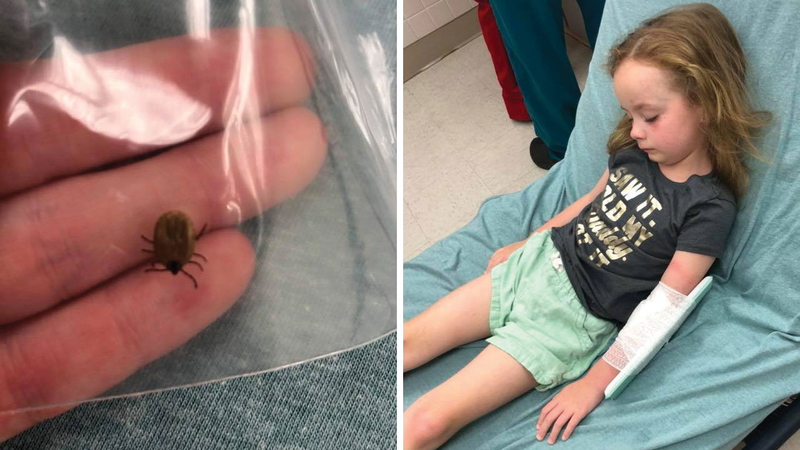 GRENADA, Miss. -- A Mississippi mom is urgently warning parents to be on the lookout for ticks after tick paralysis left her young daughter unable to walk.

In a widely shared Facebook post, Jessica Griffin wrote that her daughter, Kailyn, woke up and also had difficulty talking. Griffin took her daughter to the University of Mississippi Medical Center, and doctors performed blood tests and a CT scan to diagnose Kailyn with tick paralysis.

Griffin showed a tick in a plastic bag that appeared to have been removed from the crown of Kailyn's head and pleaded with parents to check their children for ticks.

"PLEASE for the love of god check your kids for ticks! It's more common in children than it is adults!" she wrote. "We are being admitted to the hospital for observation and we're hoping her balance gets straightened out! Prayers for this baby! Scary is [an] UNDERSTATEMENT!"

According to the Centers for Disease Control, tick paralysis is believed to be caused by a toxin found in tick saliva, and symptoms often resolve within 24 hours of removing the tick.

Griffin later posted an update saying that Kailyn's symptoms had subsided and that she was "completely back to normal."

Unlike many other bites, tick bites often don't initially hurt or itch, according to WebMD. While they can initially be small, a tick that has latched onto a human will swell up as it feeds and become more visible.