50 years of Title IX: How the law paved the way for champions, careers

Title IX is "a game-changer for our society," said A-10 Commissioner Bernadette McGlade.
WPVI
By TaRhonda Thomas 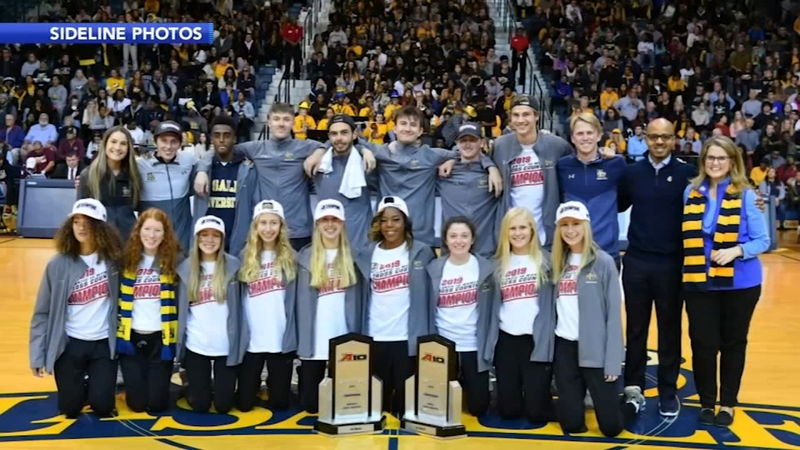 50 years of Title IX: How the law paved the way for champions, careers

WILMINGTON, Delaware (WPVI) -- Earlier this month, a three-pointer whipped the crowd into a frenzy as LaSalle University faced off against George Washington University in the Atlantic 10 Women's Championship tournament. But 50 year ago, the moment wouldn't have happened because there was no championship for basketball or any other women's sport. That is, until Title IX came about.

"It's a game-changer for our society," said A-10 Commissioner Bernadette McGlade.

Marking its 50th year, Title IX requires schools that get federal funds to operate educational programs and activities equally for men and women. The law was signed in 1972, which was just in time to open doors for McGlade.

"Oh it's had tremendous impact," she said. "I graduated right across the river in South Jersey from high school in '76. And was fortunate to get a scholarship to University of North Carolina for basketball. And that meant the world to me."

McGlade went on to have a career in athletics, which she credits to opportunities created by Title IX.

"It really put women of my generation on this unbelievable path to success in athletics," she said noting that she is one of few women to hold her type of position. "There are only 32 commissioners in Division 1, and here I sit in one of those seats."

That's not to say that everyone was immediately complied with the call for equity in sports.

"When the law was passed in 1972, it took a couple years for people to really get on board," said McGlade.

Inequities still exist, as evidenced by the women's lackluster facilities at last year's NCAA tournament. Whereas the men's basketball players had a large room full of stacks of equipment and weights, the women's training room had a single rack of dumbbells.

"I was truly shocked," said McGlade of seeing the video one female basketball player posted of the inequity, "because in many respects we'd moved past that."

It's one reason why A-10 officials were particularly proud of this year's conference tournament. The venue where the games were played was a premium space-home to the Philadelphia 76ers G-league team.

"They can say I've played on the same court that NBA players have played on," said LaSalle University Athletic Director Brian Baptiste.

Baptiste appreciates Title IX for what it guarantees his athletes and his three daughters who have often accompanied him to women's games.

McGlade views equity in employment as the next challenge for Title IX.

"The differences in men coaching men's sports and women coaching women's sports is staggering right now," she said, adding that equal pay is also still an issue. "I think when we look at the gender gap as far as the pay scale is concerned."

It's the same issue she faced decades ago when a less-experienced man was hired to fill the same role she had. Even though she had more experience, she was still paid less and got a problematic response from her supervisor when demanded equal pay.

"He asked me what I was making and I told him. And he said 'that's pretty good pay for a woman,'" she recalls.

"It's important. The opportunity to be able to compete for a championship," said Baptiste.

The NCAA will continue to mark the 50th anniversary of Title IX with the celebration culminating at the 2023 Women's NCAA Final Four.