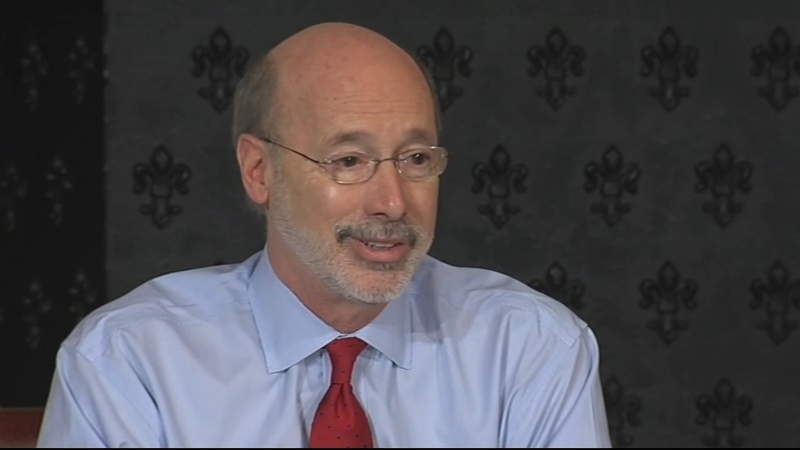 PHILADELPHIA (WPVI) -- Pennsylvania Gov. Tom Wolf said Wednesday he has contracted COVID-19 and is isolating at home, revealing the diagnosis after several members of his security detail recently tested positive for the coronavirus.

The second-term Democrat said a routine test on Tuesday detected the virus.

"I have no symptoms and am feeling well," Wolf said in a statement. "I am following CDC and Department of Health guidelines."

Wolf, who is 72, said he continues to work remotely.

In 2016, Wolf was diagnosed with a treatable form of prostate cancer. A year later he received a clean bill of health.

Pennsylvania Gov. Tom Wolf said he has contracted COVID-19 and is isolating at home, revealing the diagnosis after several members of his security detail recently tested positive for the coronavirus.

Experts say his cancer should play a minor or even no role in his recovery.

Kutikov says that is especially true if Wolf had a very treatable case, which it was.

"The person resumes their usual life and really doesn't have big consequences from cancer treatments as far as their overall health is concerned," he said.

Wolf's spouse, Frances Wolf, has been tested but has not received the result, Wolf said. She is quarantining with him at their home in Mount Wolf, near York.

Wolf is one of several governors who have tested positive for the virus that causes COVID-19, including the governors of Oklahoma, Missouri, Virginia, Nevada and Colorado. President Donald Trump also contracted the virus.

Wolf's public schedule for the past week had just one event -- a virtual news conference about the pandemic on Monday where he appeared along with his health secretary, Dr. Rachel Levine, and one of her deputies. All wore masks as they took turns at the podium.

People considered to be "close contacts" of Wolf have been told of their possible exposure and are now in quarantine, including Levine and several members of his senior staff. All have tested negative so far, according to the governor's office.

Wolf's spokesperson, Lyndsay Kensinger, said "multiple members" of the governor's security detail recently tested positive for COVID-19. She said Wolf has been primarily at his home or working from the offices of the Pennsylvania Emergency Management Agency over the past few months.

Last month, the Wolf administration strengthened its mask mandate and required out-of-state travelers to test negative for the coronavirus before arrival. But infections, hospitalizations and deaths have continued to increase sharply in the state, prompting Wolf to reveal Monday that he is considering new mitigation measures.

Pennsylvania is averaging about 10,000 new confirmed cases per day, up more than 50% in two weeks, according to an AP analysis of data from The COVID Tracking Project. Hospitalizations have risen tenfold this fall. The state is averaging 140 deaths per day, up 64% since Nov. 24.

"As this virus rages, my positive test is a reminder that no one is immune from COVID, that following all precautions as I have done is not a guarantee, but it is what we know to be vital to stopping the spread of the disease," he said Wednesday.

Wolf is a former state revenue secretary and businessman who spent more than $10 million of his own money to win the Democratic gubernatorial primary nearly six years ago. He easily won reelection in 2018.