Study: Kids in US are using too much toothpaste 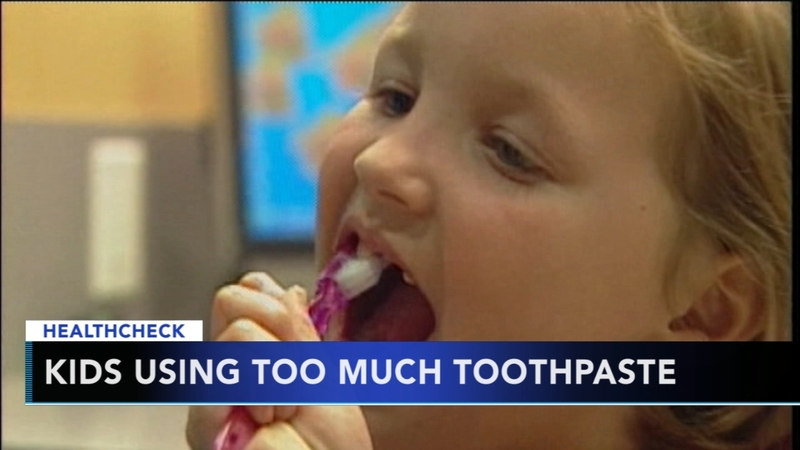 CDC: Kids using too much toothpaste

NEW YORK -- Too many young kids are using too much toothpaste, increasing their risk of streaky or splotchy teeth when they get older, according to a government survey released Thursday.

About 40 percent of kids ages 3 to 6 used a brush that was full or half-full of toothpaste, even though experts recommend no more than a pea-sized amount, the study found.

The Centers for Disease Control and Prevention findings were based on a survey of parents of more than 5,000 kids ages 3 to 15.

Health officials recommend that all people drink fluoridated water, and that everyone 2 or older brush twice a day with fluoride toothpaste.

But the amount is important. Children under 3 are only supposed to use a smear of toothpaste the size of a grain of rice. Kids 3 to 6 are supposed to keep it to a pea-sized amount.

"Fluoride is a wonderful benefit but it needs to be used carefully," said Dr. Mary Hayes, a pediatric dentist in Chicago.

Young kids may push for independence in brushing their teeth, but kids' toothpaste tastes sweet.

"You don't want them eating it like food," Hayes said. "We want the parent to be in charge of the toothbrush and the toothpaste."

Fluoride is a mineral found in water and soil. More than 70 years ago, scientists discovered that people whose drinking water naturally had more fluoride also had fewer cavities. That led to efforts to add fluoride to tap water, toothpaste, mouthwash and other products. Experts say fluoride had helped drive down rates of tooth decay in U.S. teens and adults.

But too much fluoride when teeth are forming can lead to tooth streaking or spottiness - known as dental fluorosis. In extreme cases, teeth can be pitted by the mineral, though many cases are so mild only dentists notice it.

Past studies have suggested fluorosis has been increasing for at least three decades, and can affect as many as 2 out of 5 adolescents.

The new study did not follow the kids through time or try to determine how many developed streaked or spotty teeth as a result of using too much toothpaste.

The authors acknowledged other limitations. Parents might have misremembered how much toothpaste kids used when they were younger. Also, the survey didn't ask specifically about what kinds of toothpaste were used; not all kinds of children's toothpaste have fluoride in them.

The study found about 60 percent of kids brushed their teeth twice a day. It also found that roughly 20 percent of white and black kids, and 30 percent of Hispanic kids, didn't start brushing until they were 3 or older.