Jumping into the ER: Safety experts warn of dangers at indoor trampoline parks 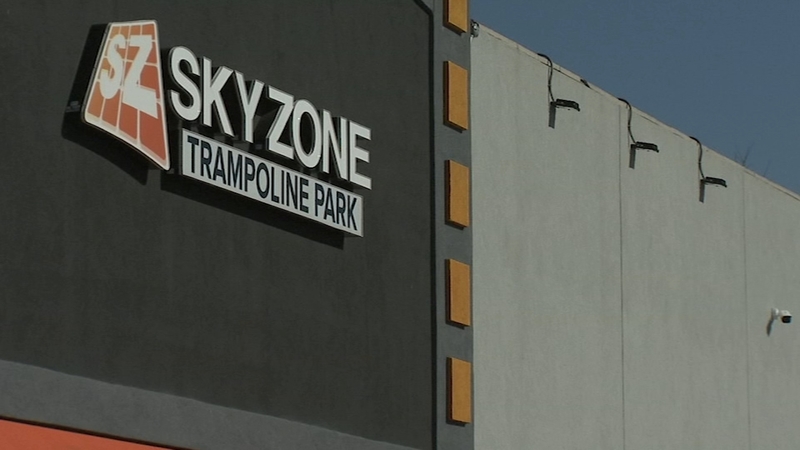 Trampoline parks are a popular spot for children's birthday parties and to get energy out of rambunctious kids.

But some parents may be unaware of the potential dangers inside.

An Action News investigation uncovered hundreds of dispatch calls to trampoline parks in our area over three years. As these parks explode in popularity, critics say some customers are jumping straight into the ER.

A fractured ankle during trampoline dodge-ball, a broken neck flipping into the foam pit, a severed foot, and a teen who suffered a severe brain injury after falling through a hole in a trampoline are just some of the injuries Action News found.

Deslyn Audain remembers her son's screams vividly after he was injured at a New Jersey Sky Zone last May.

"I see him try and get up and he goes 'Daddy,'" said Audain.

Once at the hospital, Audain learned her 4-year-old son Jeremiah broke his femur.

"As a parent, you're just thinking, 'Well, how dangerous can a trampoline park be?'" she added.

But an Action New Investigation found more than three-hundred 911 dispatch calls to 14 trampoline parks in the Delaware Valley from 2015-through the midway point of 2018.

Video from inside trampoline parks obtained by Action News shows just how fast injuries can happen.

"What would your advice be to the mother or father who just got an invite to a trampoline park for a birthday party?" asked Investigative Reporter Chad Pradelli.

McPherson is also an expert witness in several lawsuits against trampoline parks. He warns dispatch calls only partially tell the story of the number of injuries occurring inside.

He adds, "Obviously the ones where the parents just scoop their kid up and put them in the car and take them to the hospital go unreported."

Those injuries include Jeremiah and the mother of a little girl who broke her leg when she was "double-bounced" by an older child.

McPherson tells us being "double-bounced" is when one trampolinist affects the rebound of another. He also said it is difficult to prevent that from happening in trampoline parks.

"What's underneath those pads reveals that all the trampolines are interconnected either on a cable or on a steel extrusion. What you end up having is one big trampoline," he said.

David Chazen, a New Jersey attorney, represents Audain's son, as well as a half dozen other clients who are suing Sky Zone after being injured.

"A number of my clients have been injured because they're jumping from trampoline to trampoline, so they go from say a soft surface in the middle of a trampoline, to a very hard surface on the outside of the trampoline," he said.

Sky Zone's liability waivers are a sobering read and describe trampolining as "inherently and obviously dangerous." The waiver also warns of serious injuries including serious physical or emotional injury, paralysis and even death.

Chazen adds the liability waiver customers are forced to sign is intimidating.

Faced with a lawsuit in 2017 which alleged their releases illegally "waived certain rights of minor under New Jersey law," Sky Zone settled a class action lawsuit, denying the allegations and saying they no longer use that language in their waivers.

Audain's waiver didn't waive Jeremiah's rights, but did force the family into arbitration.

In a statement, Sky Zone declined to comment on pending litigation.

"While we do not comment on pending litigation or matters specific to our guests, we are saddened about any injury that occurs and empathize with the family members when these situations arise. We take all injuries very seriously and are deeply committed to the safety of our Guests and team. We invest in best-in-class equipment and take several measures to reduce these risks, such as daily equipment and area spot checks, and educate our guests about safety by posting important safety rules and guidelines throughout our parks. Additionally, we station court monitors near all trampoline attractions to help enforce those rules and monitor guest activity. And, we are also committed to ongoing evaluations to promote guest safety. When there is an injury, all incidents are analyzed internally and we consult with third-party industry experts to continuously learn from them and create the safest environment possible for Guests."

Critics of the trampoline parks industry say it needs to be regulated. A spokesperson for the The International Association of Trampoline Park Owners in Hershey, Pennsylvania said it plans to implement more stringent self-regulatory standards in 2020 including third party inspections of parks.

Statement from the American Academy of Pediatrics

Statement from the International Association of Trampoline Parks