Could flipping board at 30th Street Station in Philadelphia be staying after all?

WPVI
PHILADELPHIA (WPVI) -- There's a glimmer of hope that the flipping board at Philadelphia's 30th Street Station may not be clicking its last clack anytime soon.

Rep. Brendan Boyle told Action News on Tuesday that Amtrak may reconsider the plan to replace the board with a digital sign.

Boyle said that came during a lengthy discussion with Amtrak CEO Richard Anderson.

According to Boyle, Anderson said the company will "re-examine" the issue in January.

Could flipping board at 30th Street Station be staying after all? Watch this report from Action News at 4:30pm on December 11, 2018.

Amtrak announced the plan to replace the board, officially known as a Solari board, late last month.

Any change in that decision would have to happen soon. The replacement is scheduled for January.

If it is removed, the flipping board would reportedly be sent to The Railroad Museum of Pennsylvania in Strasburg, about 60 miles west of Philadelphia in Amish country.

End of an era: Flipping board at 30th Street Station to be replaced in January. Watch this 6abc.com update from November 30, 2018.

The old-time clicking sound of the flipping panels on the iconic schedule board is all too familiar to many people traveling through 30th Street Station.

The world-famous board has been at 30th Street Station since the 1970s.

Once prevalent at airports and train stations around the world, they are now nearly extinct due to aging software and the parts used to run them.
EMBED More News Videos

It's more than a transit hub. 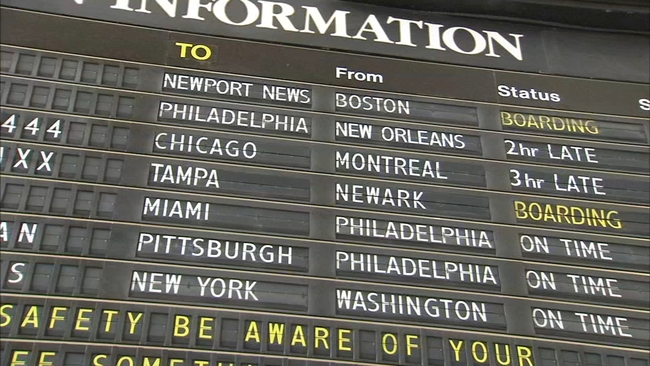