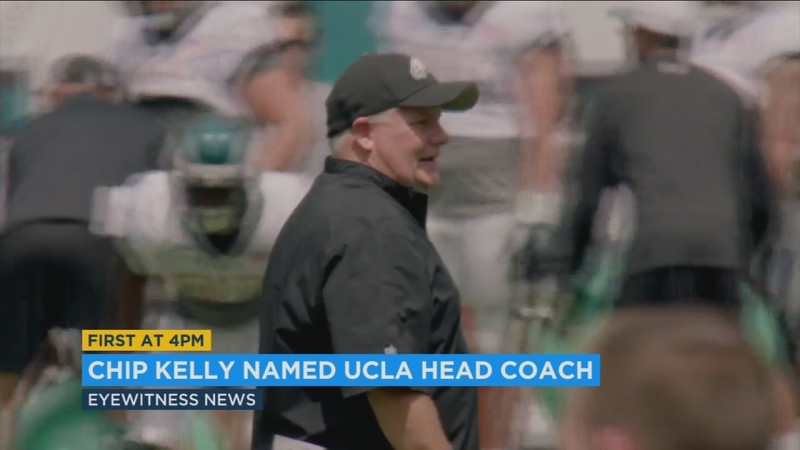 LOS ANGELES (WPVI) -- UCLA students and football fans are reacting with excitement and anticipation at the hiring of Chip Kelly as the Bruins' new head football coach.

Kelly has agreed to a five-year, $23.3 million contract with the program.

"Everyone is excited about it," said UCLA football fan Librado Barocio. "We got a good win last night and heading to a bowl game, so things are getting better here for the UCLA football program."

Chip Kelly is the new head coach for UCLA Football.

UCLA fired Jim Mora after last week's loss to USC, saying the last two years of his six at the school had not met expectations. He compiled a 46-30 record.

The program then brought in Kelly, who was best known for a dominant coaching performance in four seasons at Oregon, as well as less-successful stints in the NFL with the San Francisco 49ers and Philadelphia Eagles.

"He had an awesome run at Oregon," said UCLA fan John Cate. "Obviously things in Philadelphia and San Francisco didn't go as expected. Hopefully he can get the Bruins back on and do what he did with the (Oregon) Ducks."

Kelly, the 17th head coach in the school's history, is expected to be introduced to the public at UCLA on Monday.

"It is an absolute honor to join the Bruin Family, and I am grateful to Chancellor Block and to Dan Guerrero for this incredible opportunity," Kelly said in a statement released by the school. "UCLA is a world-class institution with a distinguished history in athletics, and we will do our part to uphold its tradition of excellence."