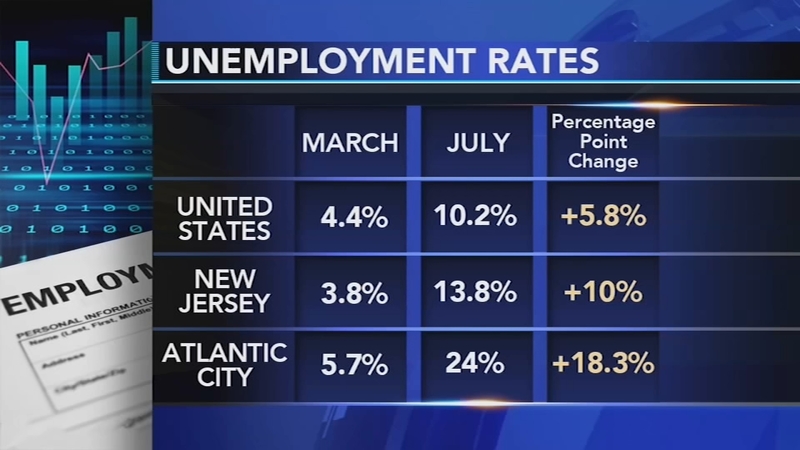 ATLANTIC CITY, New Jersey (WPVI) -- It's no surprise that Atlantic City is suffering. The city relies on tourists, the hospitality, and casino industries which have both taken a huge hit under the pandemic.

There are turbulent waters where unemployment is concerned in Atlantic City. "With what's going on, we're all just so worried and scared," said Victoria Hillesheim of Northfield New Jersey.


Data from the U.S. Department of Labor show unemployment in Atlantic City is at 24 percent.

The data also shows the astronomical difference in Atlantic City's unemployment rate, compared to the state which is at 13.8 percent.

As well as the country, where Atlantic City was two times higher than the national average in July at 10.2 percent.

There are people behind these numbers, like Hillesheim who is anxious to one day go back to work as a food server at a local casino.

So, like many other casino workers, Victoria still won't have a job.

"We will have about 7,000 of our 10,000 members back to work but that still leaves 3,000 workers without a job," said Donna Decaprio, financial secretary-treasurer for Unite Here Local.

To help unemployed hospitality and casino workers, a food drive was held at Baeder Field in collaboration from multiple agencies, who have raised money to help 1800 struggling families.

But even Thursday, the gates were closed early once they ran out of food.

"No one can sustain these numbers long term, and until there's a vaccine there's very little hope of returning to pre-pandemic levels," said Shenker.

She mentions that even when people get their jobs back, the majority of them will be in debt. So before the economy is stimulated, people will be focusing on catching up on bills before going on vacation or spending money for a fun night out at a casino.
Report a correction or typo
Related topics:
societyatlantic citycasinosocietyunemployment
Copyright © 2022 WPVI-TV. All Rights Reserved.
TOP STORIES
Man killed in apparent road rage shooting in Delco identified
Man snaps pic of vintage Burger King walled-off inside Delaware mall
Police searching for missing 1-year-old girl in Philadelphia
Bills limiting LGBTQ instruction, trans athletes pass Pa. Senate
Man dies while cutting down tree in Berks County
Troubleshooters: PGW assessing Weather Normalization Adjustments
Talks continue as AC casino strike deadlines loom
Show More
Family members identify woman killed after man fires into bar
Shooting leaves 4 injured in East Germantown
4 charged in deaths of 53 migrants in trailer in San Antonio, DOJ says
Pa. House sets up committee to consider Philly DA's impeachment
Jersey shore businesses ready for the 4th
More TOP STORIES News